As the story goes, those lessons inspired Gellini to relocate to New Orleans after graduation. Gellini quickly became involved in the city’s beloved Mardi Gras Indian community, eventually attending rehearsals for Mardi Gras marches. Gellini met  Monk Boudreaux, Big Chief of the Golden Eagles and one of the city’s most widely known and popular Mardi Gras Indian vocalists at those rehearsals. Coincidentally, Boudreaux is the grandfather of Cha Wa’s frontman J’Wan Boudreaux.

Unsurprisingly those rehearsals eventually turned into Gellini performing alongside the New Orleans Mardi Gras Indian legend. Gellini met J’Wan Boudreaux while the younger Boudreaux was still attending high school, but shortly after, J’Wan joined the band as their frontman. Since then, Cha Wa have established a sound and aesthetic that simultaneously draws from New Orleans’ Mardi Gras Indian tradition and the city’s beloved rhythm and blues and funk sounds through the release of three albums — 2016’s debut Funk ‘N’ Feathers, 2018’s Grammy Award-nominated Spyboy and their most recent album, My People, which was released last week.

“Mardi Gras Indian tradition and culture goes back over 250 years in the city of New Orleans. And it’s a culture that derives from men of color wanting to celebrate the Mardi Gras holiday but weren’t able to at the time,” Boudreaux explained in an interview with NPR. “So what they did was they created these elaborate suits…it represented the Native Americans that helped the Blacks escape slavery, and they actually helped them throughout the swamps and the bywater to get where they needed to go. So to pay homage to those natives, these men created what we call today Indian suits.” On the album Cha Wa founder Joe Gellni adds that the group “”tapped into that collective unconscious of what it is to live in New Orleans and to see all the nuances and ways that different people of color in the band actually experience racism — what sort of plight we’re facing in New Orleans socially and culturally, and class-wise and environmentally.”

My People‘s latest single, album title track “My People” is a strutting bit of funk that’s one-part classic second line march, one part The Meters, one part Nite Tripper-era Dr. John centered around a shuffling rhythm, shimmering Rhodes, a big horn section and call and response vocals singing lyrics that remind people of the universal facts of life: the rich get rich, while the sick get sicker; that while we have our differences, we have much more in common than we expect — we’ll all experience heartbreak, despair, frustration, loss, death. And if we can see that the universe in others, it may mean we get closer to understanding someone else’s life and their pain.

Although they haven’t been able to tour, as a result of the pandemic, but they have made a recent appearance on Good Morning America and on NPR, and that has allowed them to spread the album’s music and message to a much wider audience — and not just to those who will agree with them, but as Boudreaux explained to NPR “also to the people who may not be so open…just try to open up your eyes and see the world through the lens of the next person – the person that’s next to you, being held down by these different things like systematic oppression…if we don’t say anything about it, then no one will actually understand and know that we’re with them.”

Formed in 2018 and  led by its founding member and bandleader JayJay (trumpet), the Montpellier, France-based brass act JayJayBrass Band specializes in a modern take on the classic brass band sound — one that features elements of hip-hop and funk. Last year, the band went into the studio to record their debut effort, which was released earlier this year and  features 9 original compositions and a cover of an Anderson .Paak song, as well as guest vocals from local emcee Loïs Hammel.

The album’s “Radio Funk” is a swaggering and strutting bit of New Orleans-styled brass centered around some Nile Rodgers-like funk guitar, swinging saxophone and trumpet lines, some muscular low end from the sousaphone within a dance floor friendly composition with big hooks. Loïs Hammel contributes a few party friendly rhymes on an already party friendly track. Considering how bleak things in our world are at the moment, a few moments of levity seem necessary.

Since relocating to Denver, the brass octet have quickly become “arguably the most popular street [music] in Denver,” according to Westword Magazine while developing and honing their own take on traditional New Orleans brass, one that also finds the band infusing funk, pop and hip-hop influences.

Drawing from their shared backgrounds in New Orleans-styled brass bands and HBCU marching bands, with nods to New Orleans brass, bounce and hip-hop, Brothers of Brass’ swaggering debut single “Legal State” is centered around a strutting sousaphone line, energetic brass lines and a dexterous and expressive sax solos to create a decidedly upbeat, party anthem. But at its core is a sobering yet fiery reflection on the inequities of cannabis remaining illegal across the South while it’s legal and enjoyed recreationally in their home state of Colorado.

Hot Hand Band is an emerging Brooklyn-based brass ensemble featuring multi-instrumentalist Kevin Moehringer, Kevin Raczka (drums), Dave Hassell (bass) and a cast of collaborators. Since the band’s formation back in 2016, they’ve honed their sound, playing at local restaurants and bars across town. eventually bringing their sound, which meshes New Orleans brass, jazz, funk, hip-hop and more across the world.

Building upon a growing profile, the Brooklyn-based brass ensemble will be releasing their full-length debut through Swoon City Music during the early party of this year. The member of Hot Hand Band begin the year with a swaggering mash-up of Grammy Award-winning rapper Chance the Rapper’s “No Problem” and Bone Thugs-N-Harmony “Crossroads.” ““A few of our friends were involved in the production and performance of Chance the Rapper’s ‘No Problem,'” the band’s Kevin Moehringer says in press notes. “It’s a Grammy-Award-winning song, and for good reason! Chance is an inspiring artist and we felt like this song would translate well to the brass band format.” 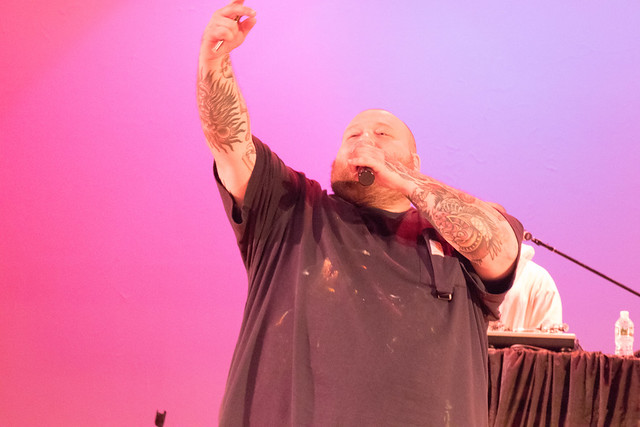 The band is prepping for a series of live shows in the NYC area, which you can see below — and to build up buzz for those shows, the collective released an incredibly funky brass-backed interpretation of Rage’s “Guerrilla Radio” — and with vocalist Sophia Urista confidently taking filling the vocal role of Zack de la Rocha, there’s a decided and forceful reminder that women have long been the heart, soul and moral backbone of any resistance movement against corrupt and venal power — but also serves as a reminder, that music is a powerful weapon.