Over the past handful of months this year, I’ve written a bit about the up-and-coming Reykjavik, Iceland-based synth-based post-punk trio Kælan Mikla. Last year was a breakthrough year for the Icelandic act: they played a set at The Netherlands’ Roadburn Festival, were championed by The Cure’s Robert Smith and toured with King Dude, and as you may recall, all of that happened before the release of Nótt eftir nott.

The members of Kælan Mikla are currently in the middle of a lengthy Stateside tour that included a New York area stop last night. (You can check out the remaining tour dates below) Sadly, I had to miss that one — but in the meantime, the trio’s latest single off Nótt eftir nott is the brooding  “Hvernig kemst ég upp.” Centered around layers of arpeggiated synths, a motorik-like groove, tweeter and woofer rocking low end, thumping beats, the industrial-leaning, synth-driven track finds the Icelandic act employing a sound that will likely bring early Depeche Mode and New Order immediately to mind. 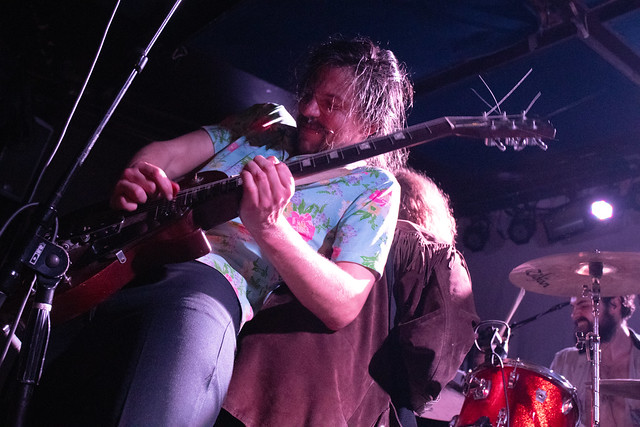 Earlier this month, I wrote about the Reykjavik, Iceland-based synth-based post-punk act Kælan Mikla, and as you may recall, this year has proven to be a breakthrough year for them so far: they played a critically applauded set at this year’s Roadburn Festival, were championed by The Cure’s Robert Smith and toured with King Dude — and all of this before the release of their forthcoming album Nótt eftir nott, which is slated for a November 9, 2018 release through Artoffact Records.
“Nornalagið,” Nótt eftir nott’s first single was a chilly yet dance floor friendly track, centered around a motorik groove, shimmering and arpeggiated synths. Punctuated by piercing waiting throughout, the track managed to be both eerily atmospheric and cinematic, evoking a storm slowly rolling across enormous skies. The album’s latest single “Næturblóm,” continues in a similar vein as its predecessor — centered around an arrangement of shimmering synths, angular bass lines, four-on-the-floor drumming, industrial clang and clatter and Laufey Soffía’s ethereal vocals, the track manages to be atmospheric and cinematic; however, the song may arguably be one of the most euphoric songs they’ve written to date as it manages to recall Siouxsie and the Banshees and the classic 4AD Records sound simultaneously.

Interestingly, as the band explains in press notes, the song’s title “Næturblóm” translates into the English as “Nightflowers,” and its lyrics were initially a poem that the band’s Laufey Soffía wrote and then gave to Sólveig Matthildur as a birthday present. ” It’s about how Laufey sees Sólveig as a beautiful flower that blooms in the winter darkness. An everlasting reminder of their friendship.”

The members of the Icelandic post-punk trio will be playing an album release show on November 8, 2018 at this year’s Iceland Airwaves and to build up buzz for the momentous occasion and for a handful of live dates across Scandinavia, they’ve released a live video performing “Næturblóm” in an abandoned factory space.

Comprised of Sólveig Matthildur,  Margrét Rósa and Laufey Soffía, the Reykjavik, Iceland-based synth-based post-punk act Kælan Mikla have had a breakthrough year so far: they played a critically applauded set at this year’s Roadburn Festival, were championed by The Cure’s Robert Smith and toured with King Dude — and all of this before the release of their forthcoming album Nótt eftir nott, which is slated for a November 9, 2018 release through Artoffact Records.

The members of the Icelandic post-punk trio will be playing an album release show on November 8, 2018 at this year’s Iceland Airwaves but before then, the album’s first official single is the chilly yet dance floor friendly, synth-led track “Nornalagið” — and the track, which is centered by a motorik groove and punctuated by piercing wailing manages to be both eerily atmospheric and cinematic, evoking a storm rolling across enormous skies.

Now, if you’ve been frequenting this site over the past three years or so of its almost eight-year history, you’ve likely come across a handful of posts featuring the Richmond, Virginia-based doom metal band WINDHAND. Currently comprised of Dorthia Cottrell (vocals), Garrett Morris (guitar), Parker Chandler (bass) and Ryan Wolfe (drums), the Northern Virginia-based metal act formed back in 2009 and with the 2010 release of a self-recorded two track CD, the band quickly garnered comparisons to Electric Wizard, The Devil’s Blood and Black Sabbath.  Building upon a growing profile, their 2012 self-titled debut became an underground hit and sold out multiple vinyl pressings within a few months.

2013 saw WINDHAND sign to Relapse Records, before collaborating with Richmond, VA-based band Cough on a split single “Reflection of the Negative,” which was released to critical praise from the likes of Pitchfork and others. WINDHAND promptly followed that up with the release of their critically applauded sophomore effort Soma, an effort that received praise from Stereogum, Spin, LA Weekly, Revolver, Invisible Oranges, MetalSucks, Metal Injection, Rolling Stone and NPR — with Pitchfork naming the album as one of the third best metal releases of the year. Adding to a breakthrough year, the members of the Richmond, VA-based doom metal band had spent the bulk of 2013 and 2014 touring North America, the European Union, and Australia with Sleep, High on Fire, Dead Meadow and Kvelertak, as well as the festival circuit, wth appearances at Roadburn, SXSW, Scion Rock Fest, Day of the Shred and Maryland Deathfest. They closed out a breakthrough and breakneck period with a critically praised split album,in which they collaborated with Swedish doom metal act Salem’s Pot.

2015’s Jack Endino-produced, third full-length album, Grief’s Internal Flower featured album singles Crypt Key.” and “Two Urns” which unsurprisingly managed to further cement their reputation for crafting sludgy, murky, punishing and downtempo dirges.  At the end of last year, the members of the band announced that they would be releasing a split album with fellow Virginians Satan’s Satyrs, which Relapse Records will release on Friday, and as you may recall, the album’s first single “Old Evil” was a mosh pit worthy sound that featured some impressive psych rock meets metal god guitar work and an anthemic hook that belies the lurking evil within the song. The split album’s latest single “Three Sisters” is an epic, slow-burning and lysergic dirge with a scorching and smoking guitar line, explosive burst of organ and wobbling bass over which Cottrell’s vocals ethereally float over, like a feverish dream-like portent.