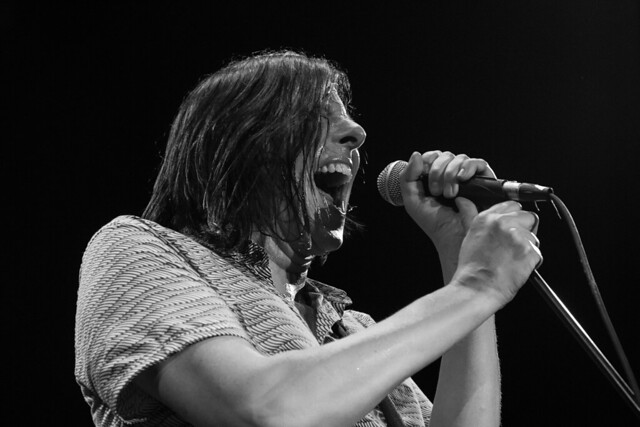 Lightfoot’s third full-length album New Mistakes is slated for an October 13, 2017 through Sonic Unyon Records, and as you may recall, the album’s first single “Paradise” found the Hamilton, ON-based JOVM mainstay thoroughly reinventing her sound while still retaining some of the essential elements that first caught the attention of this site and elsewhere — including Lightfoot’s personal and deeply heartfelt lyrics and booming, soulful vocals; however, “Paradise” may arguably be one of the most anthemic songs she’s released to date, as it’s rooted around the sort of bluesy shout and stomp reminiscent of T. Bone Burnett, The Black Keys and others. Of course, the song clearly pushes the Canadian JOVM mainstay’s sound towards a decided, blues rock direction — but it does so while revealing an artist, who has found her own, unique voice.

New Mistakes‘ latest single, the atmospheric  “Norma Gale” may arguably be Lightfoot’s most singer/songwriter-like songs, as it was inspired by her meeting and befriending Norma Gale, a country singer/songwriter, who developed a great following in Nashville and wound up playing with Johnny Cash, Loretta Lynn and Conway Twitty during the 1970s. As Lightfoot explains in press notes, the song chronicles Gale’s life, as she’s trying to make a name for herself as a musician — while raising a young son as a single parent. “I kept in touch with Norma and her son, and let them know when I finally made it to Nashville to do some writing, but unfortunately, she had passed away two weeks earlier,” Lightfoot recalls.  Unsurprisingly, based on Lightfoot’s own work, I can see why she would be drawn to Gale and her story — and as a result, Lightfoot empathetically conveys the strength and resolve to achieve your dreams, even when things are at their most desperate. And as a musician, how can you not see yourself in the struggle of those before you, who have tried to make a name for themselves?

If you had been frequenting this site over the course of last year, you may have come across a couple of posts featuring the Hamilton, ON-based singer/songwriter and guitarist Terra Lightfoot. And as you may recall, although she may be be best known as a member of Canadian country act Dinner Belles, Lightfoot, who is personally influenced by Maybelle Carter, Sister Rosetta Tharpe, Lead Belly, Lightnin’ Hopkins, Sam Cooke, Otis Redding, Nina Simone and Billie Holiday has developed a reputation for crafting raw, slow-burning singer/songwriter-based guitar pop that nodded at  Patsy Cline and others, as you would have heard on “All Alone,” off her sophomore effort, Every Time My Mind Runs Wild and a gorgeous and mournful, solo rendition of “I’ll Be Home For Christmas” that drew influence from Chet Atkins‘ instrumental rendition. Adding to a growing profile. Lightfoot has opened for the likes of  Emmylou Harris, Ron Sexsmith, Gordon Lightfoot, Blue Rodeo, Rheostatics, Grace Potter, The Both, Built to Spill, Sloan, Arkells, Basia Bulat, Albert Lee, James Burton, The Sadies, Steve Strongman, Monster Truck and Daniel Lanois on stages across France, the UK and her native Canada.

Lightfoot’s third full-length album New Mistakes is slated for an October 13, 2017 through Sonic Unyon Records and as you’ll hear on the album’s  first single “Paradise,” the album finds Lightfoot thoroughly reinventing her sound while retaining some of the elements that first caught the attention of this site and the rest of the blogosphere — while still being based around Lightfoot’s personal and deeply heartfelt lyrics and booming, soulful vocals, the song is arguably one of her most anthemic songs, rooted around the sort of bluesy shout and stomp reminiscent of T. Bone Burnett, The Black Keys and others. And although it’s a decided, contemporary rock-based, modernization of her sound, it reveals a singer/songwriter, who is actively coalescing her influences into a clear and unique sound and vision.

As Lightfoot explains in press notes, “For me, ‘Paradise’ is about letting go of perfection in love. It’s not wrestling with the problems and missteps in our relationships but embracing them. I think it’s a more realistic way to look at love and it gives me some comfort to know I’m not standing there with rose-coloured glasses on.  ‘Paradise’ actually started out as a different song called ‘Thunder’ that was a huge hit at our shows. On the last day of tracking the record, I had this crazy idea that I wanted to change the words because I wasn’t happy with all of them, so I set up a pillow fort and a guitar in the tracking room, went to work… and ended up with a new verse melody and completely different lyrics. Gus and Werner liked the new verse so much they said, ‘Okay, now go write a chorus to match that verse” — and ‘Paradise’ was born!

The recently released music video for “Paradise” is a highly symbolic video that features Lightfoot playing solo and then accompanied with her incredibly dapper backing band in an abandoned factory with an unusual intimacy. Along with that there’s a sequence that features Lightfoot dancing joyously in the rain — perhaps after recognizing a truly adult and realistic version of love.

Lightfoot’s sophomore effort Every Time My Mind Runs Wild was released earlier this year through Sonic Unyon Records and if you’ve been frequenting this site, you may recall that I had written about the Canadian singer/songwriter’s bluesy and heartfelt single “All Alone,” a single reminiscent of a more muscular version of Patsy Cline’s “Crazy” and “Walkin’ After Midnight,” complete with the same heartache at its core. Just in time for the holidays, Lightfoot released an understated solo rendition of the Christmas season classic “I’ll Be Home For Christmas,” which she played for the first time at CBC’s Sound of the Season last year and she recently recorded live at McMaster University’s LIVELab. Interestingly, Lightfoot’s self-accompanied guitar arrangement draws from Chet Atkins’ instrumental rendition.

As Lightfoot explains in press notes about her rendition of “I’ll Be Home For Christmas: “I think I feel comfortable delivering a song like ‘I’ll Be Home For Christmas’ because I can really live inside that gentle mood and melody. The heartfelt lyrics, that sense of fragile security. The melody and chords are stunning, but as a songwriter I also appreciate the uncertainty and underlying tension in the plot: you’re not sure if you’ll make it home, or maybe your home is long gone and you’re wishing you could go back. I don’t know if I would be able to deliver a song like ‘Joy to the World’ with quite as much conviction. ” Interestingly, in some way the tension within the song shouldn’t be surprising as the song was originally written from the perspective of troops separated from their families by war — and considering that families are being uprooted from their homelands and separated from each other by seemingly unending conflict or from politics, Lightfoot’s understated rendition gives the song a subtly modern context, while sounding as though it could have been released in 1957.

Personally, I think what makes Lightfoot’s rendition one of the more compelling renditions I’ve heard in some time is that the Canadian singer/songwriter’s voice conveys a painfully lonely ache and longing — the sort of longing that comes from lengthy periods apart from loved ones and from home.