Jean-Pierre “Jupiter” Bokondji is a Kinshasa, Democratic Republic of the Congo-born and-based bandleader, songwriter and percussionist. Bokondji’s grandmother was a traditional healer, who got introduced him to music by having him attend religious ceremonies and funerals, which he later would play percussion. His father was a Congolese diplomat, who received a post at the Congolese embassy in East Berlin — and as a result, the family relocated to Germany.

While in Germany Bokondji started his first band Der Neger, an act that meshed the Mongo music of his native Congo with the European rock of his German-born bandmates. When his father’s post ended, the family returned to Kinshasa in the 1980s. Upon his family’s return, Bokondji traveled around the country listening to the music of the country’s different tribes, eventually developing and honing his own style and sound. In 1984, he formed a band called Bongofolk — and in 1990, he formed his best known and longest running band Okwess International, which currently features Staff Benda Bilili’s Montana (drums), Yendé (bass), Eric (guitar), Richard (guitar) and Blaise (vocals).

In the years immediately after their formation, the members of Jupiter & Okwess toured across Africa, playing a crowd-pleasing mix of Afropop, traditional Congolese rhythms, funk and rock paired with strong sociopolitical messages that Bokondji has dubbed “bofenia rock.” But unfortunately, as they saw increased popularity, a bloody civil war broke out in the Democratic Republic of the Congo. Some of the band’s members fled to Europe as a result of the war; however, Bokondji remained in Kinshasa. And as the war died down, the Congolese songwriter, bandleader and percussionist saw a resurgence of his popularity.

Bokondji was featured in the 2006 documentary film Jupiter’s Dance. The film brought him to the attention of British producers and musicians — and it lead to him joining the Africa Express tour and to major stops across the global festival circuit, including Glastonbury Festival and Way Out West. Adding to a rapidly growing international profile, the act released their long-awaited full-length debut, 2013’s Hotel Univers.

The Kinshasa-based act’s sophomore effort, 2018’s Kin Sonic finds the members of the band further expanding their sound outside of their homeland, incorporating elements of modern, contemporary music. As a result of the album’s popularity, Bokondji and company played 180 dates across the globe, including performing in the Paris production of Abderrahmane Sissako and Damon Albarn’s opera Le Vol du Boli.

Jupiter & Okwess’s latest EP Bolingo serves as follow-up to Kin Sonic while providing listeners a taste of what to expect for their forthcoming, third full-length album, slated for an April 2021 release. In the meantime, the Mario Caldato, Jr-recorded effort finds the Congolese act meshing a unique array of sounds across the African Diaspora from traditional African music, disco, jazz, New Orleans brass, samba and even soul while still remaining committed to sociopolitically conscious lyrics and a strong sense of purpose.

The EP’s latest single, EP title track “Bolingo” is a sonic departure from the bonefia rock they’ve established, with the band playing a shuffling and breezy samba featuring shimmering acoustic guitar, shuffling rhythms, soaring call and response vocals featuring Brazilian vocalist Rogê, and a gorgeous flute solo coda. Complete with infectious hooks, the song is centered around a simple yet very powerful message — love is our purpose. Material things don’t teach you anything about life; love does. And although, the Trump Administration’s miserable term is ending in a month, we all still feel like we’re in the end days — and we need to be reminded of the hope and power of love right now.

Since the release of Totobonalokua, the members of the trio have pursued a series of diverse solo projects, which kept them incredibly busy but throughout that period of time, each member of the trio would be regularly be asked by fans and the press when they would reunite to make a new album — or if they were plans to do so. Interestingly enough, although the trio’s paths seldom crossed, they managed to keep in touch, and as as the story goes, Gerald Toto eventually suggested that it might be time to get together and write new album. Of course, his collaborators and friends Bona and Kanza readily agreed. Understandably, it took some time to synchronize the schedules of three very busy people but eventually they found some time to write and record their forthcoming effort Bondeko, which derives its names from the Lingala word for “friendship” or “fraternity.”

Slated for a January 19, 2018 release through French record label Nø Førmat, Bondeko reportedly picks up where its predecessor left off but with the material managing the delicate balance of being nuanced and finely crafted, virtuosic yet spontaneous, playful yet profound — and they do so while retaining the gorgeous layered harmonizing and boundary blurring sound that won them international attention. In fact, Bondeko‘s first single “Ma Mama” finds the trio meshing the breeziness of Bossa nova with traditional African vocal chants in a way that will remind some listeners of Bobby McFerrin and of Crosby Stills and Nash; but perhaps more importantly, the trio manage to bridge the African Diaspora with a unique vision that’s both playful and compellingly profound. 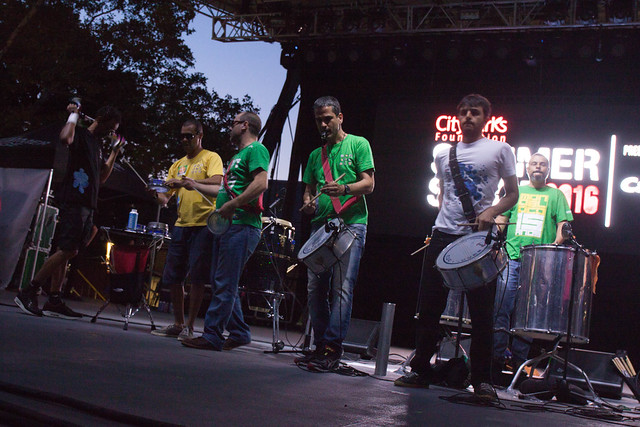 Classically trained Havana, Cuba-born and based jazz pianist and composer Harold Lopez-Nussa was born into a very musical family. Not only are his father and uncle are both working musicians, his late mother Mayra Torres was a highly-regarded piano teacher. When Lopez-Nussa turned eight, he began studying at Manuel Saumell Elementary School of Music, then the Amadeo Roldán Conservatory and finally graduating with a degree in classical piano from the Instituto Superior de Artes (ISA). “I studied classical music and that’s all I did until I was 18,” Lopez-Nussa said in press notes. Then came jazz.

“Jazz was scary. Improvisation was scary. That idea of not knowing what you are going to play . . “the Cuban pianist and composer explains. “At school I learned the works of Bach, Mozart and Beethoven and then it was all very clear. That permanent risk in which jazz musicians find themselves in all the time was terrifying—of course, now I find myself in that risk all the time.” And yet interestingly enough, throughout his recording career Lopez-Nussa has found himself moving between classical, jazz and pop music rather easily.  He has recorded a rendition of Heitor Villa-Lobos’ “Fourth Piano Concerto” with Cuba’s National Symphony Orchestra back in 2003; has won the First Prize and Audience Price of the Jazz Solo Piano Compeition at the Monterux Jazz Festival in 2005; has collaborated with David Sanchez, Christian Scott and Stefon Harris on Ninety Miles in 2011; has made an appearance on Esencial, an album of compositions by revered Cuban classical guitarist, composer and conductor Leo Brouwer, also in 2011; and as far as more popular projects, he was involved in the Cuba volume of Rhythms del Mundo, which had him recording songs with members of the world-famous Buena Vista Social Club; and he spent three years as part of the Omara Portuondo’s tuouring band — and naturally those experiences have deeply influenced the Cuban pianist and composer’s own personal style and aesthetic.

El Viaje, Lopez-Nussa’s latest full-length effort features the Cuban pianist and composer’s trio, which includes his younger brother Ruy Adrian Lopez-Nussa (drums and percussion) and Senegalese bassist and vocalist Alune Wade, as well as guest appearances from the Lopez-Nussas father Ruy Francisco on drums, Mayquel González on trumpet and flugelhorn, and Dreiser Durruthy and Adel González on percussion.  Alune Wade’s collaboration with Lopez-Nussa goes back to when the duo worked together on Havana-Paris-Dakar, and as Lopez-Nussa explains, “Having a non-Cuban musician on this recording speaks to our contact with other cultures. Especially with African culture, which is so far from ours geographically and yet so close. Every time we play, I believe we enter into a journey we are creating.”

Interestingly, the upcoming Stateside release of Lopez-Nussa’s latest effort comes as the US has begun to lift the embargo started during the Kennedy Administration and normalize diplomatic, cultural and trade relations — and in fact, it’ll be the first album by a Cuban-based artist to see a complete international release in more than 50 years. And as a teaser of what you should expect to hear off the album and the Cuban pianist and composer’s Stateside tour, you can check out two singles from the album “Mozambique en Mi B” and “Feria.” And from both tracks, Lopez-Nussa’s compositions possess an understated and elegant simplicity that makes both “Mozambique en Mi B” and “Feria” sound and feel timeless; in some way, they nod at bop era jazz — hinting at the charm and mischievous wit and stunning melodicism of Horace Silver and Thelonious Monk but meshing that with a breezy and danceable tropicalia and Afro-Cuban/Afro-Caribbean polyrhythms. And while mining from somewhat familiar territory, if you’ve listened to as much jazz as I have, the material possesses a vitality that separates it from countless others.  Check out how the interplay between Lopez-Nussa’s piano chords and Wade’s bass and vocals seem as though they’re flirtatiously dancing with each other on “Feria,” while “Mozambique en Mi B,” sounds as though it were heavily influenced by samba and includes a deft and gorgeous Lopez-Nussa solo — and it’s in those moments that the Havana-born and based pianist and composer reveals himself as arguably one of the more inventive, contemporary composers you’ll come across.

Bixiga, is a Central São Paulo neighborhood, known as a cultural melting pot of its Italian. African and Northeastern Brazilian population, and is arguably one of the city’s best areas to eat and catch some of […]