With the release of 2016’s debut effort Language, the Brooklyn-based indie rock quartet Hypoluxo, comprised of Samuel Jacob Cogen (vocals, guitar), Cameron Riordan (guitar), Eric Jaso (bass) and Marco Hector Ocampo (drums), have  received attention for a sound and songwriting approach that possesses elements of shoegaze, indie rock and dream pop — but with rapidly changing time signatures. Their sophomore album Running on a Fence is slated for a September 21, 2018 release through Broken Circles Records, and the album reportedly reveals a band that has expanded upon their sound while retaining the infectious hooks and shimmering yet anachronistic quality that has won them attention — and as you may recall, the album’s first single was The Smiths and The Psychedelic Furs like “Kentucky Smooth,” which possessed a wistful sense of regret at its core.

The album’s second and latest single “Huckleberry” continues in a similar vein as its predecessor as its centered around shimmering guitar chords and propulsive drumming; however, the band’s latest single manages to draw from classic 80s New Wave, complete with pop-leaning hooks — but while avoiding soulless mimicry; in fact, emotionally speaking, the song expresses frustration, uncertainty and regret simultaneously.

Running on a Fence, the Brooklyn-based indie rock act’s sophomore album is slated for a September 21, 2018 release through Broken Circles Records, and the album reportedly reveals a band that has expanded upon their sound while retaining the infectious hooks and shimmering yet anachronistic quality that has won them attention; in fact, the album’s first single “Kentucky Smooth” sounds as though it were inspired by The Smiths, The Psychedelic Furs and others, as the track is centered around shimmering guitar chords, a propulsive rhythm section, Cogen’s baritone crooning and a wistful sense of regret at its core. 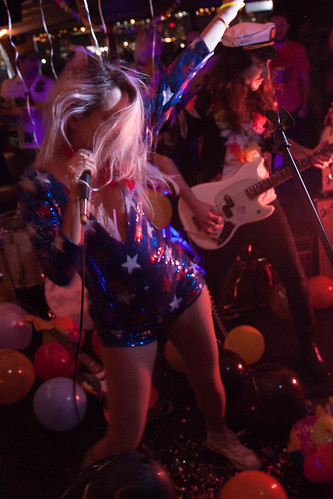 With the release of last year’s Language EP, Hypoluxo, a Brooklyn-based indie rock quartet currently comprised of Samuel Cogen, Marco Ocampo, Cameron Riordan, and Eric Jasso quickly received attention for crafting lush melodies with clever, somewhat cynical and perhaps at points coy humor; however, the band’s latest effort, Taste Buds finds the band stripping their sound down quite a bit, with the focus and guiding point being Cogen’s moody Matt Beringer-like baritone — and with their latest single “Nevada,” Cogen and company manage to sound as though they were slyly drawing from High Violet-era The National, complete with jangling guitars but while retaining the sly humor that first caught the attention of the blogosphere and elsewhere. And interestingly enough the song will further the band’s growing reputation for a sound and aesthetic that’s difficult to pinpoint, let alone pigeonhole as it’s not quite dream pop, nor is it twee and a bit too humorous to be typical indie rock while drawing from each one.