Springfield, MO-based Molly Healy is a singer/songwriter and multi-instrumentalist, who may arguably be best known for being a longtime fiddle player for the Ozark Mountain Daredevils. In 2015, Healy stepped out into the spotlight as a solo artist after the purchase of a looping pedal.

Healy’s solo debut, 2015’s Nightbirds saw her crafting material that blended her voice and strings together into atmospheric and experimental, orchestral folk. Since Nightbirds‘ release, Healy has released two more albums, 2017’s Human, and 2019’s Circles, which have revealed a restlessly experimental songwriter, expanding upon and refining her sound and approach.

The Springfield, MO-based artist’s recently released third album, Lotus may very well be her most ambitious effort to date. Influenced by an eclectic array of artists including Radiohead, Andrew Bird, Zoe Keating, and Rasputina, the album’s material pairs lush string arrangements with beats and electronic production. Some songs feature a full choir and/or orchestral arrangements — and Healy’s daughter joints in on electric guitar for a track.

Lotus‘ latest single “Us and Them” is one-part 70s orchestral disco, one-part orchestral chamber pop, one-part psych soul, centered around a dance floor friendly groove and Healy’s ethereal and sultry cooing. But like countless dance music-related songs before it, “Us and Them” is rooted in incisive political commentary, informed by our unusually heightened moment: in this case, the polarization of political ideas and the dangers it creates for all of us.

Brijean Murphy is an Los Angeles-born, Oakland-based percussionist, who has made a name for herself as a highly-sought after touring musician with stints in the touring bands of Toro Y Moi, U.S. Girls and Poolside, as well as several others — and as the story goes, Murphy can trace the origins of her musical career to her childhood. Murphy’s father, Patrick Murphy is a percussionist and engineer, who taught a young Brijean her first patterns on a pair of congas that she inherited from the late Trinidadian steel pan drum legend Vince Charles.

During a very busy tour schedule, the Los Angeles-born, Oakland-based percussionist managed to find some free time to collaborate with Doug Stuart, a producer, who shares a background as a jazz and pop sessions musician, who has worked with JOVM mainstays Bells Atlas, Meerna, Luke Temple, Jay Stone and others. Written and recorded in marathon sessions at their intimate home studio, wedged between rarely over-lapping tour schedules, the duo formed BRIJEAN, a project that meshes Murphy’s Latin jazz and soul upbringing with Murphy’s 70s disco and 90s house-inspired production.

Co-directed by Sarah Strunin and Brijean Murphy, the recently released video is a surrealistic fever dream that opens with an older gentleman using an elliptical machine in candlelit suburban-like living room — while watching a seemingly old TV show that features Murphy singing and swaying along to the song. A woman (presumably his wife or a relation) walks into the room, turn son the light and begins reading a book while drinking tea. The woman continues reading by the flickering light of the TV screen. A disco ball appears out of nowhere, which turns the room into an impromptu dance floor. It’s trippy, mischievous, downright bizarre and memorable.

Since their formation under the name Happy Meals in 2014 at Glasgow, Scotland’s The Green Door Studio, best known for being the birthplace of a number of local DIY bands, including renowned acts Golden Teacher and Total Leatherette, Free Love, comprised of Suzanne Rodden and Lewis Cook quickly established themselves as one of their homeland’s most acclaimed dance pop acts, as their 2015 full-length effort Apero was nominated for Scottish Album of the Year. Adding to a growing profile, the band opened for the likes of Liars and The Flaming Lips, and played sets at festivals in Austin, TX, Moscow, and Bangalore. Despite their recent change in name, the duo further cements their reputation for utopian and somewhat brainy dance pop experiments with their dance floor friendly. shimmering, 80s synth pop and New Wave-inspired single “Synchronicity.” While the track may remind some listeners of Nu Shooz’s “I Can’t Wait,” and New Order’s “Blue Monday” and “Bizarre Love Triangle,” the song is about breaking from the binds of culturally dictated self-limitation, coupled with the vertigo of complete freedom.

Shot by Harrison Reid and Omar Aborida and edited by Gary McQuiggan, the recently released video for “Synchronicity” was filmed at Carlton Studios and features friends of the band as four different “bands” with four different backdrops. But as the band’s Lewis Cook explains to The Quietus, “I wanted it to look like a Sparks video or something like that. I like videos where it’s just a band playing. But because the track is all electronic music, it’s just us with drum machines and synthesizers. So we thought it’d be cool to do this thing you used to see in the 90s where people had clearly made a track on a sampler.” As Suzi Rodden adds, “but they’re kidding on that they’re playing all these instruments in their video. Big bass guitars and full drum kits and maracas and stuff.” 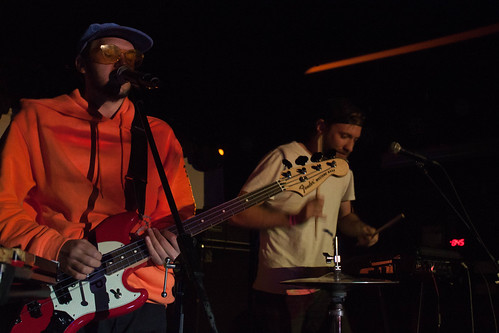 So if you’ve been frequenting JOVM over the past couple of months, you may recall a post on the Los Angeles-based indie pop duo  Papa. Comprised of of Darren Weiss (vocals and drums) and Danny Present (bass), […]

Comprised of Karolina Komstedt and Johan Angergård, the Ahus, Sweden-based electro pop duo Club 8 have a long-held reputation for being incredibly difficult to pigeonhole since their formation in 1995. Initially, the Swedish duo began as a Bossa Nova-inspired guitar pop act with the release of their debut effort, Nouvelle.  But with the 1998 release of their sophomore effort, The Friend I Once Had, the duo went through a complete and radical change of sonic direction, as that effort had the duo writing electro dance music. The duo’s next three albums, released between 2001 and 2003 had the duo switching things up with material that leaned towards indie soul.

Up until 2010, Angergård had served as produced — until the 2013 release of Above The City; however, Angergård takes up production duties on the duo’s soon-to-be released Pleasure slated for a November 20 release through Labrador Records. And as Komstedt explains in press notes, “Pleasure is an album about love, sex and jealousy. Musically, it is possibly our most focused release to date.” Interestingly, the album’s latest single “Late Night” is a swooningly wistful and melancholic song that looks at a love affair, viewing it as immediately exciting and passionate — that is until that initial excitement wanes and the bright colors of the relationship gently turn grey. At its very core, the song’s narrator clings to seemingly old-fashioned romantic dreams and notions, and their nostalgia, all while desperately wishing that feeling would come back. It seems to subtly suggest that while love is something that we all desperately desire, relationships with other people can be confusing and hellish — and yet, we want so badly that we’ll do anything for it.

Sonically, the song pairs wistful nostalgia with layers of glistening and undulating synths reminiscent of Stevie Nicks‘ “Stand Back,” and The Human League’s “Don’t You Want Me?” and Komstedt’s hushed coos to craft a song that’s a slickly produced pop confection — but from the viewpoint of someone who’s been in a number of love relationships and has seen them repeatedly fail and yet remarkably hasn’t had their hope beaten down.

Originally, known as the frontman of pop act Throw Me The Statue, Scott Reitherman’s solo recording project Pillar Point has received attention for a melancholy yet bouncy electro pop sound primarily comprised of vintage, analog synthesizers, drum kits and sleek bass lines. As the story goes, Reitherman was planning to write and record his sophomore full-length album in his Seattle home when he received an unexpected invitation to record the album at Kevin Barnes’ home studio, while Reitherman was opening for of Montreal during their US tour.

Once the tour wrapped up, Reitherman spent a few months crafting demos of the material that would wind up comprising Marble Mouth before spending a month at Barnes’ house refining and recording alongside of Washed Out‘s drummer, Cameron Gardener and Kishi Bashi‘s percussionist Philip Mayer.

Reithernan then spent a six period in New Orleans writing and refining both the album’s lyrics and vocals. And as Reitherman explained in press notes, “New Orleans was the most meditative and mysterious part of making the record. I wanted to sink into that city and scrutinize the romantic southern sojourn.”

Marble Mouth‘s first single, album opening track “Part Time Love” pairs layers of twitchy and cascading synths with propulsive, four-on-the-floor drumming and Reitherman’s ethereal cooing to craft a sound that’s reminiscent of The Talking Heads, Tobacco and others, while subtly nodding at Top 40 pop; in other words, the sound is tense, neurotic and incredibly danceable and accessible pop with infectious hooks.

Comprised of Darren Weiss (vocals and drums) and Danny Present (bass), the Los Angeles-based duo of Papa have been playing music in a variety of bands and projects since they were 11.  The duo have spent the past couple building up a national profile as they’ve toured the country’s major festival circuit, and have opened for the likes of Cold War Kids, Of Monsters and Men, Girls, Handsome Furs, and Florence and the Machine, among others and after an incredibly busy schedule, the duo went into the studio and began working on material that reportedly is a change in sonic direction that was largely influenced by the experiences they’ve had over that period , playing half-filled clubs to sold-out amphitheaters, self-releasing material and having major label support and back again.

Weiss and Presant’s latest single “Hold On” is the first original material they’ve released since the release of their 2013 full-length effort, Tender Madness and the single is a funky track with a propulsive rhythm, soaring hooks paired with urgently sung lyrics to craft a song that feels anthemic and club-ready while possessing a direct, intimate emotionality. It’s radio friendly pop that feels and sounds carefully and thoughtfully crafted while possessing an upbeat, swagger.