Over the past roughly two years, the rapidly rising Woodstock, NY-based garage punk act The Bobby Lees — Sam Quartin (vocals, guitar), Kendall Wind (bass), Nick Casa (lead guitar), and Macky Bowman (drums)  — have begun to receive attention for a feral and frenzied take on garage punk and an unpredictable live show. And as a result, the rising punk rock act has opened for the likes of The Black Lips, Murphy’s Law, Boss Hog, Future Islands, Daddy Long Legs, The Chats, and Shannon & The Clams.

Originally slated for a May 8, 2020 release through Alive Naturalsounds Records, The Bobby Lees’ Jon Spencer-produced full-length album Skin Suit has been pushed back to July 17, 2020 as a result of the COVID-19 pandemic — but what still remains is that the album finds the band crafting forceful and self-assured material centered around some of the most blistering and dexterous guitar work I’ve heard this year. So far, I’ve written about three of the album’s singles, the breakneck and explosive “GutterMilk,” a feral and unhinged cover of f Bo Diddley’s “I’m A Man,”‘ that nods a bit at George Thorogood‘s famous cover but with a defiant, gender-bending boldness and the sweaty, Jon Spencer Blues Explosion-like “Move.”

“Drive,” Skin Suit’s fourth and latest single continues a run of grungy and gritty garage punk centered around enormous power chords, mosh pit friendly hooks and a remarkably self-assured delivery. For such a young band, they seem poised to take over the world — with a youthful brashness and zero fucks given air.

The recently released video for “Drive” features the band performing the song in front of a divey tattoo parlor, and it should give the viewer a great sense of the band’s frenetic and unpredictable live energy.

“A couple of months ago we were heading down to Austin, TX for SXSW and playing shows along the way,” the members of The Bobby Lees explain in press notes. “By the time we got to Tulsa, Oklahoma our 9 SXSW shows had been cancelled because of the virus. So we made the best of our time in Tulsa and shot a video with our friends, while keeping a safe distance.”

The Brilliance is an orchestral pop duo comprised of lifelong friends, Marshfield, WI-born, New York-based David Gugnor (vocals, guitar) and Marshfield, WI-born, Chicago-based John Arndt (keys, vocals). While centered around the duo’s friendship, the act can trace its origins to when the then-Tulsa, OK-based Gungor and then-Austin-based Arndt started the band back in 2010. Since their formation, the duo’s music has evolved: they  stared with more liturgical art and moved to peacemaking protest music; but over the past handful of years have focused on music that inspires the listener toward empathy and kindness. (We need much more of that in our morally bankrupt world.)

The act’s more recent release The Dreamer Suite, a collection of songs in a series of “suites” — songs and pieces united by a central theme — found the duo teaming up with World Relief for the organization’s initiative to raise awareness of the plight of DACA dreamers has amassed millions of streams on Spotify and Apple Music — as an independent release.  Building upon a rapidly growing profile, the members of The Brilliance will be releasing The Dreamer Suite‘s highly anticipated follow-up, Suite No. 2 World Keeps Spinning: An Antidote to Modern Anxiety on January 10, 2020.

“How Do We Know,” the duo’s latest single off their soon-to-be released album is a sleek and slickly produced track featuring a song structure that alternates between shimmering and lilting verses and arena rock friendly choruses. And while bearing a bit of a resemblance to Death Cab for Cutie and U2, the song is emotionally centered around life’s biggest question — “why the fuck are we even here and what’s the point of all of this?” 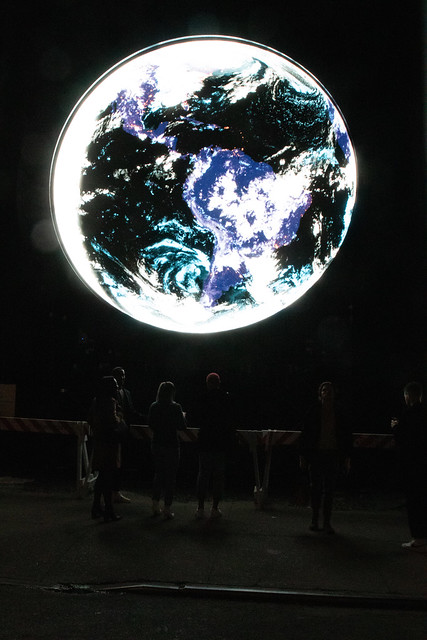 Amy Kuney is a Tulsa, OK-born, Los Angeles, CA-based singer/songwriter and multi-instrumentalist, best known as AMES. Kuney began piano lessons when she turned four, and participated in piano recitals and church performances throughout her childhood. The Tulsa-born, Los Angeles-based singer/songwriter and multi-instrumentalist wrote her first song when she turned 12 and by the following year, Kuney’s father moved the family from their Tulsa home to Honduras to live as missionaries after he saw a video highlighting the destruction of Hurricane Mitch. As a teenager, Kuney taught herself guitar chords off a poster her father bought from Wal-Mart, while grappling with being gay in a strange country — and without friends; however, Kuney spent her time listening to the only secular album she could get her hands on, Fiona Apple‘s Tidal and writing songs.

The Tulsa-born, Los Angeles-based singer/songwriter and multi-instrumentalist returned to the States to study at a religious college but she dropped out because of their archaic views on LGBTQ and relocated to Los Angeles, where she vowed to spend the rest of her life creating art and helping young people in the LGBQT community much like herself. Since relocating to Los Angeles, Kumey has developed a reputation as a go-to songwriter, who has written songs for the likes of Kelly Clarkson, AKON, Rita Ora, Michelle Branch, Tori Kelly, Lights, Icona Pop, Adam Lambert, Jason Mraz, Jojo, ALMA and growing list of others. Kuney steps out from behind the scenes with the release of the breezy “Hold On,” a single centered around shimmering and arpeggiated synths, strummed acoustic guitar, and a soaring and anthemic hook — and sonically speaking, the song manages to nod at Peter Gabriel, Kate Bush and Feist but with a much-needed message for anyone who has felt marginalized at any point.

Although they’ve had several different lineups over the course of their over 20 years of existence, the Tulsa, OK-based jazz act Jacob Fred Jazz Odyssey have been remarkably consistent, developing and firmly cementing a reputation […]