Currently comprised of founding members Michael Goodwin, a member of the OBN IIIs and eeetsFEATS; Chris “Anton” Stevenson, a member of Spray Paint, Dikes of Holland and When Dinosaurs Ruled the Earth; Marley Jones, a member of the OBN IIIs and Sweet Talk; and Victor Ziolkowski, a member of Skeleton and Nosferatu, the Austin, TX-based punk quartet PLAX can trace its origins to last year, when founding member Goodwin approached his longtime friend Stevenson and current OBN IIIs bandmate Jones about the possibility of forming an outsider punk band that would defy all conventional expectations while being inspired by the likes of Wire and Dawn of Humans. The band’s founding trio quickly went to work writing songs for a demo — they eventually wrote 9 — but they felt were still in need of a vocalist to complete the project. At the time Marley was collaborating with David and Victor Ziolkowksi, the founding members and frontman of Skeleton, a constantly evolving project featuring the Ziolkowski Brothers and a rotating cast of collaborators and friends. And as the story goes, Stevenson and Marley approached Victor Ziolkowski to contribute his vocals, and when he agreed, the project’s lineup was finalized.

By the end of last July, the newly formed quartet had played their first show with New Orleans punk act Patsy and they quickly followed that by playing with a number of national touring Texas-based bands including Crooked Bangs, Institute and Army and others — and building upon the buzz they were receiving, the band went on a January 2017 tour throughout Texas. And although Stevenson has recently relocated to Melbourne, Australia, the band has continued writing and recording; in fact, as you’ll hear on “Boring Story” the first single off the quartet’s forthcoming full-length debut Clean Feeling, the band specializes in the sort of scuzzy, garage punk that would be at home on Goner Records or on Castle Face Records, complete with slashing power chords and punchily delivered vocals. Arguably, “Boring Story” is one of the most mosh pit worthy songs I’ve listened to in several months — and it reminds me of the sort of music I’d hear in countless dive bars and dank DIY spaces.

Although very little is currently known about them, the London-based indie rock act Le Clientele, their latest single “Strats and Precisions” as the band describes is a “Dire Straits, Ariel Pink inspired workout” and was recorded in Softhouse Studios using a Studer A827 tape recorder, which helps to give the proceedings a jangling, old-timey feel but with a subtly contemporary take.

Comprised of Ellie English, Sade Sanchez and Irita Pai, Los Angeles, CA-based trio L.A. Witch have developed a reputation local for a garage rock-based sound that draws from the likes of The Pleasure Seekers, The Sonics, The Black Angels, The Brian Jonestown Massacre and others. “Drive Your Car,” off the trio’s “Drive Your Car” 7 inch single will further cement the their reputation in specializing in grungy, old-timey garage and psych  rock as layers of chugging and jangling guitar chords played through tons of reverb and delay pedal, paired with a propulsive rhythm and Sanchez’s sneering vocals in song that possess a murderous and malicious intent.

If you’re out in the West Coast or Southwest, you can catch L.A. Witch live. Check out tour dates below.

If you’ve been frequenting JOVM over the past month or two, you might remember a couple of posts on NYC-based indie rock quartet High Waisted — including some live photos from their early February stop at Baby’s All Right with NYC-based quintet Junk Boys and NYC-based duo Granny .

Fronted by Jessica Louise Dye, the quartet formed a couple of years ago and in a relatively short period of time, they developed a reputation locally for a sound that possesses elements of old school surf rock,  lo-fi garage rock and psych rock — and for their DIY concerts/booze cruises, tiki styled pig roasts and acid trip pizza parties. With the release of their Acid Tapes Vol. 2 mixtape, the quartet captured the attention of NME, who named them one of a “buzz band to watch.” High Waisted’s highly-anticipated full-length debut effort On Ludlow is slated for a March 4 release, and the album, which was produced by renowned producer Bryan Pugh will likely cement the quartet’s burgeoning reputation for scuzzy, party until you drop rock that also manages to reveal subtle shades of vulnerability beneath all the strutting, stomping and badassery much like the source material that has influenced their sound and aesthetic so much.

Earlier this year, I wrote about On Ludlow‘s latest single and video “Party In The Back.” Clock in at a little over 2 minutes, the song features Dye’s sweetly sung vocals paired with scuzzy, lo-fi surf rock chords, a propulsive rhythm section and a great guitar solo at the song’s bridge. And if wasn’t for the song’s modern lyrical and thematic concerns — essentially getting out on the town and tearing it the fuck up — the song may have been mistaken for being released in 1962. The album’s latest single “Door” continues the band’s reputation for an old-school inspired rock; however, “Door” sounds as though it could have been played at someone’s sock hop or prom back in 1955 or in a Quentin Tarantino film as Dye’s sweetly aching vocals are paired with shimmering guitar chords, steady bass playing and simple yet propulsive drumming — but with a subtly modern production sheen. With warmer than normal weather in the next few days around here, this song is a brief blast of summer, and of summer fun. 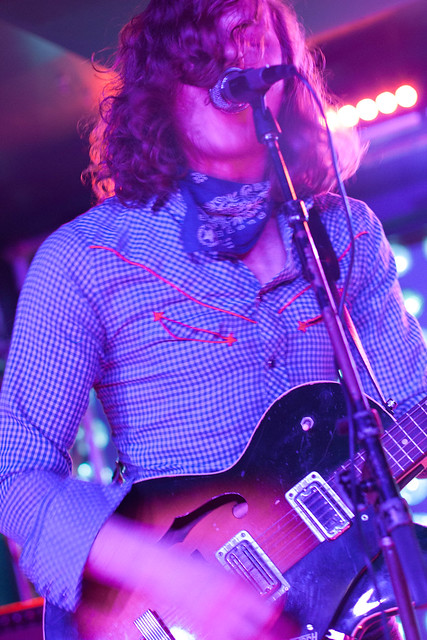 Currently comprised of Brigid Dawson (vocals and tambourine), Petey Damnit (a.k.a. Petey Damnit!) Mike Shoun (drums) and led by the band’s founder member and creative mastermind, John Dwyer (vocals and guitar),  San Francisco-based quarter Thee Oh Sees have developed a reputation both regionally and nationally for being incredibly prolific, as they’ve released over a dozen albums since their official formation back in 2004 — and for being relentlessly experimental, as each album they’ve released has been decidedly different, while remaining true to their garage rock/psych rock origins. And naturally, as result of their prolificacy, their reputation for sweaty, raucous, and punishing live set and their ability to craft mind-melting power chord-based rock, the Bay Area-based outfit has become a JOVM mainstay and blogosphere darlings.

2015 has been a big year for Dwyer and associates as they released the critically acclaimed Mutilator Defeated At Last, arguably one of the heaviest and hardest hitting efforts the band has released in recent memory. And they’ll close out the year playing a number of live shows — including a two night benefit concert for L.A. Kitchen, a Los Angeles-based charity, whose mission is to provide healthy meals to the area’s homeless and help unemployed and unskilled men and women for jobs and more. But they also will close out the year with the announcement of the release of the “Fortress”/”Man In A Suitcase” 7 inch, slated for a February 12 release through Dwyer’s renowned Castle Face Records.

The material for the new 7 inch is culled from the Mutilator Defeated sessions and acts as an addendum of sorts to the album, as well as a teaser for a full-length slated for release sometime in 2016. A Side single “Fortress” is probably the most prog rock-leaning song Dwyer and associates have released in some time, as the song consists of propulsive and forceful, motorik-like groove, a throbbing bass line, breakneck, mind-melting guitar chords and falsetto vocals — all of which give the song an anxious, buzzing and nightmarish feel that evokes the sensation of restless tossing and turning.

Originating as the solo recording project of David Miller, the Chicago, IL-based lo-fi/punk/psych rock quartet Strange Faces expanded to a quartet when Miller recruited Taylor Walters (guitar), Philip Valdez (bass) and Ben Leach (drums) to flesh out and complete the project’s sound. “Brand New Way,” off the quartet’s soon-to-be released debut effort Stonerism is a swaggering, scuzzy bit of psychedelic  lo-fi reminiscent of Crocodiles and Raccoon Fighter as the album’s first single pairs buzzing guitar chords, a tight and propulsive rhythm section, big hooks and vocals fed through layers of distortion. And despite it’s swaggering nature, at its core is a bruised and aching heart as the song’s narrator talks about moving on from crushing loneliness while capturing the youthful restlessness and rebellion that’s always been the rock ‘n’ roll spirit.