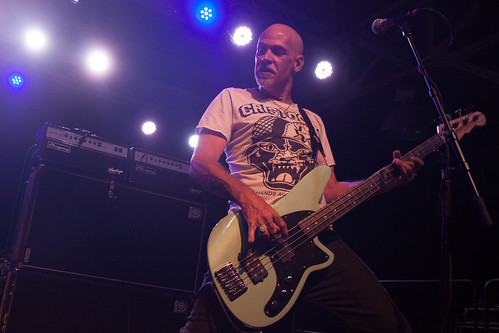 Formed in the early 90s and featuring Dermot Lambert (vocals, guitar), Robbie Sexton (keys), Brian McLoughlin (bass) and Barry Campbell (drums), Blink is a Dublin, Ireland-based rock quartet who have released three albums to date, 1994’s A Map of the Universe, 1998’s The End is Nigh and 2004’s Deep Inside the Sound of Sadness. And as the story goes with their inclusion on a New York-based trade festival CD in the early 90s, the Irish quartet quickly received international attention as EMI Records had signed the band for their 1994 debut; but before that the band had achieved quite a bit of attention back home in Ireland — their first two singles “Going to Nepal” and “Happy Day” reached the Irish Top 20, and their third single “It’s Not My Fault” debuted at number 8.
With the Irish quartet’s sophomore effort, the band broke through Stateside as The End Is Night was named Billboard‘s five-star album of the month and was named Billboard‘s album of the week before going on to quickly sell 90,000 copies, which allowed them to open for a number of well-known acts of the era including Mercury Rev, Moby, Lloyd Cole, The Cardigans, Mark Geary and Blink-182 (who ironically enough, the members of Blink sued for copyright infringement when Blink-182 was originally known as Blink; so talk about an awkward tour, huh?). And the band’s most recent album was nominated for Best Irish Album during 2005’s Meteor Music Awards.

It’s been a while since the band has released anything although the band’s frontman Dermot Lambert released a critically applauded solo effort back in 2013; however, March 3, 2017 will mark the re-issue of the band’s debut effort A Map of the Universe and the beginning of the a series of re-issues of their back catalog. And to mark the release, the band recently released “Happy Christmas 22 (I Still Miss You)” as a standalone single for the first time ever — although the single was released on A Map of the Universe. While being fitting for the season, the song is a rousingly anthemic track, which also appropriately sound of its era; in other words, it manages to be reminiscent of Brit Pop superstars RIDE, Oasis and others.

The legendary (and shamefully only two time Grammy-winning) LL Cool J will be releasing his 14th full length album, Authentic through 429 Records/The Savoy Music Group/Fontana North Distribution on April 30th. if you watched this year’s Grammies, […]