Over the past couple of years of this site’s nearly nine-year history, I’ve written quite a bit about Blonde Maze, the solo recording project of New York-based electronic music artist, producer and singer/songwriter Amanda Steckler. Now, as you may recall Steckler has received attention across the blogosphere for crafting slickly produced, atmospheric synth pop centered by lyrics that give her material an earnest and swooning romanticism.

Interestingly, over the past year or so, the JOVM mainstay has been collaborating with a number of both established and up-and-coming electronic music producers —  including the Iowa City, IA-born, Duluth, MN-based electronic music artist and producer Kyle Stern. best known as Attom.  As the story goes, Stern quietly sharpened and honed his production skills while earning a degree in Informatics from the University of Iowa. After relocating to Duluth, Stern won remix competitions for Parade of Lights‘ “Golden” and Chromeo’s “Jealous.” Building upon a growing reputation, Stern’s first single “Glow” was picked up on the MrSuicideSheep YouTube channel and officially released on the Big Beat Ignition Miami 2015 Playlist, which he promptly followed up with “Cruise,” a track that was released through MrSuicideSheep’s Seeking Blue Records. Adding to a growing profile, Stern won a remix contest for Odesza’s “White Lies,” which led to his first ever live set at Bonnaroo Music Festival. Since then, Stern has released “Her,” which amassed over 500,000 steams across each of the streaming platforms and “Stay,” which amassed 300,000 streams in under a month.

Interestingly, Steckler and Stern’s latest single, the euphoric “Anywhere”  is a seamless synthesis of the duo’s individual sounds and aesthetic as Steckler’s aching and ethereal vocals are paired with a slick production centered around arpeggiated keys, shimmering synths, tweeter and woofer rocking beats, chopped up vocal samples and a soaring hook. Unsurprisingly, the song continues a run of swooning singles by the JOVM mainstay that accurately evoke the feelings of being ridiculously, passionately in love with someone — something that even the most cynical of us have felt. As Steckler explains in an email about the song, “It encompasses the euphoric feeling of being in love and the willingness to go lengths for someone even when you are struggling yourself. It portrays dreamy, upbeat, yet longing vibes, something we’ve both felt a mix of in our lives and know people can relate.” 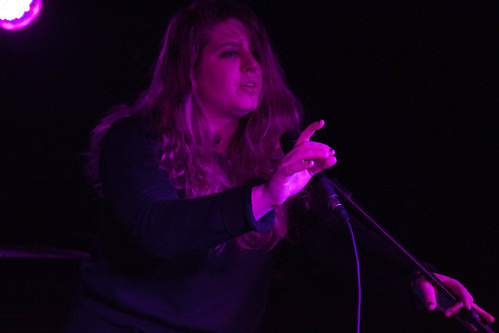 Now, if you’ve been frequenting this site over the past two years, you’ve likely come across a handful of posts on Blonde Maze, the solo recording project of New York-based electronic music artist, producer and singer/songwriter Amanda Steckler. And over that two year period, Steckler has seen a growing profile for crafting slickly produced and atmospheric synth pop — although over the course of her last few singles, including “Antarctica,” Steckler’s sound has increasingly been centered around twinkling piano, percussive and buoyant marimbas, layered vocals and propulsive, house music-like hooks.

It’s been a little over a year since the release of the aforementioned “Antarctica,” and although I haven’t written about new Blonde Maze material — until now, that is — Steckler been rather busy, writing and recording new material, much of which will appear on an EP slated for release in 2018. “Thunder,” the as of yet unnamed EP’s first single continues in a similar vein as its immediate predecessor but with a gauzier and much more wistful vibe over the passing of time. As Steckler explains in press notes, “To me ‘Thunder’ is about growing and changing with someone. You start to miss older times with them, but you also acknowledge that the growth has made them an inseparable part of your heart. Sometimes, with a relationship’s maturity, you lose your patience more, you let your guard down, and you get hurt, but the beauty of this maturity is that there becomes no one else in the world you are as comfortable growing with.”

Now, if you had been frequenting this site over the course of last year, you would have come across a couple of posts on Amanda Stickler, a New York-basd electronic music artist and producer, and her solo recording project Blonde Maze. And with the release of the aching  “Summer Rain,” off her debut EP Oceans and a slow-burning and melancholic cover of “Christmas (Baby, Please Come Home),” Steckler received attention here and across several other sites across the blogosphere for slickly produced yet atmospheric electro pop that possessed a plaintive ache and longing for someone dear being half a world away.

It’s been close to a year, since we’ve last heard from Steckler, and her latest single “Antarctica” features a slick, glittering and swooning house music-leaning production featuring layers of cascading and shimmering synths, marimbas, layers of cut and chopped vocal samples, stuttering and skittering drum programming and hand claps paired with Steckler’s breathy and tender cooing.  Interestingly, the song focuses on a profound emotional connection — but at its core is that weird dichotomy between the fear and sting of loss and the sense of dependence that comes up within every relationship, even the most functional ones. And it captures that with an emotional honesty and wisdom that belies the artist’s relatively young age.

Amanda Steckler is a New York-based electronic music artist and producer, who has received attention across the blogosphere over the past year for her solo recording project,  Blonde Maze. Interestingly enough, JOVM was among the very first to write about Steckler and Blonde Maze — and if you’ve been frequenting this site over that same period, you may recall that I wrote about “Summer Rain,” the first single off her debut EP, Oceans, which was released earlier this year. “Summer Rain,” much like the material off Oceans focuses on and is informed by the pain, excitement and longing that comes from being an ocean away from someone — or something dear to you. Written between stints in New York and London, Oceans‘ first single was comprised of layers of slowly cascading synths, a glitchy vocal sample, swirling electronics and an aching yet ethereal vocals that float over an icy and bracing mix. And in some way, that single evoked the sensation of being haunted by the presence of a loved one, who you can’t possibly have at that moment, because of a great distance.

Steckler’s latest single is slow-burning and atmospheric rendition of a familiar holiday song, “Christmas (Baby, Please Come Home)”that possesses a chilly and melancholic longing as slowly cascading synths, swimrling electronics  and chiming percussion and Steckler’s ethereal vocals — and much like “Summer Rain” and the Oceans EP, the single seems to evoke the idea that the love interest at the song is quite a distance away, and won’t come back any time soon.

Live Concert Photography: Blonde Maze Cameo Art Gallery August 21, 2015 Just a few weeks ago, I was rushing around a bit to make a quick stop at Citibank for some cash and catch a set […]

New York-based electronic music artist and producer Amanda Steckler writes, records and performs under the moniker of Blonde Maze, and her forthcoming debut EP, Oceans, primarily focuses on the pain, excitement and longing that comes with […]