Both as a solo artist, who released four highly acclaimed albums during his life — 2005’s Monkey Barz, 2007’s Jesus Price Supastar, 2012’s Songs in the Key of Price, and as member of Boot Camp Clik and of one half of hip-hop duo, Heltah Skeltah, and as a member of Random Axe with Guilty Simpson and Black Milk, Sean Price established himself as one of underground hip-hop’s most beloved and renowned emcees.  Since his death in 2015, there has been quite bit of material release posthumously, including Coalmine Records’ Record Store Day, Black Friday release, “Refrigerator P,” a collaborative effort between Philadelphia-based producer Small Professor and Sean Price that features Price’s Heltah Skeltah partner Rock. Of course, if you’ve been frequenting this site throughout it’s almost eight year history, you’d know that I prefer my hip hop to be rough, rugged and raw street shit — and this track is arguably one of the most rugged tracks I’ve heard this month, as Price spit bars full of references to the Super Bowl XX Champion Chicago Bears over an enormous and menacing production featuring a looped string sample and tweeter and woofer rocking beats. The hook features Price teaming up with his longtime Heltah Skeltah partner Rock while renowned turntabilist DJ Revolution scratches. Certainly, this track should stay as a reminder of Sean P’s incredible talent and how sorely its missed.

Up-and-coming Brooklyn-born emcee Frank B first emerged into the national scene with an appearance on Missy Elliott’s UPN series, The Road to Stardom with Missy Elliott , which resulted with him landing a record deal with Elliott’s imprint Gold Mine Records; however, the Brooklyn-based emcee is now doing things on his own with his own imprint Nobel House — and with his new imprint, the Brooklyn-based emcee hopes to enter 2018 in a big way with the release of his forthcoming album Let Me Be Frank, which will feature guest spots from Pro Era’s Nyck Caution, Onyx’s Sticky Fingaz, Heltah Skeltah and Boot Camp Clik’s Rock and a lengthy list of others.

Let Me Be Frank’s latest single, the GIT Beats-produced”Brooklyn Vs. All” finds the up-and-coming Brooklyn-born-and-based emcee teaming up with renowned, fellow Brooklynite, Rock. Now, if you’ve been frequenting this site over the course of its almost eight year history, you’d know that if I usually prefer my hip-hop to be rough, rugged and raw street shit — and “Brooklyn Vs. All” fits that mold, as the GIT Beats production consists of tweeter and woofer rocking beats and ominous instrumentation over which both emcees spit about their hometown with dexterous word play and complex rhyme schemes lovingly and realistically describing the starkness and beauty of their home borough.

Directed by Mike D. Visuals, the noir-ish visuals manage to emphasize the grittiness and desperation of the song — featuring footage shot in bleak back alleys, basements and industrial areas during dreary Northeastern fall days and nights. But it also nods to the fact that there really ain’t anyplace on Earth like Brooklyn.

Perhaps best known as one-half of Heltah Skeltah with the late Sean Price and a member of the  Boot Camp Clik, RockRock released his long-awaited solo debut last week Rockness AP, and from album single “Fax Machine.” a street banger which had the Brownsville native collaborate with M.O.P., Rock is set to step out on his own, as an emcee you need to pay attention to — if you like your hip hop, rough, rugged and raw. Unsurprisingly, album single “Wishin'” finds the Brownsville native collaborating with D12‘s Kuniva on a street banger in which the two emcees spit braggadocio-filled rhymes over a menacing production featuring a looped twinkling key sample, warm blasts of bluesy, psychedelic  guitar and tweeter and woofer rocking beats. Let this track be a reminder that you can still find real, rugged street shit — even if your multinational radio conglomerate won’t play it.

Maybe it has to do with coming off age in the 90s but I prefer my hip-hop rugged as hell, so when I saw an email that about Heltah Skeltah‘s and Boot Camp Clik‘s Rock teaming up with M.O.P., my first thought was “I need to check that out — immediately.” Interestingly, the three Brownsville natives have collaborated together in varying capacities throughout the years, and “Fax Machine” features the three imitable emcees spitting fire over a menacing and hard hitting Ford Tuff and Pascal Zumaque production that features enormous, tweeter and woofer rocking beats — the sort that you can hear rattling from about 3/4s of a block away.  And while Rock is preparing his long-awaited full-length debut Rockness A.P., which is slated for release on Friday, he manages to pay homage to his late Heltah Skeltah partner Sean Price — while making a braggadocio-filled Transformers reference to how he and M.O.P. are like “the cannon on Megatron’s arm/And that ain’t gon’ change ’cause MegaSean gone,” that should remind the listener and any other emcee out there, that although Sean Price is gone, Rock is ready to fuck shit up in his partner’s honor. 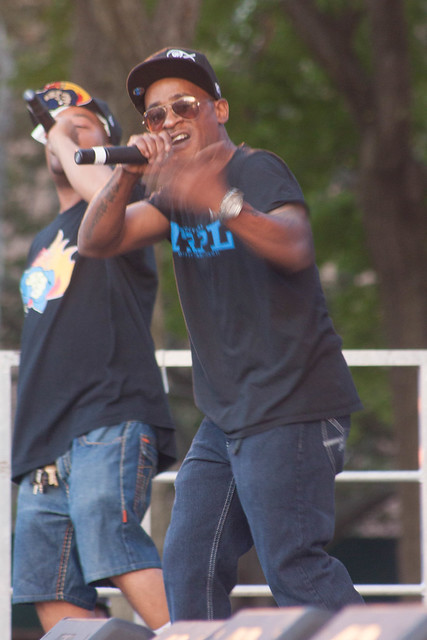 F.Y.I,’s musical career began in the middle part of this past decade as the co-founder of Los Angeles-based rap act Those Chosen, with whom he recorded over 100 songs, a number of mixtapes and a critically praised EP, 5IVE, which was produced by Grammy winner IZ Avila best known for his work with Usher, Janet Jackson, and Gwen Stefani. And with the release of his debut solo effort, Yo! The Places You’ll Go, which featured a collaboration with Rass Kass and Ab-Soul, the Los Angeles-based emcee’s album landed at #1 on WPTS, which won an MTVu Woodie Award for Best College Radio Station. And as a result of sharing stages with renowned artists including The Game, B.O.B., Big Sean, Curren$y, Slick Rick, De La Soul, Pac Div, Dead Prez, Little Brother, Black Milk, Pete Rock and CL Smooth and Boot Camp Clik and playing at music festivals such as CMJ, A3C and the Brooklyn Hip-Hop Festival, F.Y.I. has quietly developed a national reputation as an emcee to pay attention to.

The Los Angeles-based emcee’s debut sophomore effort, Age/Sex/Location was released earlier today and the EP’s latest single, EP opening track “One Thang” pairs F.Y.I.’s confident and dexterous flow, rhyming lyrics about looking bravely forward and striving and accomplishing your goals without fear and without doubt. And he does so over
over a glitchy and soulful production consisting of boom bap beats, distorted vocal samples, whirring electronics. It’s swaggering yet upbeat hip-hop which shows how influential Kanye West, Outkast and Common have been to contemporary hip-hop.

Buckshot of Black Moon, the Crooklyn Dodgers, the Boot Camp Clik and others was the headliner of the first (of what i hope will be an annual affair), Brooklyn Wildlife Summer Festival at the Paper Box in the Bushwick section of Brooklyn. The hip […]

Buckshot of Black Moon, the Crooklyn Dodgers, the Boot Camp Clik and others was the headliner of the first (of what i hope will be an annual affair), Brooklyn Wildlife Summer Festival at the Paper […]