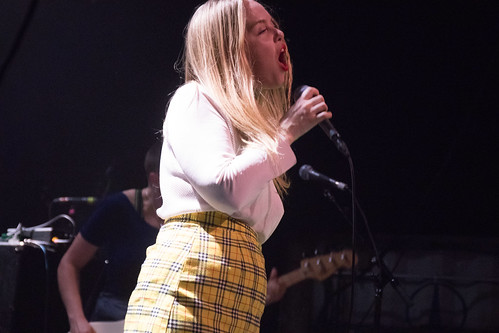 Deriving their name as a commentary on society’s objectification of women, the London-based punk rock trio Dream Wife, comprised of Icelandic-born, London-based Rakel Mjöll (vocals), Alice Go (guitar, vocals) and Bella Podapec (bass, vocals) met while the trio were attending art school in Brighton, UK — with Mjöll, Go and Podapec forming the band in 2015 as part of an art project conceptualized around the  idea of a band born out of one girl’s memories of growing up in Canada during the 1990s.  And since their formation, the trio quickly developed a national profile, as they’ve received critical praise for their earliest releases and their live shows from the likes of NPR, DIY, Stereogum, Nylon, Entertainment Weekly and others. Adding to a growing profile, the trio have toured across the European Union, opened for Sleigh Bells and The Kills during their respective US tours, and have played a number of the world’s biggest festivals, including SXSW.

Dream Wife’s highly anticipated self-titled debut is slated for a January 26, 2018 release through Lucky Number Music and from the album’s latest single “Hey! Heartbreaker,” the British based punk trio’s sound features stomp and shout in the mosh pit worthy hooks, fuzzy and angular guitar chords and a steady backbeat in a fashion that’s reminiscent of Is Is and Fever to Tell-era Yeah Yeah Yeahs and Elastica, complete with a brassy, kick ass and take names self-assuredness and bratty mischievousness at its core.

Animated by Joe Prytherch, a former art director of Boiler Room, best known as Mason London, the recently released video envisions a dystopian yet familiar future inspired by anime, Akira, Josie and the Pussycats and Jem, in which the members of the band are depicted as robot performers held in a sleazy bar against their will, where they perform in front of bored customers. But when we catch them in the world of the video, the trio violently escape and lead the police through a breakneck escape from the city.

As the members of the band said in press notes about the video and its concept, “We were super excited to work with Mason London to bring the world of ‘Hey! Heartbreaker’ to life. Collaboration is integral in our approach to Dream Wife, and we encourage different creative ideas and paths to mix with our own vision.

“It’s uncanny to watch these mechanical, parallel versions of ourselves rock out and then break out. We like to think that in another reality our robot versions are continuing their adventures; perhaps in the forest, perhaps plotting for a robot revolution, perhaps playing wild, secret rock shows to other robos.”