Ollie Trevers is an emerging London-based singer/songwriter and guitarist, who started writing and performing music when he was 14. Like countless other young people, Trevers harbored artistic aspirations from the very beginning.

While studying at Leeds College of Music, Trevers joined a band then known as The Doldrums — they’re now known as Velvit — as the band’s lead singer and rhythm guitarist. The band wound up playing gigs in and around the Leeds area but while earning a masters at ICMP, Trevers decided it was time to spent out into the limelight as a solo artist, writing and recording his solo debut, last year’s Saucy Naughty Rubbish EP, an effort that found the London-based singer/songwriter crafting a sound that drew equally from classic rock and post-punk.

Around the same time, Trevers started to receive film industry work, eventually writing period specific songs for the feature film Funny Cow and publishing music to be used in the feature film Burning Men. Since then he was commissioned to write the score and the soundtrack album for the upcoming feature film Cordelia. And after completing his masters, Trevers has begun to refocus his efforts into his solo career, including recruiting a backing band, which has started to play gigs in and around London.

The EP’s latest single is the oceanic “Can’t Make It Up.” Centered around fuzzy power chords, Trevers plaintive and expressive vocals and an enormous, arena rock friendly hook, the expansive song sonically nods at alt rock, the blues, psych rock, folk and Brit Pop in a way that reminds me of Love Is Here-era Starsailor and The Verve.  “‘Can’t Make It Up’ was written as a result of a  rather turbulent period in my life,” Trevers says in press notes. “I think a lot of people have expressed a similar despondency, and I’m really happy that I managed to find a way to share that in my music . . . especially as I sometimes find it too hard to write about things that are personal.”

Comprised of Armand Penicaut and Ulysee Cottin, the Paris, France-based pop act Papooz can trace their origins to when the duo met during part of boozy gatherings of literary obsessions — and as the story goes, the pair ditched their early and earnest ambitions to creative a political fane zone to play the music they had long been writing. Interestingly, the duo’s early demos were warped, boss nova-informed pop that also drew influence from The Beach Boys, Ella Fitzgerald, The White Stripes and Karen Dalton, among others.

The duo’s full-length debut, 2016’s Green Juice featured “Ann Wants To Dance,” whose SoKo-directed video has amassed more than 12 million streams online. Building upon a growing profile, the Parisian band’s Adrien Durand (of Bon Voyage Organisation) produced sophomore effort is slated for release later this year, the duo’s forthcoming sophomore album Night Sketches will further cement their reputation for crafting warped and skewed exotic-tinged pop — but with surrealist, character-driven lyricism. In fact, Night Sketches’ first single, the moody yet ethereal “You and I” is a lush amalgamation of 70s AM rock with 80s synth-based New Wave, as the song features an arrangement of shimmering synths, a sinuous bass line, glistening guitar lines, an ethereal falsetto and a soaring hook that sonically makes the song remind me of Roxy Music.

Directed by Armand Penicaut’s girlfriend, director and illustrator Victoria Lafaurie, the video was filmed at Le Balajo, one of Paris’ oldest cabaret clubs, currently owned by a renowned French wrestling family — and it stars Ulysee Cottin’s girlfriend, Danish-born actress and model, Klara Kristin. Shot with Super 16mm film, the video draws from old, Looney Tunes cartoons and other sources. As Lafaurie says in press notes, “Like Tex Avery’s animated cartoons, Ulysee and Armand are Klara Kristin’s conscience. Will she fall for the Devil or the Angel?” 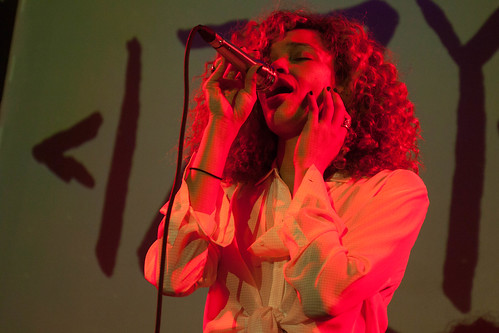 Betti is a mysterious, up-and-coming, Atlanta, GA-born and-based jazz/pop vocalist, who has started receiving attention for a sound and aesthetic that nods heavily at Billie Holiday, Amy Winehouse, Ella Fitzgerald, and burlesque; or in other words, for paring equal amounts of grit and grime with an old school elegance as you’ll hear on her debut single “Ordinary,” a single inspired by her own experience, with honest, messy and confusing, real-life love between equally messy, confusing real people. As the Atlanta-based artist explains in press notes “I think it’s important for people to know that the Hollywood impression of intimacy isn’t reality for every day life, especially when it comes to relationships. Every couple goes through ups and downs, and in that rollercoaster, we’re all the same, we’re ordinary.” And while clearly saying that within every relationship we bring our own dysfunctions, messy pasts, doubts, fears, heartaches and egos, and as a result, relationships can be simultaneously confusing, infuriating, joyous and hilarious, it also subtly suggests that in our relationships, we frequently find ourselves drawn to people and situations that we can’t explain.

The recently released music video is a slickly produced and edited –and dare I say, fitting? — take on burlesque and glamorous 40s Hollywood; but while emphasizing the dysfunction at the core of the song’s central relationship.

Neonbunny is a South Korean electro pop artist, who has started to receive international attention through the release of a couple of singles through Cascine Records‘ singles imprint CSCN. Her latest single, “Romance in Seoul,” […]

Born in Milwaukee, WI and currently located in Chicago, the 23 year old singer/songwriter Lili K. began performing in church and school choirs and started writing original material when she had turned 10. As a […]

Born in Vermont and now based in New York, singer/songwriter Hillary Capps comes from a very musical family as her father is part of a jazz ensemble that tours around New England and the Northeast. […]

Jazz is America’s first and greatest cultural and music contribution to the world. After all, there are few genres that have managed to convey the depths of human emotion and experience in the same fashion […]