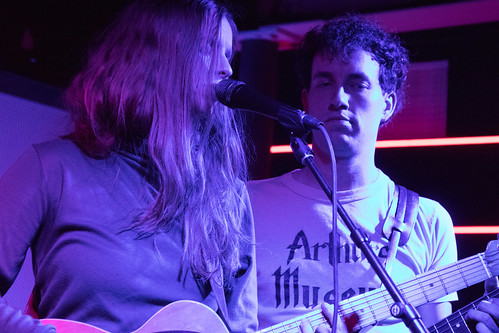 Faith Healer initially formed as the solo, recording project of its Edmonton-based creative mastermind, founding member, singer/songwriter and guitarist Jessica Jalbert, who started the project as a way to avoid being pigeonholed as just a singer/songwriter. However, the project has expanded into a full-fledged band with the addition of multi-instrumentalist Remmy Wilson, who joined the project before the recording sessions for the project’s sophomore effort — and first as a duo — Try 😉, which was recorded at Wilson’s personal studio in Montreal, during  a month-long session last September.

As Jalbert explains in press notes, the newly constituted duo’s newest effort is a departure both sonically and creatively for her. “The last album had a lot of flowery ’60s flourishes. This time, we wanted to simplify it and just do some straight-ahead songs. Focus on the song itself rather than all of the production.” And while the material may seem effortless, its creation was reportedly intensive, as the songs were meticulously crafted with deliberate effort but paired with plainspoken lyrics that reflected on self-empowerment, depression and appreciating all the good in life; in fact, the album’s title was deeply inspired by its creative process, and is a reminder that sometimes you need to be proactive and grab life by the horns rather than waiting for inspiration to strike.

“Light of Loving,” Try 😉‘s first single finds Jalbert and Wilson pairing a lush melody and an expansive 60s psych rock-inspired structure consisting of a trippy and unexpected key and tone changes paired with a soaring hook — and while revealing a relatively stripped down approach from the project’s preceding effort, the song reveals some ambitious, arena rock-leaning songwriting, as the band paradoxically possesses a towering sound full of some impressive, power chord-based guitar, fed through various pedals, blasts of organ and propulsive drumming. Interestingly, although the song is clearly nodding at 60s psych rock, there’s a subtle hint at much more contemporary fare — in particular, I think of The Mallard‘s Finding Meaning in Deference, The Fire Tapes‘ Phantoms and others.