With the release of their debut single “Zone,” the London-based act Two Tribes — Patrick Smith (Vox, guitars), Annalisa Iembo (Vox, synths and samples), Kim Engelhardt (bass) and Alastair Batchelor (drums, programming) — began to receive attention for an enormous and euphoric sound that has been compared to Primal Scream, Jagwar Ma, W.H. Lung and Snapped Ankles among others.

Clocking in at a smidge over seven minutes, the rapidly rising British act’s second and latest single, the Oli Bayston-produced, “Videodrone” is a mesmerizing club banger, centered around arpeggiated synths, tweeter and woofer rocking beats and an anthemic hook. And while recalling Evil Heat-era Primal Scream, Kasabian‘s self-titled album and Computer World and Tour de France-era Kraftwerk, the track as the band explains “deals with how the idea a digital identity, over-stimulation from technology and the internet can perpetuate disillusion and desensitisation in the real world. For some of us, the amount of information available can be a difficult thing to process sometimes, we wanted to explore in this song that increasingly blurred line between mind and mechanism. The title takes inspiration from David Cronenberg’s 1983 film Videodrome, which carries similar themes about the cult of technology.” 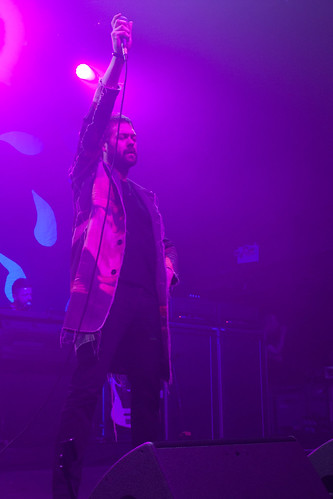 Currently comprised of founding members Tom Meighan (vocals), Sergio Pizzorno (guitar, vocals), and Chris Edwards (bass) with Ian Matthews (drums), the Leicester, UK-based indie rock/dance punk act Kasabian initially formed under the name Saracuse and  derive their name from Linda Kasabian, a member of the infamous Charles Manson cult. As the band’s Chris Edwards explained in an interview with Ukula, their former guitarist Chris Karloff had been reading up on Charles Manson, and the name Kasabian just stuck with him. “He thought the word was cool, it literally took about a minute after the rest of us head it . . . so it was decided.”  And although the band has gone through several lineup changes — at one point being a quintet before settling on its current lineup, the band can trace its origins to when its founding trio met while attending Countesthorpe Community College.
The founding trio along with a rotating cast of studio drummers recorded their Scott Gilbert-produced demo EP,  which was finished in December 1998 and featured three songs “What’s Going On,” “Life of Luxury” and “Shine On.” After making their first live appearance to celebrate Edwards’ 18th birthday, the band was signed to BMG by London-based DJ and producer Sam Young, who took over managerial duties for a period of time before both sides had a massive falling out. Since then the band has released six studio albums — 2004’s self-titled debut, 2006’s Empire, 2009’s Pauper Lunatic Asylum, 2011’s Velociraptor!, 2014’s 48:13 and For Crying Out Loud, which was released earlier this year — all of which have further cemented the Leicester-based act’s reputation for crafting a sound that’s been described as a mix between The Stone Roses, Primal Scream and Oasis and for a critically applauded live show. Along with that, the band has managed to be commercially successful in the UK as they received a Brit Award for Best British Group in 2010, won two Q Awards for Best Act in the World Today in 2010 and 2014, as well as one Best British Band at 2007’s NME Awards.

Produced by the band’s Sergio Pizzorno and recorded at his Leicester-based studio the Sergery, For Crying Out Loud has proven to be commercially successful, as it’s the band’s fifth #1 album on the UK Album Charts, thanks to the success of its first two singles “You’re In Love With A Psycho” and “Bless This Acid House,” both of which continue the band’s reputation for crafting swaggering, arena-friendly rock with shout worthy, crowd rousing hooks. Interestingly, album opening track and latest single “Ill Ray (The King)” is full of hip-hop inspired swaggering braggadocio paired with club-banging beats, buzzing guitars, rousing shout and stomp friendly hooks with a surprisingly disco/psychedelic house-inspired bridge — and as a result, it possesses a riotous “we’ll stomp the shit of you” vibe, reminiscent of Queen’s “We Will Rock You.”

The recently released video was written and conceived by the band’s Sergio Pizzorno and features three-time Emmy Award-nominated actor Lena Headley, who’s best known for playing Queen Cersei in Game of Thrones. The video follows Lena’s character as she meddles with the occult in a weird ploy to bring King Richard III, who was buried in Leicester, back from the dead. And in case you ever wondered what it might be like to drink way too much with a British royal, who has been dead for over 500 years, this video may be your primer.