Comprised of Marshall, MN-born, Minneapolis, MN-based singer/songwriter, electronic music producer and electronic music artist Sean Tillmann, best known for his solo recording project Har Mar Superstar and A Giant Dog‘s and Sweet Spirit‘s Houston, TX-born, Austin, TX-based frontperson Sabrina Ellis, Heart Bones is a new, collaborative project that can trace its origins to when Ellis and Tillmann meeting and becoming friends while touring back in 2016. They recognized a shared love of over-the-top showmanship, which made their collaboration seem inevitable.

Throughout last year, the members of Heart Bones have made alternating trips back and forth between Minneapolis and Austin to write original material. Interestingly, Ellis and Tillmann are inspired by many of the classic duos of the 60s including Nancy Sinatra and Lee Hazelwood, Serge Gainsbourg and Jane Brikin, Sonny and Cher, Sam and Dave and others — and s a result. the project draws from doo wop, electronic dance music, electro pop and pop. Their currently working on the finishing touches of their debut EP; but in the meantime, From Here to Eternity . . . And Back-era Giorgio Moroder-like “Little Dancer” is centered around layers of arpeggiated synths, tweeter and woofer rocking beats paired with Ellis and Tillmann’s ethereal boy-girl harmonizing. And while the song is club friendly, it possesses an achingly sad air.

Tillmann and Ellis will be embarking on a tour through June and July with Good Fuck. The tour includes a July 14, 2019 stop at Le Poisson Rouge. Check out, the rest of the tour dates below. 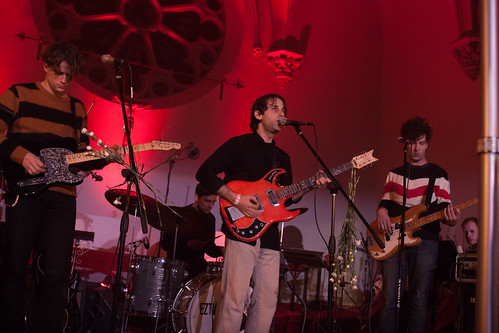 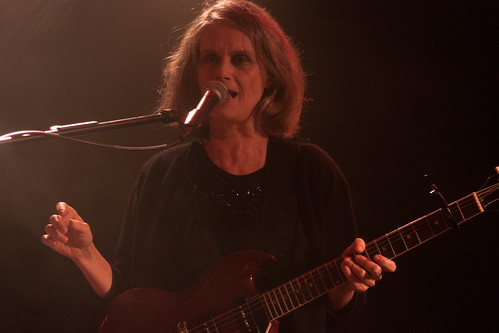 Juana Molina is a Buenos Aires-born and based singer/songwriter, producer and actress, who interestingly enough is the daughter of renowned tango vocalist Horacio Molina and actress Chunchuna Villafane. Unsurprisingly, the younger Molina grew up in an intensely musical home — her father taught her guitar when she was 5, and her mother introduced the renowned Argentine singer/songwriter, multi-instrumentalist, producer and actress to her music collection. As the result of 1976’s military coup, the Molina family fled their homeland and lived in exile in Paris for six years, and during that time, a teenaged Molina’s musical tastes were vastly expanded by regularly listening to a number of French radio stations, known for programs that spun music from all over the globe.

The Molinas returned to their homeland when Juana Molina was a 20-something, and as the story goes, she was determined to become independent and purse a career in music; however, like many young people, her initial career aspirations were to earn some decent money for a few hours of work, and having enough time to write songs, record and tour. Molina had long knew that she had a talent for imitations, and looking for a decent gig, she auditioned for a TV programs, and based on the strength of her impressions, she got hired on the spot. Molina quickly became one of Argentina’s most popular and beloved comedic actors, and three years after her first audition, she had her own show Juana y sus hermanas, in which she had invented and impersonated a serious of incredibly stereotypical characters; not only was the show wildly popular in her native Argentina, the show as syndicated to several Latin American countries.

Seven years after that initial audition, Molina was pregnant and her smash hit show was on hiatus while she was on maternity leave. With a lot of free time on her hands, she found herself reflecting on her rapid rise to stardom, and thought to herself “this isn’t what I wanted to do.” So with a highly popular show under her belt, Molina decided to quit acting to focus on her lifelong passion — music; a decision that many Argentinians held against her for years. In fact her full-length debut, 1996’s Rara was not only critically panned by critics, who resented her departure from TV. Worse yet, fans of her comedic acting would come to her shows, expecting to hear or see jokes but couldn’t quite understand her “folk singer character,” in which she kept singing and there were no obvious jokes. Dejected by the criticism, but desperate to continue what she felt was her life’s true calling, she relocated to Los Angeles for some time, where her music was better received, and began familiarizing herself with a variety of electronic instruments.

The Argentine singer/songwriter, multi-instrumentalist, producer and actress returned home to Buenos Aires, where she recorded her self-produced sophomore effort Segundo, an album which incorporated an increasing use of electronic instruments; in fact, since Segundo, Molina has developed a reputation for meshing organic arrangements with electronic production, usually through layered and sampled loops of acoustic sounds paired with beats and other electronics.  Interestingly 2000’s Segundo and 2004’s Tres Cosas received international attention — The New York Times named Tres Cosas one of their Top Ten Records that year, and she’s been championed by David Byrne, Will Oldham, and others. And while some critics have somewhat lazily compared Molina’s work to that of Bjork and others, her sound and aesthetic has been described by folktronica, ambient, experimental, neo-folk, chill-out, indietronica, psychedelic, indie pop and even progressive folk, and as a result, the Buenos Aires-born and -based artist has been uncompromisingly difficult to pigeonhole; in fact, Molina has arguably become one of her country’s most experimental artists.

Since 2013’s Wed 21, Molina has done quite a bit of international touring, playing shows across the European Union, Latin America, Southeast Asia and the US, and with the release of her seventh album Halo earlier this year, the Buenos Aires-based artist has been playing a series of international dates to support it, and she will be embarking on a short run of Stateside dates that will include two New York area dates — September 16, 2017 at El Museo Del Barrio and September 18, 2017 at Le Poisson Rouge. (The rest of the tour dates are below.) And unsurprisingly, Halo will further cement Molina’s reputation for being a restlessly experimental artist, and as you’ll hear on the album’s latest single “In The Lassa” the single — hell, the entire album — finds Molina pairing a hypotonic and dreamy production with a propulsive, tribal-like vibe, complete with shimmering loops of guitar and a motorik-like groove. And much like an incredibly lucid dream, the soundscape she creates seem to twist, turn and morph at will, while her ethereal and mysterious vocals float over the mix. But underneath the dreamy vibes, her lyrics touch upon witchcraft, premonition and dreams being used as metaphors for complex emotional states — with her sometimes doing something like scatting to emphasize something much more primal and timeless while mischievously nodding at Radiohead’s “15 Step.”

The recently released animated video for “In the Lassa” follows the surreal yet video game-like adventures of an anthropomorphic (and phallic appearing) bone, set free from its human in an incredibly verdant forest. I won’t give too much away but the video possesses a hallucinogenic and dream-like quality.

Jonathan Hoard is a Columbus, OH-born, New York-based singer/songwriter, vocal arranger and teacher, who has had a lengthy history performing and recording with a number of Grammy Award-winning artists and producers including Regina Belle, Tracy Pierce, Richard Smallwood, Rashad McPherson and DivinePURPOSE and his father, Stellar Award– nominated artist Ronald Hoard as a background vocalist. And with as the frontman of his own act, J. Hoard and The Greenhouse People, Hoard and company has opened for Dwele; however, I’m actually most familiar with Hoard through his work with Gentei Kaijo, the backing band to the popular soul/funk/hip-hop residency The Lesson.

Here’s where things get interesting. Earlier this month, I was at the Women In Music Holiday Party at Le Poisson Rouge when I ran into Melany Watson and a producer/songwriter and guitarist Greg Seltzer. And while chatting with Seltzer, he told me that he recently produced a song by J. Hoard featuring Rabbi Darkside. “Tidal Wave” pairs subtle soul clap-percussion and skittering drum programming with icily swirling synths, guitar chords played through reverb and twinkling keyboards with Hoard’s soulful falsetto which express ache, desire, and joy within a turn of a phrase. Rabbi Darkside contributes a silky smooth 16 bars at the song’s bridge about being in a seemingly turbulent situation and at the mercy at something far larger than yourself in a song that metaphorically views a tidal wave as both destructive and as a cleansing force — all while possessing a a quiet, understated self-determination.

Le Podium #1, La Femme’s debut EP landed landed on this site’s Honorary Mentions portion of the Best of 2011 List for their unique and breezily French take on surfer rock – after all, surfer rock is something that’s both […]