Last year, I wrote quite a bit about the British-born, New York-based singer/songwriter, musician and actress Lola Kirke. Although she may be best known for starring roles in  Noah Bambauch’s Mistress America and the Amazon series Mozart in the Jungle, and a supporting role in David Fincher’s Gone Girl, the British-born, New York-based singer/songwriter and actress is the daughter of drummer of drummer Simon Kirke, who was a member of the 70s hit-making rock bands Bad Company and Free and Lorraine Kirke, the owner of Geminola, a New York-based vintage boutique known for supplying outfits for Sex and the City.

As a solo artist, Kirke’s Wyndham Garnett-produced full-length debut, Heart Head West was released last year through Downtown Records, and  the album, which was tracked live to tape was a deeply personal effort that was as Kirke said in press notes “about basically everything I thought about in 2017 — time, loss, social injustice, sex, drinking, longing — essentially everything I’d talk about with a close friend for 40 minutes.”

Wyndham Garnett is a Los Angeles-based singer/songwriter, multi-instrumentalist and producer, who first made a name for himself as an original member of Elvis Perkins in Dearland and a touring member of Clap Your Hands Say Yeah. And as a result, he has shared stages with the likes of My Morning Jacket, Cold War Kids, Levon Helm, Pete Seeger, Dr. Dog, The Felice Brothers, Marco Benevento and a lengthy list others. 2016 saw the release of his self-produced full-length debut WYNDHAM and the Gus Seyffert-produced EP Double You, which featured lead single “Gypsy,” a track that landed on Elle’s “Best New Songs of December 2016” with singles by the legendary Neil Young and Childish Gambino. Now, as you may recall Garnett is a frequent collaborator with Kirke that has included her self-titled EP, last year’s Heart Head West and a pair of Christmas-themed songs.

Garnett and Kirke continue their ongoing and extraordinarily successful collaboration with two Valentine’s Day-themed singles “Lights On” and a cover of Ted Lucas’ “Baby Where You Are.” The Garnett and Kirke cover of Lucas’ “Baby Where You Are” is a fairly straightforward and atmospheric rendition of the song with a twangy 12 bar blues-like solo, the song is rooted in cold and lonely nights, longing for that special someone, who’s far away — although the song hints at the hope of being with that person again. “When we first got together, Wyndham and I rented a house in upstate New York and spent the majority of our time drinking too much wine and learning songs we liked on guitar so we could at least sing them at parties and maybe one day even record them,” Kirke says in press notes. “Ted Lucas’ ‘Baby Where You Are’ came into our lives then and has remained a staple because of how simply it expresses the truth of love and longing. I’m always excited by art that achieves that balance, which is why I fell so in love with Wyndham’s song ‘Lights On.’ I feel like the two songs express different sides of desire, one that is more certain and the other less, but both hopeful and both very known.” 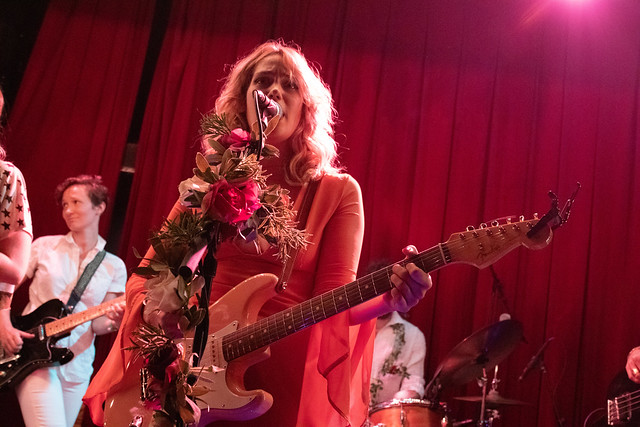 If you’ve been frequenting this site over the course of its seven year history, you’ve come across a number of posts featuring Daptone Records recording artists and JOVM mainstays Sharon Jones and the Dap Kings and Charles Bradley, and as you may recall, Sharon Jones died late last year after a three year battle with pancreatic cancer and Charles Bradley died earlier this year after a two-year battle with stomach cancer.

As it turns out, Jones and her Dap Kings spent the better part of her last few months writing and recording what is now known as the band’s final, full-length studio album, Soul of a Woman, which is slated to be posthumously released on November 17, 2017 through Daptone Records. Recorded on eight-track tape at Daptone Records’ Bushwick, Brooklyn-based House of Soul Studios, the album finds the band and their beloved leader pushing the limits of their songwriting and sound to create what some have said may arguably be some for he band’s rawest and most sophisticated material they’ve ever written.

Earlier this month, I wrote about Soul of a Woman’s first single “Matter of Time,” a lush and moody meditation and the nature of time that struck me as being inspired by Ecclesiastes and The Byrds’ legendary coverof Pete Seeger’s “Turn, Turn, Turn,” as Jones and company seem to suggest that with everything there’s a season and a purpose; that the pursuit of peace, justice, freedom and equality are frequently part of a necessary, lifelong struggle; and that one day, that struggle will result in a peace, brotherhood, sisterhood and understanding for all. But perhaps, because we now know that Jones died  as the band was finishing the material on the album, the song manages to also possess the profound and sad wisdom of the dying — that ultimately, all things are fleeting and impermanent.

The album’s second and latest single “Call on God” was originally written in the late 1970s for E.L. Fields’ Gospel Wonders, a choir she sang with throughout most of her life at the Universal Church of God, here in New York; but interestingly enough, Jones recorded with her Dap Kings during the 100 Days, 100 Nights sessions — and much like “Answer Me,” which made the album, Jones accompanied herself on piano with the band playing behind her, frequently providing specific instructions on how she wanted everything to sound. Though she always provided input on every song, Jones taking full charge was uncommon; however, the band found the experience to be so inspiring that they made a pact with Jones to record a gospel album with her taking the helm. As it turns out “Call on God” was set aside for that eventual gospel album but sadly, the song and the album was never completed.

On December 18, 2016, E.L. Fields’ window, Pastor Margot Fields presided over Sharon Jones’ memorial service in Brooklyn, which was attended by several of the original members of the Gospel Wonders, who had come in from different parts of the country to celebrate Jones and her life. Together again for the first time in many years, they performed a moving tribute to Sharon as part of the service. As the story goes, Bosco Mann and the Dap Kings invited the Gospel Wonders, all who were longtime friends of Sharon’s back to the Daptone Records’ House of Soul Studios to finish “Call on God” with them. And at the studio, the members of the choir put on headphones and heard Sharon Jones’ voice signing the song she wrote for them almost 40 years earlier. Interestingly enough, Jones always wanted to add background vocals to the song and everyone knew that she would have been thrilled to know that some of her oldest and dearest friends had stopped by to sing with her one last time.
As for the single, is a meditative and slow-burning song focusing on how faith can sustain you in the most desperate and uneasy times of your life — and although I’m an atheist, I can say that the God that Sharon Jones and Charles Bradley believed in, seems like the sort of God you’d want to worship and have in your corner.

Featuring footage by Matt Rogers with additional camera work by Jessica Glass, the recently released video is a revealing and intimate look into the studio with Sharon Jones    playing piano and earnestly singing the song as the Dap Kings play with her.

As it turns out, Jones and her Dap Kings spent the better part of her last few months writing and recording what would be the band’s final studio album Soul of a Woman, which is slated to be posthumously released on November 17, 2017 through Daptone Records. Recorded on eight-track tape at Daptone Records’ Bushwick, Brooklyn-based House of Soul Studios, the album finds the band and their beloved leader pushing the limits of their songwriting and sound to create what some have said may arguably be some for he band’s rawest and most sophisticated material to date.

Soul of a Woman’s first single “Matter of Time” is a lush and moody mediation on the nature of time that strikes me as being equally inspired by Ecclesiastes and The Byrds’ legendary cover of Pete Seeger’s “Turn, Turn, Turn,” as it seems to suggest that with everything there’s a purpose and a season, and that there will be a time for peace and understanding, but along with that, it brings up the idea that life, the pursuit of peace, justice, true freedom and fairness are the result of necessary struggle.  Perhaps because we now know that Jones died within a few short months of finishing the recording sessions, the song manages to possess the profoundly sad wisdom of the dying — that ultimately, most things in our lives are fleeting and impermanent. And in an age of superficiality, of dotards, madmen and fools, of hate and division, of growing strife and unease, of seemingly impending nuclear annihilation, we could use love and wisdom.

The recently released video filmed and edited by  Jeff Broadway and Cory Bailey captures Sharon, her Dap-Kings and Charles Bradley both performing and behind the scenes while touring Europe, and naturally it captures Daptone Records beloved duo in the very fullness of their lives while revealing why those who knew them and loved their music feel their losses so very deeply.

Released last year to little fanfare, the Wild‘s Dreams Are Maps managed to combine elements of the troubadour tradition – songs based around storytelling but delivers with the primal, defiant fury of punk rock. Clocking in at […]