Starting her lengthy career as a member of acclaimed breakbeat outfit The Bombazines, Porto, Portugal-born and based-vocalist and JOVM mainstay Marta Ren has kept herself very busy: after a two-record stint with The Bombazines, Ren contributed her vocals to a number of nationally known acts. Over the past couple of years, Ren, who has long been inspired by 60s funk and soul, has received national and international attention with The Groovelets, releasing 2016’s full-length debut Stop Look Listen to airplay from BBC Radio 6′s Craig Charles and Radio France‘s Francis Viel, as well as praise from this site and others.

As a result of a rapidly growing profile, Marta Ren and The Groovelets played sets across the European festival circuit, including stops at Trans Musicales Festival, Sziget Festival, Eurosonic Nooderslag and Mostly Jazz Funk and Soul Festival. But since then, Ren decided to go solo, further establishing what she has dubbed “Funk & Roll,” while uncompromisingly asserting her own destiny.

Last year, Ren collaborated with Matosinhos Jazz Orchestra on re-interpreted and re-worekd versions songs off her critically applauded debut with The Groovelets, the psych soul barnburner “Worth It” and beloved classics from the American Songbook. The collaboration was so fruitful that it continued with Ren performing with Matosinhos Jazz Orchestra at this year’s Avant Festival, which was aired nationally on Antena3/RTP in her native Portugal. That live set included Ren’s latest single “22:22.”

Centered around a propulsive groove, wah wah pedaled guitar, an enormous horn line and Ren’s self-assured, take-no-prisoners and take-no-bullshit delivery, “22;22” sounds as though it owes a sonic debt to James Brown — in particular The Payback-era James Brown. Thematically, the song finds Ren’s narrator referencing the continuous need to be honest struggling with the need to listen to herself while maneuvering the challenges and pitfalls of pleasing others, who may not be easily pleased.

Valance, France-based shoegazers Dead Horse One, currently comprised of founding trio Oliver Debard, Ludovik Naud and Antoine Pinet, with Maxime Garcia and Ivan Tzibousky can trace their origins back to their formation in 2011. While recording their full-length debut, 2014’s Without Love We Perish, the members of the French shoegazer act reached out to RIDE’S Mark Gardener, who wound up taking up production duties.

Following the release of their full-length debut, the band spent the next three years touring across the European Union, sharing stages with the likes of The Telescopes, The Wands and Sound Sweet Sound, and they made an appearance at Liverpool Psych Fest.

After a busy period of touring, the band went into the studio with Fleeting Joys’ John Loring, who produced the band’s sophomore album, 2017’s Season of Mist, which they supported with a tour that included a handful of opening dates with RIDE during the legendary shoegazer act’s European tour. And building upon the growing buzz surrounding the band, they shared the stage with The Brian Jonestown Massacre and the Philadelphia-based band NOTHING.

Since then, the band went back into the studio to work on their forthcoming third, full-length album The West Is The Best. Slated for a November 22, 2019 release through Requiem Pour Un Twister, the album finds the French shoegazers continuing their ongoing collaboration with John Loring — while marking a second time they’ve worked with Mark Gardener, who mixed the album. Thematically, the album as the band’s Oliver Debard explains is “a collection of thwarted love songs in the spirit of Sparklehorse and other such 90s bands.”

“Saudade,” The West Is The Best’s first single is a slow-burning track, centered around layers of shimmering guitars and plaintive boy-girl harmonizing, which gives the song an aching yearning — while nodding heavily at classic late 80s and early 90s shoegaze. “This song is a special song for us because it was written by Rorika Loring, her husband John and ourselves,” the band told Northern Transmissions. “Rorika and John play in Fleeting Joys, which is none less than one of the best shoegaze bands of the second wave, post 2000. From another point of view, the song joined the title of the album since it is a French, English collaboration by the presence of Mark Gardener at the mix table, and American, the Loring family is from Sacramento.”

Directed and edited by Pedro Wilde, the recently released video was filmed in a gorgeously cinematic black and white on location in the Portuguese cities of Porto, Gaia and Aveiro and stars Carolina Marques. Languidly shot, the video evokes the old-world and old-fashioned charm of Europe as Marques wanders around with a lute — but there’s also a desire to be contemporary without losing that sense of connectedness to one’s roots.

In her native Portugal, the Porto-born and-based vocalist Marta Ren has been a part of the country’s music scene since the mid 1990s and she may be best known for her stint as the frontwoman of the acclaimed breakbeat outfit The Bombazines with whom she recorded and released two full-length albums — and for contributing her vocals to a number of nationally known acts. Interestingly, Ren has long been inspired by the funk and soul sounds of the 60s and over the last few years, the Porto-born and-based vocalist decided it was time to step out into the spotlight with her own soul and funk project, under her name. She eventually hooked up with her backing band The Groovelets, with whom she released her critically praised, attention-grabbing debut Stop Look Listen, an effort that received airplay from BBC Radio 6′s Craig Charles and Radio France‘s Francis Viel.

Building upon a growing international profile, Ren and her Groovelets played across Europe to support her critically acclaimed debut effort, including the Trans Musicales Festival, Sziget Festival, Eurosonic Nooderslag and Mostly Jazz Funk and Soul Festival. Interestingly, the strutting, Emre Ramazanoglu-produced “Worth It,” is the first batch of material from the Portuguese soulstress in a couple of years — and reportedly, it’s the first taste from her highly-anticipated sophomore album, slated for an early 2020 release through Record Kicks. And while retaining elements of the classic 60s soul that first caught the attention of this site and elsewhere, Ren an The Groovelets’ latest single is a sultry, slow-burning and cinematic track that finds their sound nodding at psych-tinged soul that finds Ren taking names and kicking ass with stomping aplomb.

Directed by Pedro Coquenão and Vasco Mendes, the recently released video for “Worth It” is set in an empty yet gorgeous and opulent, old theater and focuses on a broken-hearted Ren, getting herself ready to perform. And at points, the video has Ren as a larger-than-life, force of nature. 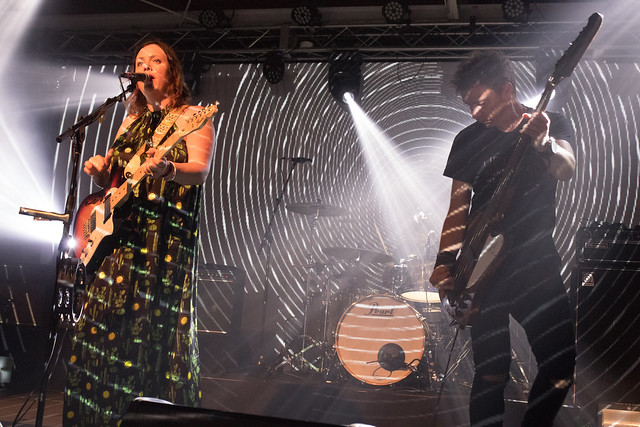 Perhaps best known for being the frontwoman of the renowned Portuguese breakbeat outfit The Bombazines with whom she recorded and released two full-length albums, as well as contributing her vocals to a number of nationally known acts across Portugal, the Porto, Portugal-born and based vocalist Marta Ren has been a part of her homeland’s music scene since the mid-1990s. However, Ren has long been inspired by the funk and soul sounds of the 60s and over the past couple of years, she decided that it was time for her to go solo and front her own soul and funk-based project under her own name, before eventually hooking up with her backing band The Groovelets.

Now, if you had been frequenting this site over the last few months of last year, you’d recall that Ren and the Groovelets’ debut effort Stop Look Listen was released to critical praise and received airplay from from BBC Radio 6′s Craig Charles, Radio France‘s Francis Viel. Adding to a growing international profile Acid Jazz Records‘ Eddie Piller has also championed Ren and her Groovelets. “So Long” Stop Look Listen’s barn-burning third single was a visceral bit of soul that balanced fury and sensuality with a decided late 60s/early 70s psychedelic feel — in some way nodding at Nancy Sinatra’s “These Boots Are Made For Walking” and James Bond soundtracks.

The Portuguese soul act recently recorded an acoustic rendition of the slow-burning and sensual album track “Smiling Faces” for French radio — and although the live, acoustic rendition leans slightly towards a hushed, jazz standard-like arrangement, the song which features a swaggering, Thelonious Monk-like bass line, some bluesy guitar playing, gentle drum tapping and some ethereal yet soaring organ while allowing room for Ren’s aching vocals, which simultaneously express the longing and profound loneliness of a deeply lovelorn narrator, who recognizes how difficult love can be, especially when they are incredibly unlucky in love — and others seem to constantly stumble upon it.

Arguably best known for fronting Portuguese breakbeat outfit The Bombazines with whom she recorded and released two full-length albums, Porto, Portugal-born and based vocalist Marta Ren has been a vital part of the Portuguese music scene since the mid-1990s as she’s also lent her vocals to a number of nationally known acts in her homeland and played at some of the country’s most renowned clubs and festivals. However, Ren has a long passion for the deep funk and soul of the 60s and she decided that it was time for her to go solo and front her own project under her own name, eventually hooking up with backing band The Groovelets.

Stop Look Listen’s third single “So Long” is a viscerally emotional, furious, sensual, barn-burning track in which Ren’s soulful and aching wailing with the tight and soulful Groovelets who emphasize the ache and fury in Ren’s vocals with warm, explosive blasts of horns, shimmering bluesy, guitar chords and a propulsive backbeat with a decided psychedelic-leaning. And much like fellow Record Kicks Records labelmates Hannah Williams and the Affirmations, Ren and her Groovelets are set to take over the world, as they pair a powerhouse vocalist with a backing band that can seriously compete with the world famous Dap Kings — while in the case of Marta Ren and the Groovelets’ “So Long” thematically and sonically nods at Nancy Sinatra’s “These Boots Are Made For Walking” and James Bond soundtracks.

Filmed and directed by Marco Olivera, the recently released music video manages heavily nod at Quentin Tarantino films as Ren is superimposed over black and white stock footage of cities and city traffic at night, 40s big bands and other footage, which further emphasizes the retro feel and sound.

Comprised of Andy Bell, Mark Gardener, Laurence “Loz” Colbert and Steve Queralt, the Oxford, UK-based quartet RIDE are considered by critics and fans to be among the originators of the shoegaze sound – despite the fact […]