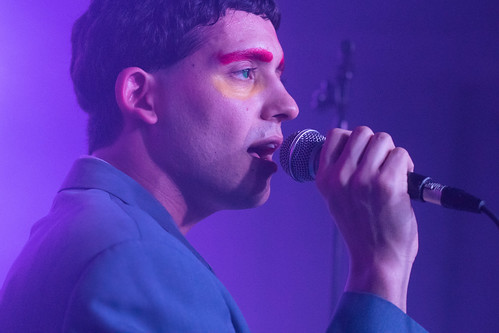 Over the past couple of years, I’ve written a bit about the Minneapolis, MN-born, New York-based trio Strange Names, and as you may recall the trio’s highly-anticipated effort Data is slated for release through Frenchkiss Records later this month. Now, while Data’s first single  “Into Me,” managed to further cement the New York-based trio’s reputation for crafting breezy, 80s inspired synth pop, “UFO,” the album’s second and latest single leans towards a funky, dance floor friendly direction with the song nodding at the likes of Nu Shooz’s “I Can’t Wait,” Cherelle’s “Saturday Love” and “I Didn’t Mean to Turn You On,” but with a post modern angst.

Directed and shot by the band’s friend Pedro Lopez and then edited by the members of the band, the recently released video for “UFO” as the band’s frontman Liam Benzvi explains in press notes was heavily inspired by the Bauhaus school while generally encapsulating the overall stylistic message of the record. “The video should make you seize a little, giggle, stew in confusion and hopefully move around. I envision it in the background of Elizabeth Hurley’s hell nightclub in the early 00s Bedazzled remake.” Interestingly enough, while the video manages to be wild, unsettling and confusing  there are several sequences that remind me of videos I’ve seen sometime in the 80s — but with a mischievous, we’re going to fuck with your head for a few minutes vibe.

Now, if you’ve been frequenting this site for some time, you may recall that last November, I wrote about the  Minneapolis, MN-born, New York-based trio Strange Names, whose highly-anticipated, sophomore, full-length effort Data is slated for a February 23, 2018 release through renowned, local indie label Frenchkiss Records. “Into Me,” the album’s first single managed to further cement their reputation for crafting breezy, 80s inspired synth pop — but underneath the song’s breezy nature is bratty yet flirtatious kiss off of sorts to someone, who the song’s narrator realizes is into him but for some perverse reason is busily pretending not to be. “UFO,” Data‘s second and latest single finds the duo still in the realms of 80s synth pop — but leaning more towards a funky, dance floor friendly angle, as though the duo were drawing from Nu Shooz’s “I Can’t Wait,” Cherelle’s “Saturday Love” and “I Didn’t Mean to Turn You On,” thanks in part to a incredibly sinuous bass line, some Nile Rodgers-like guitar, thumping beats, layers of arpeggiated synths and one of the sharpest pop hooks I’ve heard this year.