With the release of their earliest work — in particular, 2005’s Ruined EP and Violence Violence, 2008’s Still Nothing Move You, the band quickly developed a reputation for a relentlessly brutal and bruising hardcore punk sound compared to the likes of Infest and others. Building upon a growing profile, the Rohnert Park, CA-based punk act toured across the world with bands like Blacklisted, Converge, and AFI before releasing 2010’s Rohnert Park.

Shortly before they signed to Matador Records in 2011, the band went through a lineup change with the departure of Ryan Mattos. The following year saw the release of the band’s fourth album Zoo, an album that was a radical sonic departure from the band, as it saw them moving from the bruising hardcore sound of their earliest efforts towards a pre-hardcore, post-punk inspired sound much like Pink Flag-era Wire. 2015’s The L-Shaped Man found the band sonically moving further towards post-punk with a sound that was compared to the likes of Joy Division and others.

The band’s soon-to-be released sixth album In The Spirit World Now is slated for an August 23, 2019 release through Relapse Records and the album reportedly finds the band’s sound further pulling from the post punk influences that’s driven their last couple of albums — but there’s also a bit of a rock influence. And unsurprisingly, the band has managed to evolve their sound while remaining true to themselves as songwriters and artists.  Interestingly, the album’s latest single, the hook-driven “Presaging the End” is centered around shimmering and slashing guitars and a motorik-like groove, the song finds the acclaimed punk act sounding much more like The Fixx — in particular “The Sign of Fire” and “Red Skies” but while retaining a punk rock intensity and earnestness. 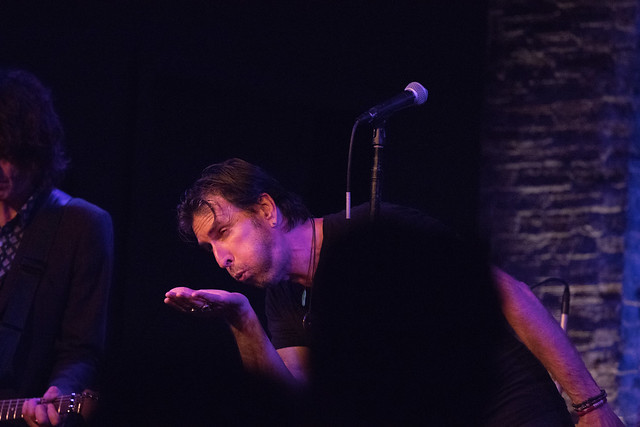 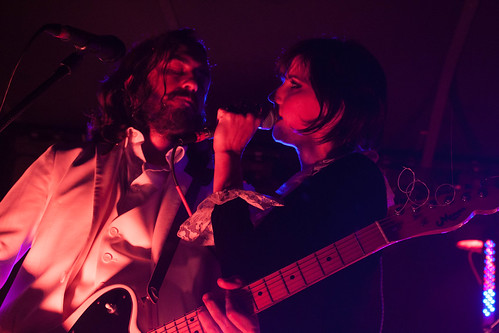 Although they officially formed in 2014 when their previous bands and creative projects ended, NGHTCRWRLS, comprised of Frank DeFranco (guitar, vocals), Brian Goglia (bass, vocals), Eric Goldberg (guitar, vocals) and Max Rauch (drums and vocals), the members of the band have known each other for years as each member of the band has spent time playing in a number of bands across the tri-state area. And as the story goes, once their various creative outlets ended, the quartet managed to serendipitously began collaborating through a series of jam sessions that resulted in their debut effort, which was recorded by Rauch in the band’s practice space and engineered and mastered by the band’s dear friend Jeremy Cimino . After a series of short tours to support their debut, the members of the band went back to their practice space to record the material, which comprised their soon-to-be released sophomore effort Raging Hot, which they had written while touring.

Raging Hot‘s latest single, the appropriately titled “Fear and Greed” is a funky, post-punk and 80s New Wave-leaning single, which finds the band pairing shimmering and angular guitar chords played through gentle amounts of reverb, a rolling and sinuous bass line, and propulsive drumming with DeFranco’s crooning falsetto. And while sonically being reminiscent of Wire and The Fixx, the song manages to possess a creeping sense of dread and uncertainty — the same sort of dread and uncertainty that countless people have started to feel about their prospects.

Comprised of Gold Coast Australia-born, Manchester, UK-based siblings Adam Lyons (vocals) and Nathan Lyons (keys), along with Patrick Huerto (guitar), Tommy Davis (bass), the now British-based band have developed a growing international profile for a hook-laden, 80s synth pop/New Wave-inspired sound, as you would hear on “Breathless,” a single that’s reminiscent of  The Fixx’s “Saved by Zero.” The sextet’s latest single “Relevance” will further cement the band’s reputation for pairing an incredibly anthemic hook with shimmering synths, a sinuous bass line, and Adam Lyons’ plaintive and earnest vocals — and much like “Breathless,” the single reveals a band that’s been writing some of the most self-assured and sexiest material of their careers to date — all while focusing thematically on a relationship that’s on uneasy footing and the uncertainty that it brings into one’s life while suggesting that sometimes one has to slow down and let things just happen at their own pace. And they do in a dance-floor friendly fashion.

The quartet’s highly-anticipated full-length debut Never Enough is slated for a September 30, 2016 through Cinematic Records and the album’s latest single “End of an Era” sounds as though it draws from radio-friendly, 80s New Wave — in particular, think of The Fixx’s “Saved by Zero,” “One Thing Leads to Another,” “Red Skies,” and “The Sign of Fire,” The Knack’s “My Sharona,” Huey Lewis and The News’ “The Heart of Rock ‘N’ Roll,” and others as the band pairs angular guitar chords, a driving bass line, four-on-on-the-floor-like drumming, atmospheric synths, punchily delivered lyrics and an anthemic hook. As the band’s John Eartherly mentions in press notes “We’ve been told that playing a rock ‘n’ roll band in 2016 is a ridiculous thing. For all of us though, it isn’t a question of wanting to do it or not. We have to do it. I left home and quit school at 16 to play music. Music is all we know and love, and this son his an ode to us following that path.”

As for the recently released video, the band’s John Eatherly mentions in press notes that “the label wanted David LaChappelle to do this one, especially ’cause it’s the pop sugar injection song, and they hope, a little pot of radio-friendly unit-shifting gold. But we said ‘nah, give us your money and we’ll do it it ourselves.’ So we took their money and bought a 1986 Dodge 600 and a mini DV Cam and did what we normally do — but for your voyeuristic pleasure.” While visually nodding at the sort of visuals Crocodiles would do, the video does capture some of the spirit and feel of videos released in the 80s.

Perhaps best known for his stint with long-time collaborator David Bazan in Pedro the Lion, TW Walsh emerged as a highly regarded singer/songwriter with the 2011 release of Songs of Pain and Leisure. And as Walsh explained in press notes, after the release of every album he’s worked on, he’s often thought about packing it in and doing something else — and with Songs he had felt as though he may have completed something.

At the beginning of 2013, Walsh came down with a mysterious and debilitating illness and over the next 18 months, the singer/songwriter struggled to function. “I didn’t have the energy to be creative . . . I could barely function at all. The only diagnosis I ever received was chronic fatigue syndrome. but I’m still not convinced that was correct. I’ll probably never know what was wrong with me. I’m still not nearly 100%. Eventually, I started to feel better, but then I fell off my bike and broke my elbow. This made it impossible to play guitar or drums for several months” Walsh adds in press notes.

Walsh eventually started to feel healthy enough to start messing around with song ideas. He recorded several demos but nothing sounded quite right to him — he wanted the arrangements to be weirder and more varied and didn’t know how exactly to do it. As the story goes, Walsh contacted Yuuki Matthews, known for his work with The Shins, David Bazan, Crystal Skulls and Teardrops in early 2014 to collaborate together. “This approach clicked” Walsh said “so over the course of exactly one year, we finished the ten songs that make up Fruitless Research. In a few cases, Yuuki reworked the songs from the ground up — keeping only the vocal and some drum elements, and building a new chord progression around the melody. In other cases, he added overdubs and did some creative editing. But in every instance, his vision pushed the song over the edge into something exciting . . . something that I wouldn’t have done on my own. His mixes also blew me away. They’re pretty unconventional at times in their saturation and character. It kind of sounds like a tape from the 80’s you left in the car too long.”

Walsh adds, “Lyrically, this record documents a time of upheaval, discovery and change for me. I turned 40 right in the middle of it. I’ve been working through a lot of existential stuff. At some point, you gotta take a hard look at reality. Try to figure out what your life means.”

“Young Rebels,” the first single off Fruitless Research consists of twisting and turning synth chords, buzzing guitar, throbbing bass and thundering drums paired with an incredibly anthemic hook, and in some way it makes the song sound as though it were recorded in 1983 — think of The Fixx‘s “Red Skies” — but on old, warped analog tape that’s sat around in a dusty room.

Last night, I learned that JOVM has had readers and viewers from over 117 countries across the world — this year. 117! I’m honored, flattered and  incredibly humbled that my childhood obsession with music and my labor of love have become a part of so many people’s lives. With 2015 coming to a close, I want to thank you, dear friends for letting me come into your screen and hopefully bring a little bit of joy, wonder and meaning into your lives. And if I’ve done that, I’ve been wildly successful in ways that I never would have dreamt.