2017 found El-Sergany collaborating with Josh Medina for the ambient album Serious Dreams, an effort that was released to critical applause from the likes of The Quietus, Bandcamp, The Stranger, Seattle Weekly and Tiny Mixtapes. The following year, the project expanded to a full band with the addition of MX-80 Sound’s Nico Sophiea aend Red Ribbon‘s Emma Danner (bass) for that year’s Alt, an effort that Aquarium Drunkard compared to “an imaginary collaboration between Grouper and Spiritualized.” Interestingly, the band started off this year with a collaborative split tape with fellow Seattle-based act Supercandy, some candy that featured contributions from Brenan Chambers, Lori Goldston, Monika Khott and Ambrosia Bardos, who added layers of guitar effects, cello, vocals and trumpet.

The band has built up a strong profile in their hometown, opening for the likes of Circuit Des Yeux, Carla dal Forno, A Place to Bury Strangers and The Cave Singers — and they’ve toured the West Coast. Building upon a growing profile, the band will be releasing their self-titled full-length debut through Drawing Room Records. Slated for a September 20, 2019 release, the Seattle-based sheogazers self-title full-length finds the band exploring a wide range of styles from intensifying meditative drones to songs, where the same moment never quite happens twice. And unlike their previously released material, the vocals and lyrics are much more focused — with the material thematically longing for and seeking knowledge of the self, to guide the way out of one’s own mind.
Clocking in a little over five minutes, “High Rise,” the latest single off the Seattle-based shoegazers forthcoming full-length, self-titled  album is an expansive and shapeshifting song that begins with a pensive and slow-burning, shimmering intro that slowly builds up into an explosive power chord and motorik groove driven middle section. The song then closes out with a pensive and slow-burning, shimmering coda to close off a mind-bending and expansive song that sounds like the perfect accompaniment to experimenting with hallucinogens.

Istanbul, Turkey-based synth-wave duo Jakuzi, which is comprised of Kutay Soyocak and Taner Yücel can trace its origins to when Soyocak and Yücel started the act in 2015 as a way for them to move away from their previous punk rock-leaning projects. When they released their debut cassette in 2016 Fantezi Muzik  no one seriously expected it to leave their immediate circle of friends and associates; however, the tape caught the attention of City Slang Records, who re-released the debut with new tracks the following year — and the album began to receive praise from internationally recognized media outlets, including The Quietus and The Guardian, and the band played sold-out shows with their musical idol John Maus.

Fantezi Muzik’s material found the band going against the grain of what’s  expected from a male-fronted Turkish act. While most male-fronted acts from the duo’s homeland aren’t typically known for being introspective, Soyocak and Yücel’s work, which has been centered by a gothic sensibility, addressed the personal and psychological issues they were facing.

Ironically, despite achieving the sort of success that most indie bands would probably kill for, the duo found themselves dealing with a number of challenging issues. Being musicians in their homeland is extremely challenging economically and personally  — and because their songs are written and sung entirely in their native Turkish, the language that Soyocak feels he can best express himself, the opportunities are limited. Currently, there aren’t playlists for Turkish DYI dream pop/dark wave/synth wave acts, their songs aren’t played on traditional radio shows and there isn’t a mass market for attending punk rock shows.  And although they’ve been frustrated and even demoralized, they have refused to give in; in fact, their long-awaited and forthcoming sophomore album Hata Payi (which literally translates as “part of the mistake”) reportedly finds the band delving deeper and making further explorations into the feelings and thoughts they touched upon in their debut — namely, what it’s like to be a young adult in Istanbul, having success and then having to live up to expectations, being an artist in a country that doesn’t quite get or support your work, managing personal relationships as you get older and mental health; but with a refined, darker sound. “I think my melancholy comes partly from where I live,” the band’s Kutay Soyocak says in press notes. “This can be seen in the lyrics. I sometimes feel dark, lost and lonely as everyone. Here, the economy and politics make me feel hopeless sometimes. The future seems blurry but we try to keep our hopes high and continuing what we do. The audience is getting bigger every day and they support us and it is just pure love in our gigs.’’

Interestingly, “Toz,” the second and latest single off Hata Payi immediately brings Joy Division to mind, as the song is centered around shimmering and arpeggiated synths, stuttering beats, an angular and propulsive bass line, a big hook and Kutay Soyocak’s sonorous yet achingly sad baritone — and although the lyrics are completely in his native Turkish, the song evokes a loneliness that is deeply universal.

Directed by Eli Kasavi, the recently released video for “Toz” stars a brooding and lonely Kutay Soyocak dancing alone in a room with flickering spotlight. As Kasavi explains in press notes. “It’s connected to the band’s previous video “Şüphe” where the main character watched a dancing couple with a feeling of doubt. That character has left that place now and is dancing by himself.”

Black Bear Whisper is the collaborative dark, electro pop project of Danish singer/songwriter and producer Kat Boelskov, who has released music that has been largely ignored in her homeland but has found some popularity among the Mexican gay community; and the London-born Iranian producer Unfamed, who has collaborated in a number of projects, including this one, which has already seen praise from Allmusic, Uncut and The Quietus among others — also, Unfamed also spent 18 years studying the Iranian santur, a 72 stringed dulcimer, played with small wooden hammers, developing a reputation for being one of the best santur-players outside of Iran.

Interestingly, the duo have never met in person but they can trace the origins of their long-distance collaboration to a chance meeting on the Internet. Although their collaboration is currently based primarily in email and music files, the duo quickly realized that the material they had begun working on centered around extremely dark themes with lyrics that specifically focused on anger, euphoria, jealousy, deception, desire and other forbidden emotions and thoughts. Sonically speaking, the duo’s work is defiantly difficult to categorize as it pairs modern electronic production with santur, adding an ancient vibe to the proceedings.

The duo’s latest single, the Garbage meets glittering disco-like “1000 Eyes” features a funky disco-inspired bass line, four-on-the-floor drumming, shimmering and arpeggiated synths, blasts of shimmering santur chords — and while dance floor friendly, the song thematically focuses on selfishness, self-obsession, blind, spiteful rage at everything and everyone. As the duo’s Kat Boelskov says in press notes, “I’m self-obsessed, and I’m angry. All I ever see is me, and no-one else ever meets my expectations. Every good act I do is for myself only. If I’m nice to you, it’s only another tactic, another play. I try above all else to be in control, to not give you a chance to gain equality. When I fear that you may be my equal, I desperately try to hold you down, by whatever means.” Of course, what makes the song so disturbing is that it’s rooted in a profound and deeply cynical truth about human nature — people can be selfish, delusional, greedy, stupid assholes. We see it every single day in the Trump Administration and elsewhere.

Since their formation under the name Happy Meals in 2014 at Glasgow, Scotland’s The Green Door Studio, best known for being the birthplace of a number of local DIY bands, including renowned acts Golden Teacher and Total Leatherette, Free Love, comprised of Suzanne Rodden and Lewis Cook quickly established themselves as one of their homeland’s most acclaimed dance pop acts, as their 2015 full-length effort Apero was nominated for Scottish Album of the Year. Adding to a growing profile, the band opened for the likes of Liars and The Flaming Lips, and played sets at festivals in Austin, TX, Moscow, and Bangalore. Despite their recent change in name, the duo further cements their reputation for utopian and somewhat brainy dance pop experiments with their dance floor friendly. shimmering, 80s synth pop and New Wave-inspired single “Synchronicity.” While the track may remind some listeners of Nu Shooz’s “I Can’t Wait,” and New Order’s “Blue Monday” and “Bizarre Love Triangle,” the song is about breaking from the binds of culturally dictated self-limitation, coupled with the vertigo of complete freedom.

Shot by Harrison Reid and Omar Aborida and edited by Gary McQuiggan, the recently released video for “Synchronicity” was filmed at Carlton Studios and features friends of the band as four different “bands” with four different backdrops. But as the band’s Lewis Cook explains to The Quietus, “I wanted it to look like a Sparks video or something like that. I like videos where it’s just a band playing. But because the track is all electronic music, it’s just us with drum machines and synthesizers. So we thought it’d be cool to do this thing you used to see in the 90s where people had clearly made a track on a sampler.” As Suzi Rodden adds, “but they’re kidding on that they’re playing all these instruments in their video. Big bass guitars and full drum kits and maracas and stuff.” 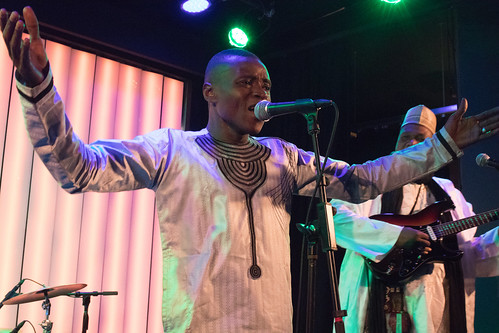 The band’s 2013 debut effort was released through FatCat Records to critical acclaim from the likes of The New York Times, The Guardian, The Independent, Mojo, Vice and The Wire, with frenetic live sessions on NPR, KEXP and WBEZ. Building upon a growing international profile, the band received praise from the likes of Pitchfork, Afropop Worldwide, The Fader, The Quietus, The Boston Globe and NPR.

Released last Friday, Tantabara, Tal National’s third album continues their ongoing collaboration with Chicago, IL-based engineer Jamie Carter on production and engineering duties, and the album which was recorded in the collective’s hometown of Niamey, Niger. Unsurprisingly, the album find the collective furthering their expressed mission of making a global audience dance to their hypnotic grooves, all while focusing on capturing the energy and vibe of their live sound to tape. Much like their counterparts, the collective have managed to create a huge sound of extremely limited resources, which frequently means that the members of the collective record in a remote, recording rid in a dusty, makeshift studio, working with minimal recording equipment and instruments on the verge of disrepair. Interestingly, the collective credits their songwriting and recording process to adding to their overall communal spirit, with opening their home up as a studio as a way for everyone within the group to be involved; in fact, Tantabara’s 8 tracks features 8 different vocalists — 7 of whom are full-time members.

Additionally, the album finds the collective looking back on a busy and influential period of time spent honing their live and recorded sound drawing from a number of Stateside tours, live sets at WOMAD Festival and Roskilde Festival and their legendary 5 hour plus live shows at their Niamey nightclub.

Tantabara’s latest single “Akokas,” much like the bulk of their work is centered around a tight danceable yet trance-like groove, some blistering and virtuoso guitar work and complex polyrhythm but at its core is much-needed celebration of diversity, acceptance and tolerance — and along with that, two larger, universal messages: that music is a powerful, unifying force and that there’s love, freedom, acceptance on the dance floor, if you let go of your preconceived notions and let the moment.

The recently released video for “Akokas” features wild and psychedelic visuals of the band’s members performing the song, capturing the band’s ebullient and euphoric spirit and the song’s trippy grooves.