Bruno Bisaro is a Paris-based singer/songwriter, poet, actor, playwright and multi-disciplinary artist, who has been deeply involved in France’s avant-garde theater, writing and music scenes over the past decade or so:

He received theater training at Blanche Salant’s and Paul Weaver’s International Theater Workshop.
Poet and friend Geneviève Pastre helped him publish his first book 2005’s L’intrépide.
Bisaro adapted one of his major poems “Octavia Or The Second Death of the Minotaur” to the theater.
In 2009, the French multidisciplinary artist performed at the Winter Shifts Festival and was handpicked by Didier Desmas for recognition in the festival’s avant-garde song category.
Bisaro had a role in a production of Chekhov’s The Seagull — and he collaborated on a show dedicated to Marina Tsvetaïeva.
He also collaborated on two different projects — a new staging of Les Valises with actors Hélène Arié and Jean-François Chatillion and a multidisciplinary performance featuring music, poetry and theater based on Yves Navarre’s poems “Chants de tout et de rien” and “Chants de rien du tout” with Ines Hammache.

In 2013 Bisaro released his full-length debut Beaujeau. Last year, he released his long-awaited Julien Vonarb-produced sophomore album Bruno Bisaro & Les Ourgans Gris. The album is a concept album, a musical novel of sorts, which features traditional songs, originals, spoken word, sound poetry and protest theater among others, dedicated to Bisaro’s friend and producer, Alain Moisset, who was a member of French punk rock act Via Viva, as well as to other lost friends.

Zooni is a rapidly rising Brighton, UK-based art pop/indie rock act — Peter Martin, George Godwin, Ben Clark and Matt Glasbey — that was discovered by Mercury Prize and BRIT Award-winning producer Charlie Andrew.  Last year was a momentum changing year for the British act: they released their debut EP,  which they supported with a sold-out show at London’s The Waiting Room and a set at that year’s The Great Escape.

Much like countless bands across the world, the members of Zooni hope to play shows as soon as humanly possible; in fact, they have some shows slated for the fall. But in the meantime, earlier this year, they released the critically applauded single “Dissolve,” and they’ve followed it up with their latest single, the ethereal “Details.” Centered around shimmering and angular guitars, propulsive and hypnotic drumming, atmospheric electronics, twinkling keys and plaintive vocals, the delicate yet painterly song sonically reminds me of OK Computer-era Radiohead and Forever So-era Husky — but within an expansive, prog-like song structure.

Brighton-based art-pop makers Zooni return today with new single ‘The Details’.  The follow up to their February single ‘Dissolve’. ‘The Details’ is a
powerful yet fragile mix of poetic lyrics and transcendent textures. Combining hypnotic beats with delicate piano and angular guitars it is available to stream below …

Discovered by Mercury and Brit award winning producer Charlie Andrew (Alt J, London Gramma, Marika Hackman), Zooni – Peter Martin, George Godwin, Ben Clark, and Matt Glasbey – played a Sold-Out headline show at The Waiting Room (London) in the summer of 2019, following on from an unforgettable appearance at The Great Escape Festival in that same year – and still hope to be playing some UK shows later this year.

Over the past 15 years, the acclaimed Norwegian-born, Stockholm-based singer/songwriter Ane Brun has released 12 albums of gorgeous and cinematic folk and art pop through her own label Balloon Ranger Recordings that have included 2005’s sophomore album, A Temporary Dive, which led to a Norwegian Grammy Award win for Best Female Artist; 2008’s critically applauded Changing of the Seasons, which was praised by The New York Times; 2015’s When I’m Free, which NPR’s All Things Considered called “best record yet . . . her most sonically ambitious . . .;” and 2017’s Leave Me Breathless, a collection of covers and reinterpretations of hits by Radiohead, Joni Mitchell, Nick Cave, Bob Dylan, and others.

Brun’s forthcoming (and still untitled) full-length album is slated or a fall release through her own label, and the album’s latest single, the self-recorded and edited “Trust” is a hauntingly gorgeous and cinematic track centered around an atmospheric arrangement of strummed acoustic guitar, shimmering synths and Brun’s gorgeously expressive and plaintive vocals. “It’s a song about letting go of all doubt and just letting yourself fall into the hands of fate, and trust that it’s all going to be alright,” Brun explains in press notes. “It was first written as a romantic song, but as we’re in this state of uncertainty around the planet, I feel it has gained more meaning.”

Before the single’s official release, Brun invited fans from around the world to join in for a pre-listening party and online chat. “Many of the people who participated were alone in their homes or with their cat or dog, a partner or their family. Some were in quarantine because they were infected with the coronavirus or because they work in healthcare,” Brun says. “What we had in common was that we were all affected by this difficult situation, and most of us were isolating from the outside world. We also felt a need to trust and meet other people. It was magical to come together like this.” The recently released video will resonate will many of us, who have been isolated and feeling alone and desperately wanting to be in touch with another person.

In their relatively short history, the band won the Utrecht Pop Award, played at Liberation Festival Utrecht and have toured across their native Holland, Denmark, Germany and Italy winning fans for a live sound that’s rousing yet intimate. Earlier this month, the Dutch indie sextet released their self-titled debut EP, and the EP’s latest single “My Head Was Drowned.” Centered around a rousingly anthemic hook, an enormous, swinging horn line, stuttering drumming, a bluesy guitar line and plaintive vocals, the expansive song is kind of like a seamless synthesis of 50s doo wop, arena rock and art pop that finds the young band walking a tightrope between a workman’s attention to craft, earnestness and ambition with an uncanny self-assuredness. 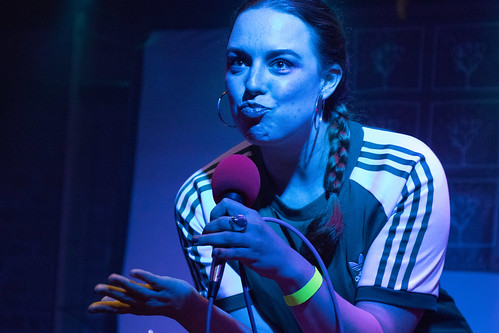 With the release of their critically applauded sophomore album Wahzu Wahzu, the Altamont, NY-based art pop duo The Parlor, comprised of multi-instrumentalist, singer/songwriter, production and husband and wife team of Jen O’Connor and Eric Krans further cemented a growing reputation for a fearless willingness to explore a variety of sound palettes and styles while crafting intimate and thoughtful pop music; in fact, the Altamont, NY-based duo have progressed from indie folk to stomp and clap trance folk to “campfire disco” as Pitchfork described Wahzu Wahzu.

Slated for an April 13, 2018 the Altamont, NY-based art pop duo’s forthcoming, third full-length effort Kiku derives its name for the Japanese word for chrysanthemum. According to O’Connor and Krans, chrysanthemum began blooming in their farmhouse garden immediately following their second miscarriage, and for the couple, the flower became a symbol of their grief, despair, resilience and faith. Sonically speaking, the album represents a continued evolution of their overall sound, as Kiku is the duo’s first foray into trigged samples and orchestral synth soundscaping. “Kiku grew into something we never anticipated,” the couple admits in press notes. As they were grieving, they turned to their art and began writing and recording material inspired by what they were feeling and thinking, as the couple says they felt themselves “reaching out across the plane of the living and the dead, where we stumbled upon the tiny hand of the soul we lost. We brought a pice of her, of Kiku, back with us.”

Understandably, the material on Kiku sounds gloomier and more anxious than their previously released work while reportedly balancing a playful and relaxed air at points that suggests that while profoundly serious, the album can be coquettish, sexy and earnest; in some way, the album is meant to be the inner world of a couple, who keep trying over and over again — perhaps, because as cheesy as it may sound to some, they have each other.

Kiku’s first single, album opener “Soon” draws from dream pop, contemporary electro pop, movie soundtracks, jazz and experimental pop in a heady and swooning mix — and while to my ears, bringing to mind the work of Moonbabies, Beacon, Softspot, Mazzy Star and Flourish//Perish-era BRAIDS, the members of The Parlor manage to specialize in incredibly slick and lush production featuring soaring hooks paired with fearlessly heartfelt lyrics and sentiment. Yes, it’s meant to break your heart time and time again, but with a deeper purpose — to remind the listener of their empathy. Grief is grief is grief. We all know this and we all experience it at various points in our lives, and we try to move froward; that is what people do after all.

As O’Connor and Krans explain in press notes, “‘Soon’ was intended as a metaphor for the stages of grief. The chrysanthemums represent grief itself. We carry grief around with us, often to unlikely places. We try at times to let it go, to fling our grief from great heights or hope it’s carried off by time — an offering to the flowing waters of the hills. But ultimately we find ourselves steeping in it, drowning in it, and ideally cleansed by it in a baptism of intentional release. Allowing ourselves to stop fighting forces us to experience things that, as humans, we often try desperately to avoid. Allowing ourselves to dance in glowing sunlight empowers us to reclaim our spirit. And we are transported to a deeper place of understanding of one’s self and of the human experience as we know it. ‘Soon’ is an expression of painful hope and illuminated heart.”

The duo directed, shot and edited the video for “Soon” and naturally, the video prominently features chrysanthemums throughout — sometimes the husband and wife duo proudly and defiantly carrying them about, at other points, the flowers are being offered to the proverbial flowing waters of time or treated as a sort of sacrifice; but no matter what the flowers and their grief is inescapable — until they accept it.