With the release of last year’s Noelle and The Filthy No-Nos, the New York-born, New Orleans-based singer/songwriter and keyboardist  Noelle Tannen quickly developed a reputation for a unique approach to singer/songwriter soul that draws from old school soul, neo-soul, jazz, blues, indie rock and gospel. “Proof,” Tannen’s latest single continues in a similar vein as her previously released work: effortlessly soulful material centered around her self-assured and sultry vocals and an arrangement featuring shimmering blasts of keys, a sinuous bass line, shuffling jazz-like drumming, gorgeous horn arrangement and an infectious, radio friendly hook — within an expansive song structure in which you’ll hear temp changes and key changes throughout. Arguably, this track may be the most straightforward song in their growing profile; but paired with a powerful and uplifting message.

As Tannen explained to Live for Live Music, “”Proof’ is a song about the constant struggle many women face of having to Prove ourselves and work extra hard just for people to take us seriously,” Tannen shares. “It’s about how exhausting that struggle can be. However, the song is supposed to portray a motivational message. Let’s keep on working hard, but while doing so, not to forget about the beauty of life and the earnestness in creation. Let’s not allow the haters to get in the way! We got this ladies.”

Featuring brothers Alix, Miles and Reece Melendrez and schoolmate Matt Mumician, Decorator  is an up-and-coming Los Angeles, CA-based indie rock/indie soul quartet, who publicly claim a rather wide and diverse array of influences that include the music the Melenderez Brothers heard quite a deal of while growing up — Jimi Hendrix, The Isley Brothers, Bob Marley and contemporary acts like Lauryn Hill, Wu-Tang Clan, Gorillaz and others. And interestingly enough, the project which attribute their name from a famous Frank Zappa quote “without music to decorate it, time is just a bunch of boring production headlines or dates by which bills must be paid” can trace their origins to when the Melendrez Brothers taught themselves how to play covers of the songs they heard so much growing up. As high schoolers, the Melendrez Brothers began writing their own music — and their folks drove them to school night gigs in which they played in bars they weren’t even be allowed in without their gear.

Wanting to master their instruments and to do their own thing, the Melendrez Brothers enrolled themselves at Silverlake Conservatory of Music, founded by Red Hot Chili Peppers‘ Flea, where they met and befriended fellow student Mumician and started writing music together. However, it took several years before the band took their music out of garage rehearsals and house parties and were able to concentrate on their music full-time, as the band’s youngest member, Reece Melendrez honored his promise to his folks to graduate from high school before making music a full-time effort.

With the release of their 2014 self-released debut EP Transit, the band quickly received a growing local profile and fanbase, including their first headlining set at the renowned Troubadour, thanks in part to a sound that draws equally from classic soul, indie rock, contemporary pop and neo soul — and in a way that manages to be uncompromisingly difficult to pigeonhole. The Los Angeles-based quartet’s latest single sonically speaking seems to owe an equal debt to Tame Impala‘s Currents, the Cascine Records roster, Neon Indian and 80s synth soul as the quartet pairs shimmering and undulating synths with a sinuous groove, an infectious hook and Miles Melendez’s sultry falsetto.  Lyrically, the song’s vulnerable narrator admits to be run around in circles by an unrequited and cruel love interest, with whom he feels desperately and inexplicably pulled towards — and as much as he wants to pull away, to move forward with his life, he feels trapped in a vicious and unfulfilling circle. Certainly, what’s remarkable to me about this band is the fact that their material manages to possess a maturity and self-assuredness that belies their youth.

So strangely enough, while checking out the video, which would wind up comprising this site’s previous post, the related video tab on YouTube brought up live footage of Mayer Hawthorne and backing band playing a breezy cover of ELO’s “Mr. Blue Sky,” on KCRW’s Morning Becomes Eclectic several years ago and coincidentally, the track appears on Impressions. The internet is a wonderful place, is it not?

Remi is a 23 year-old Melbourne, Australia-based emcee and along with collaborator and producer Sensible J, the duo have quickly risen to national and international prominence with 2014 being the duo’s breakthrough year as their Raw X Infinity was critically […]

Zak Waters is a Los Angeles, CA-based singer/songwriter, DJ and producer, who has started to grab the attention of the blogosphere with his solo recording project Pretty Sister, a project that specializes in what Waters had dubbed Z Funk, a sound that is equally indebted to Parliament Funkadelic and 90s G-funk hip-hop; but with modern production techniques and a shamelessly frank lyrical sensibility that focuses on things like booty-call texting, long distance love and sexual frustration and so on. And with Waters’ latest single, the sensual come on “Come to L.A.,” you’ll quickly see why the Los Angeles-based singer/songwriter, producer and DJ has received praise from the likes of Vice Noisey, HillyDilly and others as the song consists of a sinuous bass line, silky and cascading organ and keyboard chords paired with Waters’ sultry and effortlessly soulful vocals. Sonically speaking, the song strikes me as being the oversexed lovechild of Rick James and Parliament Funkadelic while fitting in comfortably with the contemporary neo-soul and funk movements that have won over the blogosphere lately. 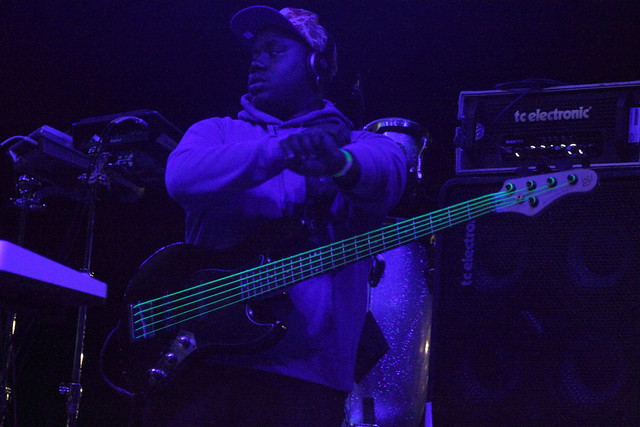 Seattle has a long-held reputation for being the home of an important indie rock scene but over the past few years, the Pacific Northwestern city has started to develop a reputation as the home of […]