Initially formed as a duo featuring founding members, longtime partners an co-frontpeople Andy Simmons and Holly MacGibbon, the Brooklyn-based dark pop/post-punk act Weeknight received attention with the release of 2014’s full-length debut Post Everything.  And as the story goes, after playing hundreds of shows to support Post Everything including touring with Phantogram, Bear in Heaven, Frankie Rose, Moonface, School of Seven Bells, and Crystal Stilts, the duo returned home and began to write the material that wound up eventually comprising their forthcoming sophomore album Dead Beat Creep, which is slated for a February 1, 2019 release through Dead Stare Records.
Written at the duo’s Bushwick home studio and recorded during the bleak winter of 2017 at House Under Magic Studios with co-producer and engineer Danny Taylor, the recording sessions for the album found the band expanding into a quartet with the addition of Russell Hymowitz (bass) and Jasper Berg (drums). And while inspired by the disillusionment of the 2016 election and profound loss and grief, the album’s material finds the band imposing limitations as they were writing and recording, as the band’s Andy Simmons explains in press notes: “We would only use analog gear and we would only write parts that we would be able to play live.”

Interestingly, the album’s latest single “Holes In My Head” manages to bring classic 4AD post-punk to mind as the track is centered around a moody arrangement featuring shimmering and arpeggiated synths, an angular and propulsive bass line, delay pedal effected guitars, dramatic drumming and a rousingly anthemic hook –with a clean, studio polish. However, the song was written for Holly MacGibbons’ father, who died last year after a decade struggle with Alzheimer’s disease. It was written from his perspective, and says what I imagined he would have wanted to say to me if he was able to,” the band’s Holly MacGibbons explains in press notes.

Mark Berg is an Edmonton, Alberta, Canada-based singer/songwriter, electronic music artist and producer, whose solo recording project Tropic Harbour specializes in hazy, dream pop inspired by nostalgic images and dreams of the coast, during the summer — and in many ways, Berg reportedly created the project as a way to mentally escape the harsh Edmonton winters. Along with a backing and that features Kurtis Cockerill
Andrew Brostrom, and Marcus Rayment, Berg began receiving national attention, playing at a number of Canada’s renowned festivals including Pop Montreal, NXNE and Sled Island, as well as opening for the likes of DIIV, Jessy Lanza, Homeshake and Will Butler.

Berg’s latest Tropic Harbour single “Can’t Pretend” will further cement his reputation for crafting, 80s-inspired, nostalgia-inducing and summery synth pop; however, it’s a much more downtempo and atmospheric production featuring a sinuous bass line, gently swirling electronics, shimmering synths and stuttering drum programming, and in some way, the song sonically speaking will remind some listeners of I Love You It’s Cool-era Bear in Heaven, Neon Indian and others — while thematically focusing on its narrator letting go of a past relationship and trying to find himself again in the process.

Led by mysterious singer/songwriter and multi-instrumentalist Constantine Anastasakis, Blonder is a New York-based act, that has received praise from the likes of Clash Magazine, Pigeons and Planes and Nylon, and has songs placed on several Spotify Playlists, including Indie Mix for a synth-heavy sound that nods at Cut Copy, Bear in Heaven, St. Lucia and others. And the act’s latest single “Talk To Me” will cement their reputation for slickly produced synth pop-leaning rock as a sinuous bass line is paired with atmospheric and shimmering synths, a soaring and anthemic hook and Anastasakis’ plaintive vocals. in what may arguably be the act’s most dance floor-friendly yet wistful song they’ve released to date. 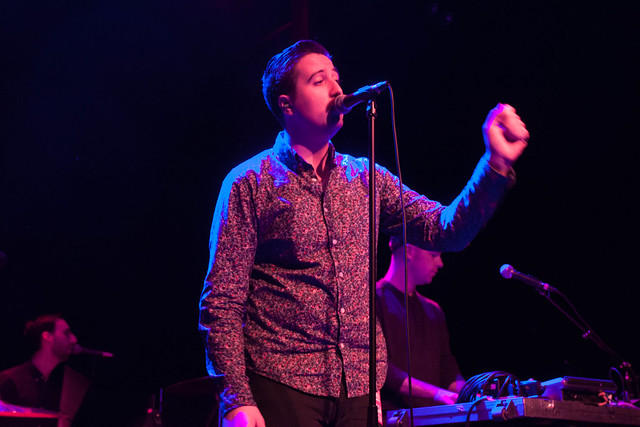