Tiger Darrow is a Dallas-born, Brooklyn-based singer/songwriter, multi-instrumentalist and producer, perhaps best known for her roles in the Spy Kids franchise and Shark Boy and Lava Girl. Since the release of those movies, Darrow has grown up and pursued a career in music — first behind the scenes writing for other artists and then eventually as a solo artist, influenced by St. Vincent, Sufjan Stevens, Bulow, and Lana Del Rey.

Darrow has opened for the likes of Edie Brickell and The New Bohemians, The Eagles, and Erykah Badu and she’s also played as a sideperson for Durand Jones and The Indications, Zack Villere, Camille Trust and Wakey! Wakey! Her latest single “Brother’s Girl” is a atmospheric yet slickly produced, radio friendly bop centered around Darrow’s sultry crooning and skittering trap beats — and while evoking an unfulfilled longing, the song features an ironic plot twist: the song’s narrator describes falling for her brother’s girl. Sounds like an episode of Jerry Springer, indeed!

Over the past few years of this site’s almost nine year history, I’ve written a bit about the up-and-coming Tampa, FL-born, New York-based soul/pop artist, Camille Trust. And as you may recall, Trust has publicly cited Janis Joplin, Lauryn Hill and Etta James as major influences — although from her live shows and raw, unvarnished honesty, her work strikes me as being much more indebted to Mary J. Blige.

Last year was big year for the Tampa-born, New York-based soul/pop artist as she released her long-awaited debut EP No Other Way, which featured the sultry “Freak,” a track that to my ears was part Gwen Stefani “Hollaback Girl” part Mark Ronson’s “Uptown Funk” part Rick James with an Earth Wind and Fire-like horn line. Sonically, the song was a strutting and swaggering bit of hook-driven funk paired within a brash and boldly feminist anthem in which, the song’s narrator openly and freely talks about lust and desiring raunchy, freaky sex from her object of affection.  Building upon the attention that she received for “Freak,” Trust’s latest single “Scandalous” continues in a similar vein — sultry and strutting, hook-driven funk with a sinuous bass line, a big horn line; but unlike its predecessor, the song sounds a bit more indebted to Prince and Carl Carlton’s “She’s a Bad Mama Jama” and The Gap Band, with a self-assured, come-hither performance from Trust.

Directed by Dylan Perlot and featuring choreography by Camille Trust and Ivy Ledon, the recently released video for “Scandalous” continues from its predecessor, following Trust is a feverishly shot visual that features split screens, 80s styled Flashdance-like dance routines and some sultry strutting from Trust and her backing dancers — as expected. Much like the song it accompanies, it’s brash, self-assured and just a lot of fun, capturing a young vocalist, who I think we’ll be hearing quite a bit more from.

Throughout the past handful of years, I’ve written a bit about Camille Trust, an up-and-coming Tampa, FL-born, New York-based soul/pop artist. And as you may recall, Trust has cited the likes of Janis Joplin, Lauryn Hill and Etta James; however from with her energetic, dynamic stage presence and raw, unvarnished honesty, her work to me, seems much more indebted to Mary J. Blige.

2018 has been a big year for the Tampa-born, New York-based soul/pop artist, as she released her long-awaited debut EP No Other Way. Trust closes out the year with the release of “Freak,” a sultry track that draws from both classic soul, contemporary pop and hip-hop simultaneously as its centered by a Gwen Stefani “Hollaback Girl” meets Mark Ronson‘s “Uptown Funk” meets Rick James-like performance from Trust, handclap-led hook, a horn arrangement reminiscent of Earth Wind and Fire. But more important, the song is a brash, boldly feminist anthem in which the song’s narrator talks about wanting and needing raunchy, nasty, freaky sex from her object of affection.

Directed by Tanima Mehrotra and featuring choreography by Camille Trust and Ivy Ledon, the recently released video features Trust and a series of different backing dancers shot in a series of dressed in bold, bright colors in front of equally bold, bright backgrounds — before pulling out to reveal the behind the scenes, with Trust taking off earrings and getting ready for a successive video. Much like the song, it’s brash, sensual, playful and captures the artist’s swaggering and undeniable confidence and presence.

Camille Trust is an up-and-coming, Tampa, FL-born, New York-based soul/pop artist, who’s influenced by the likes of Janis Joplin, Lauryn Hill and Etta James — although with her energetic and dynamic stage presence and raw, unvarnished honesty, her work seems much more indebted to the likes of Mary J. Blige. Now, as you may recall, I caught the Tampa-born, New York-based soul/pop artist performing an opening set Baby’s All Right that featured sultry covers of Bonnie Raitt’s “Something to Talk About” and Stevie Wonder‘s “Signed, Sealed and Delivered,” and a collection of singles that she’s released over the past few years, as well as material off her recently released EP — including her latest single, “Lose You,” which pairs Trust’s effortlessly soulful vocals with a modern production consisting of stuttering beats, brief horn blasts, twinkling keys and an explosive, radio friendly and rousingly anthemic hook; but underneath the swaggering and thumping production, is a plaintive and urgent plea to a lover, who seems ready to bolt. 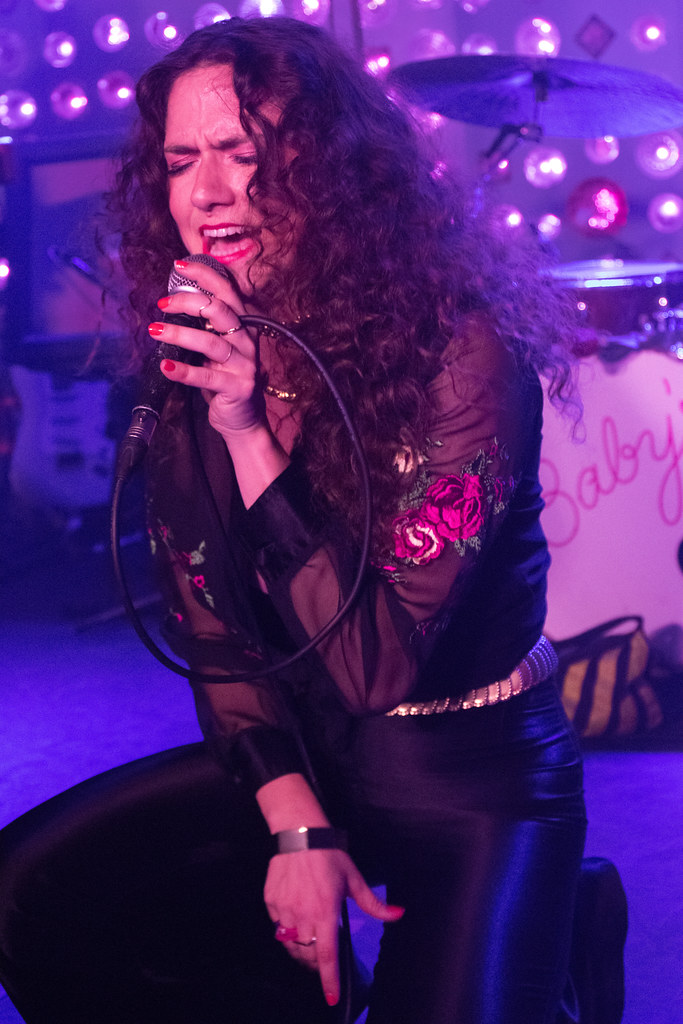 Born and raised in Tampa, FL and currently located here in NYC, Camille Trzcinski, who performs under the moniker Camille TRUST is a singer/songwriter, whose sound according to her website is deeply influenced by Motown and […]