Brattleboro, Vermont-based outfit Thus Love — multi-instrumentalists Echo Mars (she/her) and Lu Racine (he/him) and bassist Nathaniel van Osdol (they/them) — is a rising indie trio with a bond cemented by their individual and collective experiences as outsiders looking in: They’ve ascribed to a DIY ethos that not only reflects their musical vision but their very existence as three self-identifying trans artists.

The band can trace its origins to Mars’ and Racine’s serendipitous meeting at a local print show back in 2018, when the multi-instrumentalists agreed to collaborate on a new musical project. The band’s lineup was finalized when Mars and Racine were finally able to convince their roommate van Osdol to join the band in 2019.

From the band’s inception, its members have lived together under the same roof, designed and produced their own merch, and even created their own recording studio from scratch. “I realize that most artists don’t live this way,” Thus Love’s Echo Mars says. “But for us, it was never really a choice. The art we make is so tied to who we are and the community we’re a part of, that this is the only way we can possibly do it.”

The trio was just starting to regularly headline renowned local venue The Stone Church when the pandemic struck and everything came to a sudden and screeching halt. “The pandemic hit everyone hard, but I think it was especially difficult for new artists like us that rely on live shows to spread the word,” Thus Love’s Lu Racine says. “At that point, we had a couple of demos and we weren’t sure what the future would hold.”

Rather than idly wait, the band decided to take their future in their own hands. Armed with their innate curiosity and a ton of YouTube videos, Mars constructed a makeshift studio in their downtown Brattleboro apartment and the band set to work recording during the odd hours when their next-door neighbors were out and about.

The end result is the rising band’s full-length debut Memorial. Slated for an October 7, 2022 release through Captured Tracks, Memorial is reportedly a remarkably self-assured and accomplished album, considering the circumstances surrounding its creation. While sonically, the album’s material draws heavily from classic post-punk and indie rock, the band manages to tap into that sound and approach and find a way to find their own voice — and to tell their story.

Looking back now, Mars is glad the band decided to forge ahead. “I obviously would never want to go through a pandemic again, but I’m pretty confident in saying that this album would not be coming out in 2022 if we hadn’t had the forced downtime.”

While the album does deal with grief and loss, the band’s Racine suggests that working through those feelings are a necessary prerequisite to true and meaningful healing. He points to his own process of transition as proof. “I was in a dark place for a long time even when we were making this record. I knew what I had to do, but it didn’t make it any easier. There was a long period of mourning.” Racine completed top surgery last September, an important step in a years-long journey to embrace his true self. “Even though I was struggling at the time, the happiness I feel now makes it all worth it. I will always have positive associations with this record.”

“In Tandem,” Memorial‘s latest single is centered around angular, reverb-drenched guitar attack, glistening and atmospheric synths and a relentless, motorik punch paired with a rousingly anthemic chorus. While sonically “In Tandem” brings 4AD Records‘ heyday to mind, the song is simultaneously rooted in bitterness, heartache and hope. As the the band explained to the folks at FLOOD, “Written in 12 hours of digestion of emotional turmoil, ‘In Tandem’ is a sonic promise to hold awareness of a fundamental truth: we are nothing but star-dust.”

Directed and edited by Erin Vassilopoulos, the accompanying video for “In Tandem” is simultaneously nightmarishly surreal and playful as it follows the band performing the song — and as a John Waters diva-esque monsters posing for pictures and eating breakfast at a divey diner. 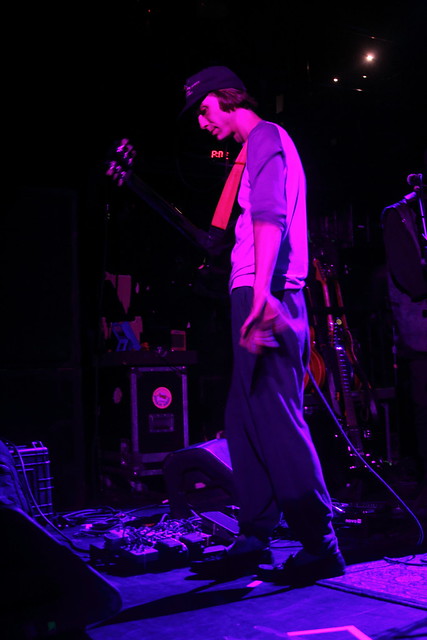 Seattle, WA-based singer and songwriter Justin Vallestros writes, records and performs under the moniker of Craft Spells, and the folks at Captured Tracks will be releasing his much-awaited sophomore effort, Nausea, which is the follow up […]

The battery on my Macbook Pro was near it’s last gasps and it finally gave up the ghost – while working on a post. But the great folks at Tekserve were able to replace the […]

Originally formed in 1982 by Bremen, Germany-based DJ Ralph “von” Richoven, Saada Bonaire was a studio project based around two, young and very sultry German vocalists and a diverse backing band whose sound could be […]

The Portland, OR-based duo of Soft Metals released their debut self-titled album back in 2010 through Captured Tracks, and the album was reportedly had a psychedelic sort of haze with spiraling synths and pop melodies. […]