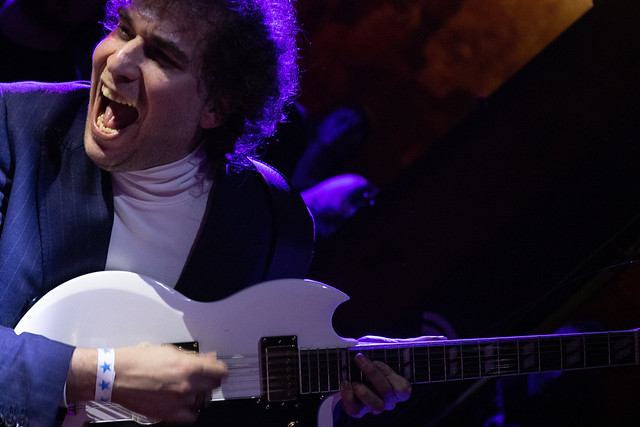 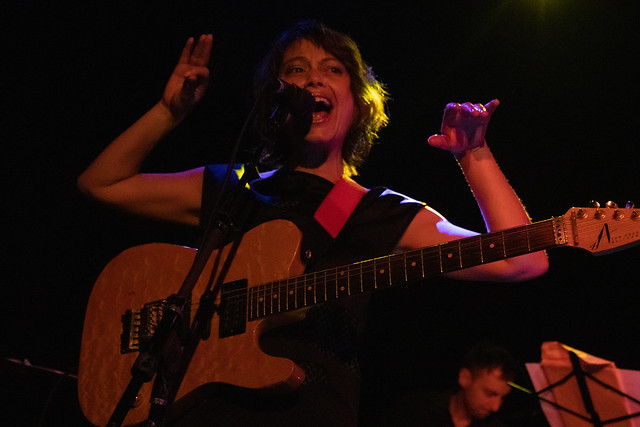 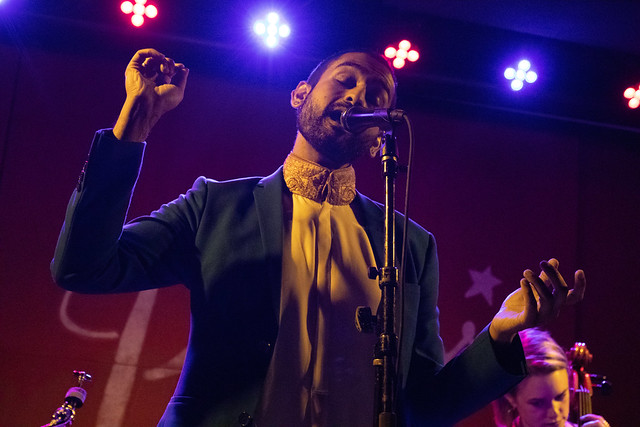 Throughout JOVM’s eight-plus year history, I’ve covered Association of Performing Arts Presenters (APAP)’s annual conference in some fashion or another. As a national service, advocacy and membership organization for those within the performing arts — particularly within dance and theater, APAP over the years has developed a reputation for their role in assisting musicians and groups, who specialize in “world music.” Along with the annual conference, which features discussion panels, lectures, networking sessions and the like for artists producing, recording and creating artwork in our extremely complicated and confusing political landscape, there are a number of carefully curated showcases hosted and/or sponsored by this city’s best known “world music” venues.  Now, as you may recall, the Lower East Side world music venue DROM hosts Barbes’ and Electric Cowbell’s annual Secret Planet APAP showcase — and earlier this year, their wildly eclectic showcase featured the New York-based Colombian folk collective Bulla en el Barrio; the Brooklyn-based act Drunken Foreigner, which specializes in a sprawling, psych rock-like iteration of the Akha and Lam Lao musics of Thailand and Laos; the Cleveland, OH-based Afro-futuristic soul act Mourning [A] BLKSTAR; the New York-based Afro-futuristic-inspired, psychedelic cumbia act Combo Chimbita; the New York-based Ethiopian funk and jazz-inspired septet Anabessa Orchestra; and the New York-based act Hearing Things which specializes in a sound that draws from Middle Eastern music, surf rock, and 60s soul and R&B.

Featuring Bulla en el Barrio’s Carolina Oliveros (vocals) along with Prince of Queens (synths and bass), Niño Lento (guitar) and Dilemastronauta (drums), Combo Chimbita began experimenting with different traditional music styles during their late night residencies at Barbes — much of this experimentation included explorations between visual identity and improvisational long-form trips that eventually lead to their thunderous 2016 self-recorded debut, El Corridor del Jaguar. Interestingly, much like Mourning [A] BLKSTR, the New York-based act is deeply inspired by Sun Ra’s Afro-futurism — while championing their own take on it, which they’ve dubbed Tropical Futurism. As the band says “the idea that the future doesn’t necessarily have to be this super white Western high-tech Star Wars stuff; that the indigenous ideas and culture of people of color, people of Latin America, can also represent a magical and substantial future. It’s a vision that maybe a lot of people don’t necessarily think about often. The old and deep knowledge that indigenous people have of the land has been neglected for many years as part of capitalism and colonization.”

Their Lily Wen-produced sophomore full-length album Abya Yala was released through Figure & Ground Records was released back in 2016, and the album further established the band’s unique futuristic take on cumbia. And along with an incredible live show, led by Oliveros powerhouse vocals and commanding stage presence, the New York-based act has begun to receive quite a bit of buzz. In fact, renowned Los Angeles-based label ANTI- Records, a label known for having a roster of wildly eclectic array of artists that includes the legendary Mavis Staples, recently signed the band. As the band’s Prince of Queens says in press notes, “ANTI- is a special label. It is crazy to be part of such a diverse pool of artists, feels extra special being an immigrant band singing in Spanish. I grew up in Bogota listening to a lot of bands on Epitaph and not understanding a word they were singing but it made me want to be in a band and learn music. It feels like full circle working with [Epitaph’s sister label] ANTI-.”

The members of Combo Chimbita will be closing out a big year with a series of live shows the include sets at Lincoln Center and Philadelphia’s PhilaMOCA before joining Parquet Courts for the Midwestern leg of the indie rock’s current tour. You can check out the tour dates below. But before that, the band has released a trippy new single “Testigo,” a track centered by a looping Afro pop-like guitar line, shimmering and arpeggiated synths, rolling and propulsive percussion, a sinuous bass line and Oliveros’ powerhouse vocals. Sonically speaking, their sound serves as a power reminder of how much contemporary music — particularly Latin American music — draws from Africa, as much as it does from their own native traditions, and they do so in a wildly anachronistic yet dance floor friendly fashion.

Founded by some of the originators of CMJ and its long-running CMJ Marathon, Mondo.NYC is a music, technology and innovation-based festival that within its first couple years has quietly taken the place of both the CMJ Marathon and New Music Seminar’s New Music Nights Festival. Now, as you may recall, the third edition of Mondo.NYC took place last week and it found the global, emerging music, technology and innovation conference moving a few miles east across the East River to Williamsburg, Brooklyn with  The Williamsburg Hotel,Rough Trade and Brooklyn Bowl hosting daytime conference-related events hosted by  The Recording Industry Association of America (RIAA), Guild of Music Supervisors,Record Store Day, and others meant to connect fans, artists, music industry professionals, business pioneers and leading names in tech and music to network, trade ideas and learn in a rapidly changing industry landscape. Additionally, the panels, talks and other events were meant to inspire young people to take control of their careers — whether they were heading towards a technological-based career, behind the scenes in A&R, marketing, promotion, management and publicity or up in front as an artist.

One of the artists who played during the music festival portion was the Swedish adult contemporary pop artist ELINDA, the collaborative music project of the Ekerö, Sweden-born, Stockholm, Sweden-based singer/songwriter and dancer Linda Östergren Frithiof and her husband, multi-instrumentalist and producer Mikael Frihiof. Linda Östergren Frithiof can trace the origins of her performing career as a trained dancer, studying at  the Lasse Kühler Dansskola School and the Ballet Academy, one of Scandinavia’s leading dance schools. While training as a dancer, it was discovered that Östergren Frithiof had a commanding voice and once she graduated dance school, she began performing at nightclubs, cabarets, vacation resorts, cruise ships and corporate events before landing gigs as a backup singer for a number of major Scandinavian artists including Magnus Uggla, Markoolio and E-Type, Shirley Clamp, Martin Stenmarck and Charlotte Perrelli, as well as Lutricia McNeal. She’s also sang vocal demos for Celine Dion, and collaborated with the likes of Leif Larsson and Anders Borgius for Swedish artists like Björn Skifs and David Hasselhoff. (Yes, David Hasselhoff.)

Adding to a rather diverse and eclectic career path, Östergren Frithiof has played Sally Bowles in the Stockholm-based production of Cabaret and Joanne in the Stockholm-based production of RENT before joining The Original Band — The Abba Tribute, which features a number of musicians who have played with ABBA either on their records or tours. Additionally, Östergren Frithiof, was involved in the casting, choreography and scripting for the show, which has toured across Sweden and has performed in China several times, including a televised audience of more than 100 million viewers for the Chinese New Year broadcast.

Östergren Frithof, has been building up a profile as a solo artist largely inspired by the sounds, vocal styles and stage shows of Celine Dion, Whitney Houston, Chaka Khan, Prince, Justin Timberlake,Beyonce, Alicia Keys, Ariana Grande and Bruno Mars. With her husband and collaborator Mikael, they formed a label Breaking Records and began writing and recording original material that draws from her own life, centered around her struggles and victories as an artist and mother of five. Interestingly, her MONDO.NYC set at Piano’s was her Stateside debut and I spoke to the up-and-coming Swedish adult contemporary pop artist and her husband at P.J. Clarke’s Lincoln Center location about her career to date, the MONDO.NYC Festival, her dance floor friendly, feminist anthem “Superwoman” and a lot more. Check it out.

Founded by some of the originators of CMJ and its long-running CMJ Marathon, Mondo.NYC is a music, technology and innovation-based festival that within its first couple years has quietly taken the place of both the CMJ Marathon and New Music Seminar’s New Music Nights Festival. Interestingly, the third edition of Mondo.NYC, which will take place October 2, 2018 – October 5, 2018 finds the global, emerging music, technology and innovation conference moving east across the East River to Williamsburg with The Williamsburg Hotel, Rough Trade and Brooklyn Bowl hosting daytime conference-related events. Interestingly, those daytime events feature partnerships with The Recording Industry Association of America (RIAA), Guild of Music Supervisors, Record Store Day, a collection of international consular and export agencies and others to connect fans, artists, music industry professionals, business pioneers and veterans, leading names in tech and music to network, trade ideas and learn in a rapidly changing industry landscape as well as inspired others to become the industry leaders and up-and-coming artists of the future. Live music will take place on both sides of the East River with showcases being hosted by the aforementioned Brooklyn Bowl, Piano’s, Berlin, Arlene’s Grocery,  Coney Island Baby, The Delancey, DROM, Hank’s Saloon, Niagara and N.O.R.D.

Some quick highlights include:

Mondo’s speakers include key leaders from the emerging music and frontier tech industries:

Of course, I’m looking extremely forward to catching some of the incredibly diverse music offerings, including:

For more information, including tickets, showcases, talks and more, go the following: https://mondo.nyc

Hopefully, I’ll be covering the events of the conference, and if so, be on the lookout for a variety of live conference through my various social accounts: 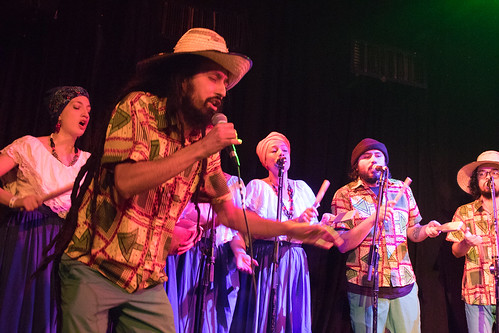