With singer/songwriter Victoria Celestine having spent a significant portion of her childhood growing up in France and in San Antonio, TX, music became a refuge and one of the languages she was most fluent in was music; in fact she first learned the piano and upon her return to States, she learned guitar, both of which helped her as a songwriter.

As the story goes, Celestine was at an open mic in downtown San Antonio when Gordon Raphael, best known for his work producing The Strokes, Regina Spektor and others had discovered her and invited her to record some of her then-more acoustic-based material. In fact, with her acoustic material, Celestine placed highly in the International Songwriting Competition, was nominee in the International Acoustic Music Awards, and as a result she’s had several songs hit the iTunes Charts. (From what I understand, some of her acoustic material will be released on a 3 song EP, produced by Blake Harnage of VERSA sometime next year.)
In the meantime, her debut EP, which is also slated for release sometime next year is a slickly produced collection of crafted pop songs that’s remarkably contemporary; in fact, the EP’s third and latest single “As We Grow Old” manages to be reminiscent of the likes of Little Boots, Chelsea Lankes, Phoebe Ryan and others as it pairs Celestine’s sultry cooing with a bouncy, upbeat production featuring gently cascading synths, skittering drum programming and swirling electronics. But lyrically the song stands out from a crowded field as it openly discusses how difficult it is to be what you think you might want to be when other people are forcing you to be and do things that you’re not — or that you’d hate. But it also suggests that the only way to live is to be unabashedly you because you don’t want to be old and live a life of regrets. Imaging popping in an actual message in between catchy hooks, eh? 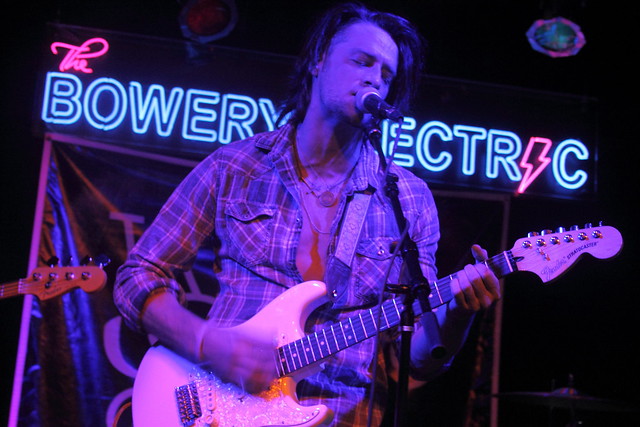 Russ Manning, a member of Twin Shadow, released one of my favorite albums last year, +1 EP under the moniker Rush Midnight. The material on  that EP is reminiscent of the slickly produced, seductive, synth-based R&B you’d hear on WBLS’s […]

The Octopus Project’s latest full-length album, Fever Forms was released earlier this year by Peek-A-Boo Records, and sonically, the album has the relentlessly experimental Austin, TX-based quartet altering their sound –there’s more of an emphasis on buzzing […]