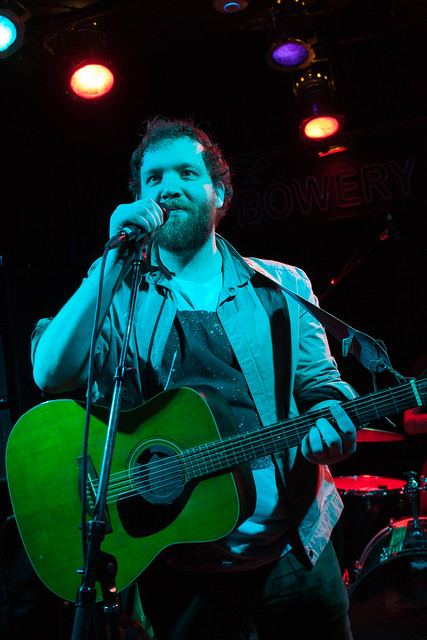 Now, it’s been some time since we’ve heard from them but the band’s long-anticipated third full-length effort Otero War is slated for release this summer. And the album’s first single “Never Going Back” is arguably the most upbeat and anthemic song the band has released to date, while sonically sounding as though it drew from early 80s Bruce Springsteen (in particular, think of “Dancing In The Dark“) but with Carbonetti’s gorgeous guitar work paired with soaring synths and Iwanusa’s plaintive vocals, while dealing with themes that Springsteen would have easily written about back then — figuring out the complications of love, desperately wanting to escape a humdrum and bland life, of recognizing that at a certain point, your decisions loom larger and larger over your life and more. It’s powerfully universal and speaks to things we’ve all felt and known at some point in our own lives.

Originally begun as a solo side project from her time with Vivian Girls and All Saints Day, Katy Goodman’s current musical project La Sera has developed a national profile with three critically applauded albums, her self titled debut, Sees the Light and Hour of the Dawn, which were released through Hardly Art Records.  Goodman’s last album, 2014’s Hour of the Dawn was very much a punk-inspired album; however, with the release of “High Notes,” the first single from her forthcoming album, Music For Listening To Music To reveals an artist, who has gone through both personal and artistic transitions. Sonically and structurally, the song reveals that Goodman has returned to an elegant and solid simplicity — it pairs the sort of shimmering guitar chords of The Smiths and the propulsive, old-school chugging rhythm of Johnny Cash (in particular, think of “Folsom Prison Blues,” “Jackson” and countless others) with Goodman’s wistfully ethereal coos. And interestingly enough La Sera has added personnel to flesh out the project’s sound — Goodman’s guitarist, cowriter and husband Todd Wisenbaker, who is probably best known as a member of Listening To Music To‘s producer Ryan Adams‘ backing band.

Of course, “High Notes” makes a vital connection between punk, post-punk and renegade country that countless others have done before while possessing a sneering, real life irony that many of us have faced before — after a breakup, taking the high road not because you actually believe that it’s the best thing but for appearances and because you want to get the last word. It’s probably the most honest and heartfelt sentiment I’ve come across in quite some time.

Ravensdale, WA-born and Seattle, WA-based singer/songwriter Brandi Carlile can trace the origins of her music career to her childhood — when she was 8 she performed Johnny Cash‘s “Tennessee Flat Top Box” with her mother […]

Comprised of a group of high school classmates and friends, the Hershey, PA-based quartet The Ocean Blue quickly rose to national prominence with the critically applauded release of their debut effort through Sire Records back in 1989 — and of course, that also meant major radio and MTV airplay. The quartet went on to release two more well-received records through Sire, Cerulean and Beneath the Rhythm and Sound and a fourth album See the Ocean Blue through Mercury/PolyGram before leaving the major label game in the late 90s, which arguably made them one of the earliest and better known acts to do so.

In the 2000s (and that phrase just looks and sounds utterly doesn’t strange doesn’t it?), the band released several independent releases including Davy Jones Locker and Waterworks before going on a lengthy hiatus, which ended with the 2013 release of Ultramarine through Korda Records, a Minneapolis-based (where the band  cooperative label that the band helped launch.

Recently, the band re-issued their first three Sire Records releases on vinyl — for the first time in over 20 years — and to celebrate the occasion the band played a small handful of special shows playing material from those albums live, to celebrate the occasion.  And from what I hear, the band is working on a full-length of new material, slated for release sometime next year.

But in the meantime, the band shared a lost and previously unreleased single from the Sire Records days, “City Traffic” which consists of shimmering guitar chords played through gentle layers of reverb, soaring organ chords, propulsive drumming and plaintive vocals in a song that sounds as though it possesses elements of The Smiths and 120 Minutes-era alternative rock thanks to its anthemic hooks.

Born in Nantes, France singer/songwriter Heloise Letissier studied theater and art, before relocating to Paris, where she completed her studies. While in London, Letissier became deeply inspired by the drag queen scene originating from that […]

Over the past 100 years, there have been a handful of people that every musician and every music fan should hold revered, as they’ve managed to change how the music we love sounds, how its […]

http://www.npr.org/player/embed/442320383/442326741 Boulevards is the solo recording project of the North Carolina-based Jamil Rashad. Now if you’ve been following JOVM over the past couple of months, you may be familiar with Rashad — but for those new […]