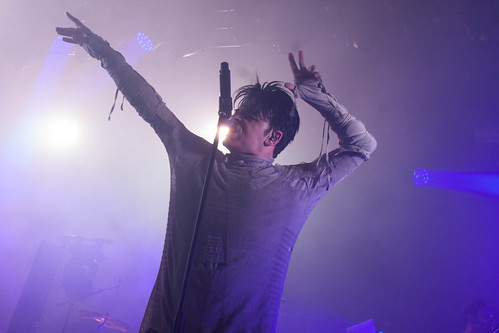 Comprised of Kazu Makino (lead vocals, rhythm guitar) and twin brothers Simone (drums) and Amedeo Pace (guitar, vocals), New York-based indie rock trio Blonde Redhead can trace their origins to when the Pace Brothers met Makino — by complete chance, no less — at an Italian restaurant. Deriving their name from “Blonde Redhead,” a song by no wave act DNA, the trio has developed a reputation for a constantly evolving sound with their earliest recorded efforts drawing heavily from both noise rock and experimental rock — in particular, think of Sonic Youth and others; however, over the past 15 years the band has incorporated elements of dream pop, shoegaze, psych rock and other genres. And if you’ve been frequenting this site for some time, you may well be aware of the fact that back in 2014, the trio quietly released their ninth all-length album Barragan, an album that featured the shimmering and sultry single “Dripping.”

As a native New Yorker, I miss the energy, griminess and grittiness of pre-Giuliani New York — a New York that I’ll never, ever get back. And as you can imagine, Blonde Redhead’s material, along with countless other bands writing and recording in NYC during the late 80s and early 90s is full of the same teeming energy and seedy grit, while possessing an urgent carnal need. Sadly, a great deal of the band’s earliest recordings haven’t been in print for some time — and they will be seeing the light of day for the first time in almost 20 years as Numero Group is issuing a 4LP/2 CD box seat featuring the band’s first two albums, their singles, existing demos and radio performances, as well unpublished photographs and two lengthy essays on the band and their work to date. And it’s the newest installment in Numero’s 200 Line series, which has also included releases from  Unwound, Bedhead, Codeine, White Zombie and The Scientists.

“Big Song” is the first single off the box set and the single is a decidedly large song consisting of time signature and tempo changes, explosive blasts of feedback, angular bass and guitar chords — with the guitar chords being played through effects and delay pedals, paired with Makino’s sensual and vaguely nonsensical vocals. Certainly, as soon as you hear the song, it also sounds like the time period it was recorded in — in particular 1993 or so. Certainly if you’re a fan, there’s the excitement of hearing and owning material that had long been discontinued, as well as capturing a band in their early days, attempting to discover their own unique voice.

Back in 2014, Blonde Redhead quietly released their ninth full-length effort Barragan, an effort that includes the shimmering and sultry single “Dripping.” The New York-based trio promptly released a hazy and gorgeous video for the song that also doubled as an advertisement for British fashion label All Saints, which you can catch below. Interestingly, comedian, actor and musician Eric Wareheim, best known for his work in comedy duo Tim and Eric is a huge Blonde Redhead fan and he figured that he could two things — create a better video and craft a love letter to his favorite band. And much like the original video, Wareheim’s video is gorgeous, featuring worshipful imagery of beautiful women of all shapes, sizes and colors smoking, drinking whiskey or delicately pruning hedges until the camera gently pulls back and reveals some incredibly kinky activities.

https://scache.vevo.com/m/html/embed.html?video=USH5V1522424&playerType=embedded Los Angeles-based quartet Talk in Tongues have developed a reputation both across their hometown and Southern California for a shoegaze/psych rock sound that reportedly draws from Pink Floyd and the Creation Records roster, and […]

Kim Talon of duo Eagle and Talon, just released her debut, self-titled solo effort under the name of JAN via Enclaves Records. The album was produced by John Goodmanson who produced Blonde Redhead, The Gossip, […]

Hailing from the hotbed of indie rock, Austin, TX, Black Forest Fire is one of several psychedelic rock/shoegazer rock from that city. Transit of Venus is the band’s forthcoming album, which Sedimental Records will release on November […]