Founded and led by composer, arranger and producer Seth Applebaum, the New York-based psych rock act Ghost Funk Orchestra initially began as a lo-fi recording project in 2014. Since their formation, the project has grown into full-fledged, 11 member unit that has become an up-and-coming prescience in the city’s psych rock and soul scenes — and that shouldn’t be surprising, as their sound draws from an eclectic array of sources including salsa, surf rock, Afobeat, stoner rock and others.

Slated for an August 23, 2019 release through Colemine Records, the up-and-coming soul acts forthcoming full-length debut, A Song For Paul was conceived as a tribute to Applebaum’s late grandfather Paul Anish, a figure, who played an immense role in the Ghost Funk Orchestra founder and bandleader’s life. While the songs reportedly don’t address Paul Anish directly, the creative process for the album and the decisions made during it were meant to convey what Anish’s presence felt like for Seth — a stern yet loving, native New Yorker. For Applebaum, accurately capturing his grandfather’s essence meant expanding the arrangements much further than what he has done in the past, including crafting more comprehensive horn arrangements, as well as working with a string section for the first time in his career.

A Song For Paul’s latest single “Seven Eight” is an angular and awkwardly lurching song that’s centered around an unusual time signature (7/8 time), a looping Tropicalia-like guitar line, ethereal vocals, an explosive and expressive horn arrangement, which gives the song a quirky yet cinematic air. And while bearing an uncanny resemblance to Radiohead’s “15 Step” and to Gorillaz “5/4,” the song evokes the drunken swoon of having a crush. As the band’s Seth Applebaum explains “Seven Eight is a song about having a crush. When writing the song, we chose an awkward time signature because having a crush will make anyone feel a little awkward.”

Starring Romi Hanoch, the recently released video for “Seven Eight” relies heavily on found footage from old medical films, liquid light projections from Drippy Eye Projections thrown into a visual that has a decidedly film noir-ish feel. “The music video relies heavily on found footage, specifically pulled from old medical films that depict the beauty and chaos of the human body and its internal functions,” Seth Applebaum explains. “In addition, we were fortunate enough to have our friends at Drippy Eye Projections provide us with some incredible liquid light visuals to further the narrative of chemistry.” 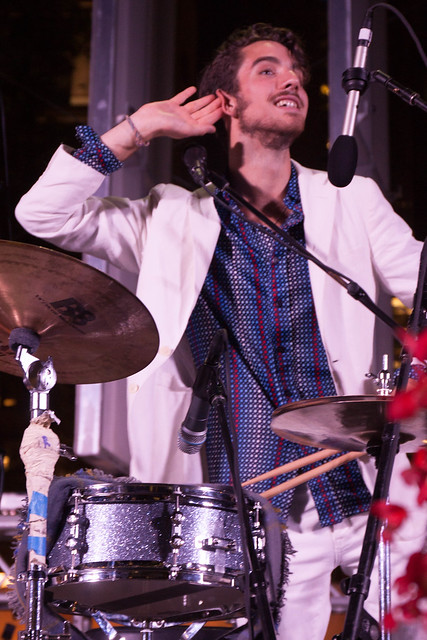 As some of you may know, I embarked on a lengthy 487 day (mostly) Black and White photography project, which I posted here. So for a while I’ve been randomly shooting when I feel the […]