Mitch Bowden is the founder of Mechanical Noise Studio, a recording studio that reportedly sits at the en dog a quiet, winding country road in Dunnville, Ontario, Canada; the sort of road frequently hared with foxes, windmills and little else. He’s also the founding member and creative mastermind behind indie rock act Don Vail — and over the past decade, all of those different identities have blurred into something synonymous for him.

Bowden emerged into the Canadian indie rock scene with the release of his 2009 Jordon Zadorozny-produced, self-titled debut, an effort that deftly paired harmonic warmth and dispassionate math rock riffs. And instead of serving as a launching pad for Bowden’s career and rising profile, he spent the better part of close to a decade, releasing eight songs and playing two shows.  2016’s self-recorded, self-performed effort Fades managed to be a carefully crafted effort that on a certain level revealed the effect that isolation can have on an artist — way too much personal control, mastery of their craft countered by crippling perfectionism and a lack of urgency.

Interestingly, during the spring of 2017, Bowden (and in turn, Don Vail) received a rather fortuitous invitation as a result of the previous year’s Fades — an invitation to record material at Grouse Lodge Studios in Ireland. Of course, there was a major catch: the window to show up and record wasn’t open indefinitely; in fact, Bowden only had a matter of a few weeks to turn sketches and pieces of ideas into fully fleshed songs. And at the time, Bowden realized that the band needed to be more than just him. So he enlisted the assistance of longtime drummer Victor Malang, guitarist Matthew Fleming and keyboardist/vocalist Kori Pop for the recording sessions for the act’s forthcoming third full-length album That Stand of Tide.

The newly-constituted quartet wrote and rehearsed material together — and they all treated the experience at Grouse Lodge as an opportunity not to be wasted. And although the album was finished back at Mechanical Noise Studios in a similar fashion to his previously released material, the trip to Ireland pushed Bowden to get his shit together and finish the album. Reportedly, the album’s 13 songs at points recall Guided by Voices, Jon Biron and Figure 8-era Elliott Smith. While that may be arguable, the album’s latest single “On The Wire is an anthemic bit of fuzzy power pop centered around big and seemingly effortless hooks, and a palpable anxiety and uncertainty; but at its core is an intentionally heartfelt earnestness.

Directed by Mitch Barnes and the band’s Victor Malang, the recently released video for “On The Wire” follows a painfully awkward and incredibly sad sack man, desperately trying to figure himself out and forge his own identity. And as he does so, he fails miserably — at everything. If there’s one thing that he’s good at, it’s his own nerdy awkwardness. Interestingly, the visuals are purposefully lo-fi, and bring to mind classic MTV with a mischievous aplomb.

Keith Fleming is a Portland, OR-based multi-instrumentalist, producer and singer/songwriter, who as a drummer, has had stints touring and recording with The Jonny Cohen Love Machine, John Stabb’s Weatherhead and and others, and for being one-half of highly acclaimed indie rock duo Hemmit, with his longtime collaborator, producer, engineer, songwriter and highly sought-after guitarist Adam Rohosy. Interestingly, Hemmit has had their music featured on MTV, Surfline, Bike TV and have received radio airplay from a number of radio stations across the world; in fact, their fifth album Straight Outta Nowhere saw heavy college radio airplay and attention from critics and fans.

With the six-song EP One Ultra, the long-awaited follow up to their buzz worthy fifth, full-length album, Hemmit has become a solo recording project featuring Keith Fleming, and the EP reportedly consists of indie rock and guitar pop that blends elements of lo-fi garage rock, power pop and 80s synth rock, largely influenced by Ty Segall, Best Coast, Guided by Voices and Sloan; however, the EP’s first single “Friends” sounds as though Fleming was drawing from 90s alt rock — in particular My Vitriol, Blur, Foo Fighters and others, as the song is centered around enormous power chords, a guitar pyrotechnic-fueled solo, thunderous drumming and a rousingly anthemic, arena rock friendly hook. And while swaggering and self-assured, the song is a breakneck, swooning, “you-were-there”-like recollection of youth and youthful passions

The recently released lyric video for “Friends” is essentially a time capsule, featuring found footage of young people over the course of the past 30 years or so, being young and seemingly carefree.

Publicly citing Tears for Fears, The Cure, Spectrum, Guided by Voices, Sympathy Nervous and This Heat as major influences, the Springfield, MO-based synth wave/synth punk duo Kudzu, comprised of Seth Goodwin (vocals, synths, drum programming) and Mark Gillenwaters (vocals, guitar) will be releasing their forthcoming full-length album Defeated on March 2, 2018 through Push & Pull Records. And reportedly, the album’s 9 songs come from several layers of disenchantment and frustration — first with their local punk and DIY scenes, which has resulted in a general dissociation from them and second, the stark reality of life in the Ozarks. As the band’s Mark Gillenwaters explains in press notes “I feel like there is a type of alienation you can harbor in a place like this that lends itself to bleak music. I like to treat lyrics as more emotional than literal, so some lyrics might not make sense but still convey the emotion I’m trying to present.”

“Some Cops,” the latest single off the band’s forthcoming album finds the duo drawing from the likes of Ministry, PIL and early Nine Inch Nails as it features layers of buzzing, analog synths, slashing and buzzing power chords, propulsive yet forceful drum programming and an anthemic hook — and while clearly being mosh pit friendly, the song bristles and snarls with a pent up frustration at its core. 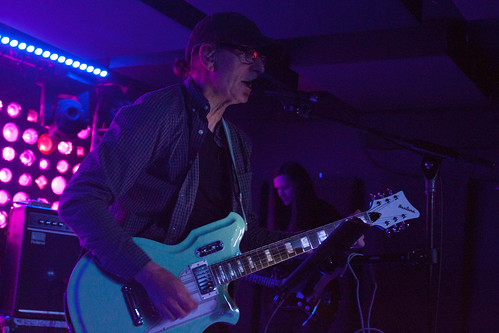 Arguably best known for a stint in Bob Pollard’s Guided by Voices in the 90s,  and for  writing and cowriting some of the band’s most beloved songs off some of their most revered albums, Tobin Sprout has also spent time as a solo artist, who has five previously full-length albums under his belt. Now, as you know the classic 90s Guided By Voices lineup had reunited over the past decade and then split up again with the various members focusing on a variety of creative pursuits — and for Sprout, it meant a renewed focus on his solo career.

The Universe and Me, Sprout’s sixth full-length, solo effort is slated for a February 3, 2017 release through renowned indie label Burger Records and the album reportedly focuses on the search for one’s place in the cosmos — and how the acceptance of aging makes such a search desperate and urgent. Additionally, material on the album focuses on maintaining a childlike curiosity and wonder. In fact, much of the material is the result of a seven-year “gestation” period that included Sprout unearthing lost recordings and demos and digging through his boyhood memories from his Michigan home studio where he had recorded the material, live with his new backing band, capturing a first thought, best thought kind of recording sessions. In fact, through the sessions Sprout and company focused on feeling — instead of production.

Interestingly, The Universe and Me‘s first single “Future Boy Today/Man of Tomorrow” was an unearthed recording that was initially written and intended for Guided By Voices — and in many ways while sounding as though it should have (and could have) been a great B side, the song captures a childhood obsession with comics and superheroes and the uncertain transition to adulthood, complete with the bitter acceptance of uneasy compromises while you try to find a purpose for your life — but with a sly winking sense of humor that belies the grungy and super serious, 90s alt rock sound.

Comprised of founding members Erin Jenkins and Mathieu Blanchard and recent recruits Chris Dadge (bass), who has had stints in Lab Coast, Alvvays and Chad VanGaalen‘s backing band; and renowned singer/songwriter and guitarist Samantha Savage Smith joining a guitarist, Canadian band Crystal Eyes can trace their origins to the melancholic dream pop the duo wrote while nomadically bouncing back and forth between Tofino, British Columbia and Halifax, Nova Scotia — dream pop that the band’s founding duo has claimed has drawn from Francoise Hardy, Guided by Voices.  As a relatively constituted quartet, the band has continued to tour across their native Canada, including consecutive appearances at Pop Montreal.

The band’s latest effort The Female Imagination was written while the band spent time on a lake island in rural Ontario and was recorded on a Tascam 388. And according to the band, the album thematically focuses on and explores the other side of ourselves that we can never quite seem tor reach. The album’s latest single “Already Gone” consists dreamy and ethereal harmonies with layers of shimmering guitars played through copious amounts of reverb and delay pedal and a persistent, driving rhythm and in some way, the song sounds as though it were equally influenced by 60s garage psych — i.e., much like contemporary acts like Raccoon Fighter, The Black Angels, early Dum Dum Girls, Death Valley Girls and countless others but with a moody and sensual feel.

Initially, the Boston, MA-based indie rock trio halfsour began as a Guided By Voices cover band before they started writing their own original material. And as you’ll hear on “ik,” the latest single (and video) […]

Comprised of Jacob Morrell (guitarist), Mike Shaw (vocals and bass) and Mike’s brother Jack (drums), the Atlanta-based indie rock trio The Head can trace their origins to when the members of the band were in […]

Although they’ve gone through a number of lineup changes since their initial formation in 1989, The Charlatans (known Stateside as The Charlatans UK) currently comprised of Tim Burgess (vocals), Mark Collins (guitar),  Martin Blunt (bass), and […]

Robert Pollard, the creative force behind the Dayton, OH-based cult-favorite band Guided by Voices has long been considered one of the more prolific songwriters and musicians in indie rock. Largely influenced by garage rock, psych […]