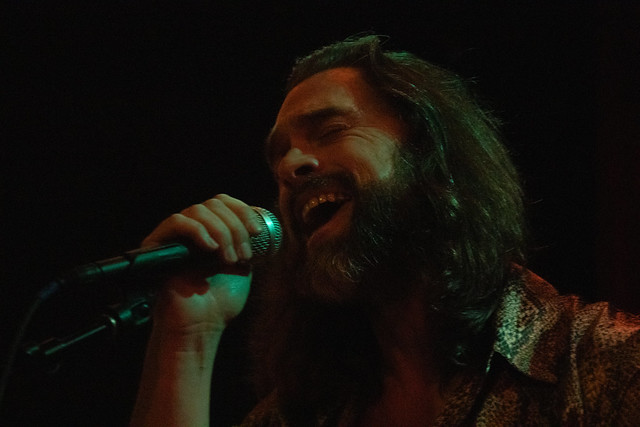 With the 2015 release of their excellent, sophomore effort Manual, the Brazilian psych rock quartet Boogarins received attention internationally and the band quickly became a JOVM mainstay artist for a decidedly Brazilian take on psych rock as their work has drawn from their country’s incredibly rich and diverse musical and cultural history — with lyrics completely written and sung in Brazilian Portuguese, making them among the forefront of an burgeoning Brazilian rock renaissance.

During a busy run of international touring, the Latin Grammy-nominated act holed up in house near Austin, TX‘s SPACE Studios for most of the summer, and they spent their time writing and recording new material in between a several weeks- long Austin club residency, which included the recently released  “Elogio a Instituição do Cinismo,” a single that’s a decided sonic departure as the band incorporated thumping beats and backbeats, swirling electronics and abrasive and buzzing guitars to create a malevolently brewing storm of sound that evoked both a fucked up hallucination and a rowdy, dance-floor friendly stomp.

Live Concert: Photography: Northside Festival 2015 As you know, a couple of weeks ago, my dear friend and colleague Natalie Hamingson and I were busily covering the Northside Festival, a festival that has over the […]

Founded by sibling duo Scott and Danny Stedman, the Northside Festival started under rather humble beginnings as an offshoot of The L Magazine from their one-bedroom apartment. But over the last few years, the festival […]