Wray is a critically applauded Birmingham, AL-based indie trio — David Bown (bass, vocals), David Swatzell (guitar, vocals) and Blake Wimberly (drums)  — that can trace its origins to its members’ shared decade-plus history in Birmingham’s indie and underground scenes. Interestingly, with the act’s first two albums — 2014’s self-titled debut and 2016’s Lynn Bridges and Wray co-produced sophomore album Hypatia, the Birmingham-based trio received praise from the likes of The New York Times and Mojo for their adventurous, genre-defying sound and approach. Adding to a growing profile, they’ve also made appearances on MTVu and Daytrotter.

Slated for a June 5, 2020 release through their longtime label home Communicating Vessels Records, the band’s long-awaited, self-produced dual record Stream of Youth/Blank World thematically is an exploration of personal dichotomies: hope and pessimism, wildness and composure, joy and pain. Recorded at Communicating Vessels Birmingham area studio, the band experimented, wrote, revised and recorded the material at their own pace. Sonically, the material further establishes the band’s reputation for crafting a shimmering New Wave-like take on shoegaze that seems indebted to NEU!, Faust, Can, Slowdive, My Bloody Valentine, and even The Cure.

“Jogging/Neon Forming,” Stream of Youth/Blank World’s brooding and cinematic latest single is a perfect example of the sound that has won them acclaim: centered around a motorik groove, shimmering synth arpeggios, plaintive vocals and a rousingly anthemic hook, the song feels like an ethereal yet lingering fever dream. At its core is an achingly wistful nostalgia for a past that we simply can’t get back — and considering the current state of the world, the song’s overall feel and vibe feels powerfully relevant.

Created by Barbara Baron, the recently released video for “Jogging/Neon Forming” was hot on a grainy VHS-like tape and features a lonely woman in a laundromat and briefly in a park — and throughout there’s a sense of loss.

Early James is a Birmingham, AL-based singer/songwriter, guitarist and frontman of the Birmingham-based act Early James and The Latest. Along with bandmates James Mullis and Adrian Marmolejo, the act seamlessly meshes roots rock, the blues, early rock and classic country.  The band is Dan Auerbach’s latest singing to his Easy Eye Sound Records — and as the story goes, Auerbach decided he needed to produce James’ work after watching roughly two seconds of the Birmingham-based singer/songwriter and guitarist performing. “Every line has to mean something to him, personally. It’s not good enough to just write a good song, it needs to have a deeper meaning,” Auerbach says of working with James. “He’s unlike any person I’ve ever worked with. He’s not writing a song to be universal; he’s writing a song for him.”

Singing for My Supper, Early James’ full-length debut is slated for a March 13, 2020 release through Easy Eye Sound/Nonesuch Records.  Reportedly, the Dan Auberach and David “Fergie” Ferguson-produced debut features ten-wide ranging songs that span across blues, folk and old-timey pop crooning that are influenced by Fiona Apple, Tom Waits and the Southern Gothic poets — while being deeply personal, full of world weary wisdom and informed by lived-in experience.

Singing for My Supper’s second and latest single “It Doesn’t Matter Now” tells a tale of a bitter breakup of a dramatic and dysfunctional relationship with recriminations and accusations and deliberately hurtful actions coming from both sides. Musically, the song is centered around a cinematic and brooding Chris Issak “Wicked Game” meets Mississippi Delta Blues arrangement — reverb drenched guitars, gently padded drumming, a sinuous bass line and James’ incredible vocals, which express the heartbreak, bitterness, pride, longing and ambivalence at the core of the song.

Directed by Tim Hardman, the recently released video is a Southern Gothic-influenced visual that recalls Deliverance, A Time to Kill and others, as it stars James, his backing band and a collection of sideshow freaks and primarily set in and around a creepily beaten up cabin in the middle of nowhere. But the video’s protagonist are the sideshow freak couple, who inflict pain on each other — and gleefully enjoy it. “The subject matter for this song is pretty heavy. I felt there needed to be some aggression on screen but didn’t want it to play out like a typical break up,” Hardman told Billboard. “For some reason, Sideshow Bennie, whom I worked with several years ago, popped in my head. I looked him up and learned he was now working with a sidekick, Anna Fiametta. When I read how they met, I thought it was a funny story that would fit the song. The thought of them inflicting pain on each other, and the pleasure they receive from it, was intriguing. I pitched the idea to Early and I’m grateful he got it and trusted my vision for his song.”

Comprised of founding members, Birmingham, AL-born, Minneapolis, MN-based frontwoman and primary songwriter Kerry Alexander (vocals, guitar) and Minneapolis, MN-born and -based Chris Hoge (drums) with Noah Boswell (bass), the Minneapolis, MN-based indie rock trio Bad Bad Hats can trace their origins to when Alexander, Hoge and Boswell all met while attending Macalester College in nearby Saint Paul. Alexander and Hoge began writing songs together in 2010, recording a collection of demos that would eventually comprise their debut EP. Their friend Boswell was later recruited to solidify their lineup, and the band quickly caught the attention of local indie label Afternoon Records, a label that has released albums by Yellow Ostrich, Now Now, Haley Bonar, One for the Team and others, as well as the band’s debut EP and their incredibly self-assured Brett Buillion-produced full-length debut Psychic Reader.

The band’s highly-anticipated and soon-to-be released sophomore album Lighting Round not only finds the band continuing their collaboration with producer Brett Bullion, who encouraged the band to record live to tape, which not only gives the material a you-were-there-in-the-room urgency and spontaneity, but emphasizes that living, breathing, vulnerable humans created, played and recorded the material; in fact, the spontaneous approach allows little room for the prototypical overthinking and perfectionism of modern recording,  and as result, there are some minor mistakes — some wrong notes being played, maybe someone being slightly off key and so on. Of course, that’s meant to add to material’s honesty and vulnerability, as thematically its centered on dependence and independence within relationships. “Nothing Gets Me High,” the album’s latest single finds the Minneapolis trio meshing shimmering hook-driven New Wave-like pop with jangling guitar pop — and while giving their sound a clean polish, the point remains the song’s swooning, emotional heft, as the song focuses on two ironically related sensations — the all-encompassing pangs of first (or new) love, and the desire to bring about that feeling for someone else. And much like new love, it’s initially a little uncertain and a little unsure before it becomes a palpable ache.

Directed by Dan Stewart, the recently released super stylistic video features the members of the band playing the song in a studio — but from the perspective of someone watching a music video someplace else with TVs with fucked up color controls, further emphasizing the song’s initial sense of uncertain yet desperate longing. 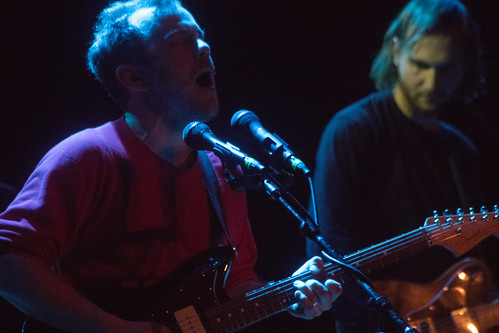 Initially formed in 1971 and comprised of Werner “Zappi” Deirmaier, Hans Joachim Irmler, Arnulf  Meifert,  Jean-Hervé Péron, Rudolf Sosna and Gunther Wüsthoff, German sextet Faust developed an internationally recognized reputation for a sound and aesthetic that proudly defied genre conventions and expectations — and perhaps most important as being pioneers of a sound that critics have since dubbed krautrock. Adding to their reputation of pioneering a new sound and eventually a new genre, the German band was one of the first acts to sign with Richard Branson‘s Virgin Records. And as the story goes, after Virgin Records rejected what was slated to be the band’s fifth full-length effort, the band broke up — with the individual members of the band largely disappearing from the public. Other than a handful of shows sometime in the 80s and the release of Patchwork, a compilation of outtakes, which featured three pieces the band recorded in the early 80s, the band’s whereabouts and what they were even up to were shrouded in mystery until the trio of Irmler, Diermaier and Péron began performing reunion shows in the early 1990s.  But despite the questions regarding Faust’s whereabouts, the band’s recorded output maintained a level of interest and curiosity among krautrock fans and newer fans as Recommended Records reissued and re-released their four full-length efforts, as well as releasing unreleased material and a variety of compilations.

Interestingly, since their reunion in the early 1990s, the band has managed to be remarkably prolific, although they’ve managed to record and tour with a variety of different lineups and members with the most recent effort being 2010’s Faust Is Last.

“Jennifer,” off their fourth and aptly titled album Faust IV is a song that defies conventional songwriting and structure at every single turn. The song eschews the familiar format of verse, chorus, verse, chorus, bridge, coda for a series of distinct movements held together with a propulsive rhythm section. And as you listen to the song, you’ll hear a band that tackles minimalist drone and noise rock, jazz fusion and creaky, old-timey vaudeville with an unexpected turn of a musical phrase to create something that’s mind-bendingly trippy and unexpected.

Although the Birmingham, AL-based trio Wray formed a little over two years ago, the individual members of the band, David Brown (bass and vocals), Blake Wimberly (drums) and David Swatzell (guitar) have been mainstays in their local music scene, performing in a number of musical projects including Last Flight In, Comrade, Waterfall and several others. However, Wray has been a sonic departure from Brown’s, Wimberly’s and Swatzell’s previous work as the trio have developed a national profile for a textured, atmospheric shoegazer rock sound; in fact, the band’s debut effort was released to critical praise from media outlets such as The New York Times and MOJO — and they made appearances on MTVu and Daytrotter.

The members of the Birmingham AL-based trio have spent the past year writing, revising and then recording the material that would eventually comprise their soon-to-be released and highly-anticipated sophomore effort, Hypatia, which the renowned and eclectic Birmingham, AL-based indie label Communicating Vessels Records will release on January 15, 2016. Co-produced by the band and Lynn Bridges, who has worked with Jack Oblivian, Devendra Banhart and Dan Sartain, the album reportedly has the band making what they believe is their most cohesive effort yet with the material fitting into a particular mood as the band explored subtle contrasts.

Hypatia‘s latest single coincidentally is a somewhat stripped down cover of Faust’s “Jennifer” that turns the expansive and structure defying song into a slow-burning, minimalist and shoegazey meditation on the Jennifer that the song’s narrator seems to adore; however, Wray’s cover managed to possess a wistful, melancholic feel, as though Jennifer has become part of the narrator’s past that they can never get back.

Check out how Wray’s cover stands up against Faust’s original below.

Comprised of Scotty Lee (vocals, guitar), Byron Sonnier (bass) and Mike Beasley (drums). the Birmingham, AL-based trio \\GT// has gone through several iterations since its founding member Lee started the project as a sort of […]

If you’ve been following JOVM for some time, you may be somewhat familiar with the Birmingham, AL-based label, Communicating Vessels. Founded by Jeffery Cain, once a member of the sadly unheralded band Remy Zemo, Communicating […]

Although the Birmingham, AL-based trio of David Brown, Blake Wimberly and David Swatzell’s latest project, Wray is a relatively new project, each of the members of the band have been mainstays in Birmingham’s music scene, […]

Now based in Birmingham, AL, producer and singer/songwriter Armand Margjeka originally grew up in communist Albania, and although his native country’s regime was brutally oppressive, a young Margjeka grew up on American music — in […]