Stone Camillo is a 20 something, Buffalo-based singer/songwriter, multi-instrumentalist and creative mastermind behind the emerging psych pop project Diamond Revolver. Camillo started Diamond Revolver when he was just 15 — and since then, he has been prolific, releasing a steady stream of psych-inspired material centered around big hooks and trippy atmospherics. He is also frontman of Ancient Spaceship.

Camillo’s latest single “Diving” is the second single off his forthcoming Diamond Revolver debut. Centered around reverb-drenched keys, blown-out beats, jazz-like drumming and buzzing synths paired with Camillo’s dreamy delivery, “Diving” is a syrupy, slow-burner that evokes the sensation of tripping on hallucinogens while sonically nodding at Pink Floyd and Tame Impala.

Led by frontwoman Irene Rehviashvilli, the Buffalo-based quartet Alpha Hopper formed back in 2014. And since their formation, the Buffalo-based act have developed and honed a frenetic guitar-driven rock sound featuring elements of punk rock, hardcore, noise rock and no-wave.

As a result of pandemic-related shutdowns and restrictions, the members of the Buffalo-based quartet decided to record the album themselves in their homes. Of course, because of shelter-in-place recommendations, there were some hiccups in the recording process: instead of being able to track material in a single block, they ere conducted in intervals when the members were able to safely get together to hash out their respective parts. Once they were satisfied with the mix, they sent the files to John Angelo to master the material.

Alpha Hex Index’s latest single “Enskin” is a breakneck and feral ripper, centered around angular power chords, Rehviashvilli’s snotty and bratty delivery, rapid-fire drumming and enormous mosh pit friendly hooks. And while sonically recalling a wild synthesis of Fever to Tell Yeah Yeah Yeahs and math rock titans Cinemechanica, the song lyrically is a call for the listener to armor themselves with the protective hides of creatures and the head and heart of their own spirit.

The recently released video for “Enskin” is a collaborative video created by Tbilisi, Georgia-based wearable sculpture collaborators UTA and virtual reality filmmaker Flatsitter. Directly inspired by the song’s lyrics, the video features characters running around a distinctly European town in wild and colorful costumes — and throughout the video, each character seems imbued with supernatural powers.

Born in Buffalo, NY, the highly influential and forward-thinking electronic music producer and artist Patrick Cowley relocated to San Francisco in 1971 to study electronic music at the City College of San Francisco. By the late 70s, Cowley’s synthesizer and production techniques landed him a gig writing and producing songs for legendary, gender-bending disco superstar Sylvester, including the sultry and propulsive, smash hit “You Make Me Feel (Mighty Real).”

Around the same time, Cowley managed to create his own brand of party music, known as Hi-NRG, which was also dubbed “The San Francisco Sound” and by 1981, he had released a string of 12″ singles as a solo artist, including “Menergy” and “Megatron Man.” Interestingly, 1981 was an incredibly busy year for the legendary electronic music producer and artist: he co-founded Megatone Records, which released his debut album Megatron Man.

During that same year, Cowley as hospitalized and diagnosed with an unknown illness. which would later become known as AIDS. Recovering for a brief spell he went on to produce Sylvester’s smash hit “Do You Want to Funk” and Paul Parker’s “Right on Target,” as well as his sophomore album Mind Warp. Tragically. Cowley died two weeks after his 32nd birthday from an AIDS-related illness.  Since his death, Patrick Cowley has become one of electronic music’s most influential and forward-thinking artists and producers.  Perhaps unsurprisingly, his previously released work has seen posthumous re-issues, including a re-issue of Mind Warp a few years ago.

With growing attention on the late electronic music pioneer’s work, a collection of previously unreleased material written between 1973-1980 was recently discovered. Dubbed Mechanical Fantasy Box, the 13 previous unreleased songs will be released in tandem with Cowley’s homoerotic journal of the same name, and the compilation is a collection of Cowley’s work from the years preceding his meteoric rise as a pioneer of Hi-NRG dance music. Interestingly, these songs were written and recorded  before drum machines and programmable, polyphonic digital synthesis with the material being highly experimental. Sonically, the material flows from funk to kraut to psychedelic, ambient electronics inspired by Tomita and Kraftwerk.

Some songs were mixed from 4-track stems by Joe Tarantino and all of the compilation’s 13 songs have been remastered by George Horn at Fantasy Studios in Berkeley, CA. The vinyl edition comes housed in a black and white gatefold jacket Gwenaël Rattke featuring a photograph by Susan Middleton, liner notes by bandmate Maurice Tani and an 8.5×11 insert with notes. But more important, proceeds from the compilation will be donated to the San Francisco AIDS Foundation. The San Francisco AIDS Foundation has been committed to ending the pandemic and human suffering caused by HIV sine 1982.

Clocking in at just a smidge under 11:30, Mechanical Fantasy Box’s first single “Lumberjacks in Heat” manages to be a trippy synthesis of John Carpenter soundtracks krautrock-inspired prog rock and psychedelia as the composition is centered by layers of shimmering and fluttering bursts of synths and some propulsive and forceful drumming.   Interestingly, much like Kraftwerk’s legendary and influential work, this previously unreleased single manages to simultaneously be of its time and remarkably contemporary — as though it could have been part of the retro-futuristic wave. 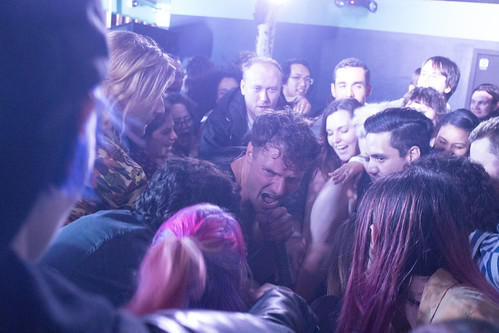 Cooler is a Buffalo, NY-based indie rock quintet, comprised of Alley Yates (guitar, vocals), Nathan McDorman (guitar, vocals), Nick Sessanna (drums, vocals) and Adam Cwynar (bass) whose sound and aesthetic draws from 90s grunge and early 00s emo and as a result their sound has been compared favorably to the likes of Weezer, Saves the Day and Pity Sex — although as you’ll hear on “Metal Moths,” the latest single off their recently released Phantom Phuzz EP, their sound reminds me quite a bit of Bleeding Rainbow and Silversun Pickups as the members of the Buffalo-based quintet specialize in pairing layers of fuzzy power chords with anthemic hooks, a special attention on harmonized vocals singing incredibly earnest lyrics. Listening to the track brought back memories of making mixtapes

Brat’ya is the brainchild of Azerbaijani-born and Buffalo, NY based electronic music artist and producer Alek Ogadzhanov. “Call Me,” the title track and first single off Brat’ya’s forthcoming Call Me EP reveals that the Azerbaijani-born, Buffalo, NY-based producer and artist specializes in a retro-futurtistc sound that some have initially compared to contemporary electro pop artists such as Metronomy, Chromeo and Miami Horror — although to my ears I’m immediately reminded of Yaz‘s “Situation” as the song pairs cascading layers of shimmering synths, a propulsive motorik-like groove and falsetto vocals singing lyrics about waiting for a potential significant other/significant other to show interest in you — with the song’s narrator lamenting over the fact that he has no idea if or when his significant other will reach out and why it’s taking so long.

Comprised of Joe White (bass), Justin Acee (drums) and Rob Romano (guitar), the trio of longtime friends within Buffalo, NY-based trio of Made Violent have had a breakthrough 18 months or year or so, as they’ve received attention across […]

Comprised of Matt McGurn and Don Skotnicki, the Buffalo-based duo of Solidisco have won the attention of the blogosphere for remixes of The Knocks, Mystery Skulls, Icona Pop, as well as original material such as […]

If you’ve been following JOVM for the past year or so, you may have come across a couple of posts on the Buffalo, NY-based band Made Violent. The members of the band – Joe White (bass), Justin Acee (drums) […]