Julia Anrather is a New York-born and-based singer/songwriter and pop artist, who can trace the origins of her music career to when she began studying music as a small child. Anrather posted her first singles on Soundcloud back in 2015, where they caught the attention of Refinery29, who wrote “if we had things our way, she’d serenade us . . . every night . . . give us more, please.” By the following year, Anrather released her debut EP, 2016’s Quentin, which featured “Closer,” a track that premiered on Impose Magazine and was later included on their Week in Pop and Year in Pop compilations. The music video for “Closer,” which was made with long-time collaborator Luke Slattery premiered at Indiecurrent and went on to win Best Music Video at NYC Indie Film Fest and Coney Island Film Festival — and the video went on to screen at festivals across the States and European Union. Building upon a growing profile, Curtis Alto remixed Closer and was featured on the EDM act’s single “You Might” and its remix, which charted on Belgian radio while amassing over 500,000 Spotify streams.

The rapidly rising New York-based singer/songwriter and pop artist has spent the past two years writing and recording new material produced by Benjamin Julia and Ryan Dieringer and featuring collaborations with Grand Kid‘s Dan Kleederman, Alex D. Goldberg, L’Rain’s Taja Cheek, Vishal Nayak, Kyle Miles, Katie Jacoby, Puck‘s Kaley Puckett and JOVM mainstay Nick Hakim. Anrather’s latest single is the slow-burning and sultry “Dorothy.” Centered around a squiggly and shimmering synth arpeggio line played by Taja Cheek, a bluesy guitar line, a simple back beat, and Anrather’s soulful and tender vocals, the song evokes the swoon and ache of head-over-heels infatuation and crash and burn intimacy suddenly and inexplicably blowing up in your face. The song reveals a singer/songwriter, who can express an unvarnished vulnerability with a character that subtly subverts traditional gender roles and dynamics  — while drawing from Quiet Storm-like soul and Nick Hakim-like dusty atmospherics. “‘Dorothy’ is about being romantic in a  culture that recently invented the term ‘ghosting,'” Anrather explains in press notes.

“I was listening to a lot of Masseducation and Anti when we were working on this tune, so while both I and my co-producer Ryan Dieringer thought we were making an indie rock record, the sound I was looking for wound up being new territory for the both of us,” the New York-born and based singer/songwriter and pop artist says of the song’s creation.” We wound up making hundreds of drafts of the track, but because it didn’t come easy, ‘Dorothy’ represents a really full and specific collaboration between the two of us, which I’m grateful for. A moment that came very easily though was when Taja came by to record synths. I think we’d scheduled 4 hours with her, but she shows up, decides to play around with the DX7, it turned out the DX7 was broken but she forges ahead, builds a patch that we can’t recreate unless we break the DX7 again and then plays that wailing synth line that is now my favorite part of the song. I think we were done in an hour and then just ate dinner, it was ideal.

Dorothy Parker got involved when we heard a recording of her reading her poem ‘One Perfect Rose’ and decided that her voice with that eerie 1950s affect and that poem–about tired romantic tropes–made her the perfect hype woman for this song. (A sidebar is that I had to license the recording from the NAACP because she left her estate to Martin Luther King Jr. and, when he was assassinated, it went to the NAACP. I didn’t think anything could make me like Dorothy Parker more but this info definitely did.)

Earlier this month, I caught the Brooklyn-based alt rock duo Deaf Poets play on a bill featuring Chicago-based post-punk act Ganser and the Brooklyn-based New Wave act Winkie at Saint Vitus, and as you may recall, the up-and-coming rock duo, comprised of Miami Beach, FL-born, New York-based duo of Sean Wouters (vocals, guitar) and Nico Espinosa (vocals, percussion) can trace their origins to when they met in elementary school. During high school, Wouters and Espinosa went through a long process of musical experimentation, which ultimately led to their founding of Deaf Poets — and since their formation, the Miami Beach-born, New York-based duo have received attention for a sound that effortlessly meshes elements of 70s rock with 80s punk and 90s grunge.

While in their hometown, the duo cemented a place in South Florida’s indie scene, playing some of the area’s best known venues, including Churchill’s, Bardot, Gramps and Grand Central, ultimately being named “Best Band of Miami” in 2014 and one of the “20 Most Influential People of Miami” in 2015 by The Miami New Times. Adding to a growing profile, “Degenerate Mind” off their debut album 4150 was part of the Tony Hawk Pro Skater 5 video game soundtrack and was featured as part of Classic Rock Magazine‘s 2014 compilation CD. Along with that, the duo became a regular presence at iiiPoints Festival, where they played four consecutive years on bills that have included Mac DeMarco and Unknown Mortal Orchestra. Additionally, they’ve opened for Matt and Kim and shared stages with Andy Rourke, The Ettes, Pujol, Jennie Vee, The Peach Kings, The Psychedelic Furs, The Growlers, and Dorothy.

Like countless hungry bands before them, the members of Deaf Poets recently relocated to New York, and unsurprisingly, their soon-to-be released EP Change & Bloom is reportedly inspired by the events and personal experiences that have transpired before and during their move, arguably making it one of the more personal and honest efforts of their young and growing catalog — and while the EP will further cement their reputation for swaggering crafting hard-hitting, power chord-based, arena rock, the EP’s latest single “Cigarette,” features a moody and expansive alternating quiet, loud, quiet  song structure centered around effortless time signature changes, tribal-influenced drumming and some impressive and forceful guitar pyrotechnics, revealing an ambitious band experimenting with both their sound and songwriting. 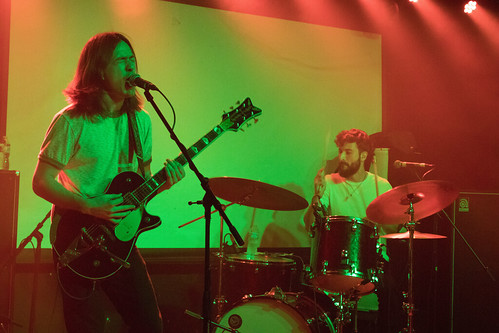 Over the past 18 months or so, the Los Angeles-based quartet of Dorothy, named after their founding member and vocalist have become JOVM mainstays and have won national attention for a sound that possesses elements of riff-heavy […]

The Los Angeles-based quartet of Dorothy, named after their founder and lead vocalist have become blogosphere sensations for a sound that employs elements of riff-heavy 60s and 70s rock, the blues, glam rock, hip hop […]

If you’ve followed this site over the last few months, you would know that I’ve written about the Los Angeles, CA-based  quartet Dorothy, named after their founder and lead vocalist. And with the release of their first […]

Appropriately named after their lead vocalist, Dorothy, is Los Angeles, CA-based quartet, which consists of Dorothy (vocals), Mark Jackson (guitar), Greg (bass). and Zac Morris (drums). And in a relatively short time, they’ve received quite a bit of attention […]

Named after their lead vocalist, Dorothy, the Los Angeles, CA-based quartet, which consists of Dorothy, Mark Jackson (guitar), Eliot Lorango (bass). and Zac Morris (drums) has a sound that employs elements of riff-heavy 60s and […]