Playing professionally since he was 11, King was discovered after a video of him performing at Norman’s Rare Guitars went viral. Now 23, King  has been performing for the past 15 years, establishing himself as a  world class guitarist, vocalist and highly sought-after session player.

Since 2015, King has been relentlessly touring with his backing band The Marcus King Band — Jack Ryan (drums), Stephen Campbell (bass), Justin Johnson (trumpet, trombone) and Dean Mitchell (sax, still guitar) — playing 140 dates live shows over the course of the past year. Adding to a breakthrough year, King and his backing band have played on The Late Show with Stephen Colbert, made his debut at The Grand Ole Opry — and he recently opened for Chris Stapleton during his last US arena tour, playing in front of 17,000 people every night.

Building upon a rapidly rising profile, King’s highly-anticipated, Dan Auerbach-produced full-length debut El Dorado is slated for a January 17, 2020 release through Fantasy Recordings. King’s full-length debut continues on the success of his first collaboration with Auerbach, “How Long,” with the album being co-written with the acclaimed singer/songwriter, guitarist and producer over three days at his Easy Eye Sound studio — and reportedly, the album is a contemporary sonic exploration of classic rock, blues, southern R&B and country soul.

“Marcus is known by so many as a phenom guitar player, and rightfully so,” Dan Auerbach says of his time working with Marcus King. “He’s regularly the best player in the room, hands down. I was equally blown away by the way he can sing — so effortless, so soulful, straight to the heart. He’s a naturally gifted writer too, which was clear right away. Everything for him is so innate — that’s why he can always go right to the heart of a song and connect in a deeper way. He’s really one of a king and I’m proud I got to work alongside him on this record.”

“Wildflowers and Wine,” El Dorado‘s second single was a slow-burning track that was one-part Muscle Shoals soul, one part Southern rock, one-part R&B and one-part classic blues centered around a lush arrangement of twinkling keys, a soulful backing vocal section and a sinuous bass pair line paired with King’s vocals. And while being clearly indebted to 70s AM radio, the song manages to be a carefully crafted and self-assured bit of soulful pop, which manages to belie King’s relative youth while being a perfect vehicle for a his blues-tinged guitar work and his exceptional and effortlessly soulful vocals. “Say You Will,” the album’s third single is a slickly produced, arena rock friendly blues number with an enormous hook, which immediately brought Slowhand-era Eric Clapton and Texas Flood-era Stevie Ray Vaughan to mind.

“One Day She’s Here” the fourth and latest single off the Greenville-born, Nashville-based singer/songwriter and guitarist’s highly anticipated full-length debut, is a gorgeous and sultry song that sounds deeply indebted to Curtis Mayfield and 70s Motown, complete with a soaring string arrangement, layers of propulsive percussion, shimmering Rhodes piano and guitar,  an enormous hook and King’s effortlessly soulful vocals. Much like its predecessors, El Dorado’s latest single continues a run of remarkably self-assured and crafted material that belie its creators relative youth. But perhaps more important, the album’s material reveals a budding superstar in the making.

Formed back in 2005, the New York-based rock/punk act Baby Shakes, comprised of Mary  (lead vocals), Judy (guitar, vocals), Claudia (bass, vocals) and Ryan (drums) have released a handful of one-off singles, a singles compilation, a 10 inch heart-shaped vinyl EP and three full-length albums that have firmly established their sound –a sound that generally draws from Ramones, Chuck Berry, 60s Motown-era girl groups with melodic vocals, fuzzy and distorted power chords and enormous hooks within breakneck songs. And building upon a growing profile, the members of the band have toured across the US, Japan, China, Ireland, the UK and the European Union and shared stages with The Romantics, The Boys, The Shadows of Knight, The Undertones, The Barracudas, Protex, Black Lips, Paul Collins’ Beat, Iggy Pop and a growing list of others.

Baby Shakes’ fourth album Cause a Scene is slated for a Friday release, and as you may recall, the album is reportedly inspired by and indebted to the original wave of punk— in particular, The Nerves, The Kids, early Bangles and The Go-Gos, The Runaways, as well as the Ramones. Cause a Scene’s first single “Nowhere Fast,” was a breakneck bit of fuzzy, old school punk paired with an infectious, power pop hook, making the song a sort of seamless synthesis of Ramones and The Go-Gos. “Love Song In Reverse” continued in a similar vein — fuzzy and distorted power chords and enormous, infectious hooks. Interestingly, the album’s latest single, album title track “Cause a Scene” is a straightforward, old-school garage rock track that sounds indebted to Sweet’s
“The Ballroom Blitz” and T. Rex, as the track is centered around 12 bar blues-like guitar riffs, enormous hooks — and a pop-leaning infectiousness just underneath the grit and sleaze. (After all, the song is about two of rock’s greatest, undying tropes — how awesome being in a band is and shaking your ass to a great song.)

Co-directed by Scott Mason and Claudia de Latour, the recently released video for “Cause a Scene” is an old-school-styled campy romp around New York that follows the members of the band as Godzilla-sized characters bringing rock ‘n’ roll grooves to any and all comers. as well as some mayhem, too.

Earlier this year, I wrote about the New York-based rock/punk act Baby Shakes.  The act, which is currently comprised of Mary  (lead vocals), Judy (guitar, vocals), Claudia (bass, vocals) and Ryan (drums) was formed back in 2005. And since their formation, they’ve released a handful of one-off singles, a singles compilation, a 10 inch heart-shaped EP and three albums that have firmly established their sound and aesthetic — a sound that generally draws from Ramones, Chuck Berry, 60s Motown-era girl groups with melodic vocals, fuzzy and distorted power chords and enormous hooks within breakneck songs.

The members of the band have toured across the US, Japan, China, Ireland, the UK and the European Union and shared stages with the likes of The Romantics, The Boys, The Shadows of Knight, The Undertones, The Barracudas, Protex, Black Lips, Paul Collins’ Beat, Iggy Pop and a growing list of others. Now, as you may recall, Baby Shakes’ latest effort Cause a Scene is slated for release next week, and the album is reportedly inspired by and indebted to the original wave of punk — in particular, The Nerves, The Kids, early Bangles and The Go-Gos, The Runaways, as well as the Ramones.

“Nowhere Fast,” the album’s first single was a breakneck bit of fuzzy, old school punk with an infectious power pop-like hook that reminded me of a seamless synthesis of Ramones and The Go-Gos. The album’s second single,  “Love Song In Reverse” continues in a similar vein as its predecessor: it’s all fuzzy and distorted power chords and enormous hooks. And while clocking in at a little over two minutes — roughly 2:25 in this case — the song manages to be an infectious mixture of sugary sweet pop confection and sleazy barroom rock.

Growing up listening to an eclectic variety of music including Patti Labelle, Jill Scott, Bob James, Stevie Wonder, D’Angelo, Bjork and The Black Crowes among others, up-and-coming, Edmonton, AB-born, Toronto, ON-based soul artist Tanika Charles quickly developed a reputation locally as an emerging solo artist, whose puts a modern spin on the classic Motown soul sound — frequently meshing it with swaggering, hip-hop-like beats and deeply, confessional and honest lyrics, reminiscent of Mary J. Blige, Kelis and others. And as a result, within Canada’s soul scene, Charles has largely been considered her country’s next big thing; in fact, interestingly enough, over the past couple of years Charles transformed from being an emerging solo artist to being a commanding performer and bandleader, as well as one of the scene’s staples. Adding to a growing national profile, Charles has collaborated with Estelle, Lauryn Hill and Macy Gray, and has made regular appearances on CTV, Global and CBC Radio.

Produced by Slakah the Beatchild, best known for collaborating with Drake, Charles’ latest single “Soul Run” is the first single off her self-titled, full-length album, slated for an April 7, 2017 release through Italian soul label, Record Kicks, and the single will further cement the Edmonton-born, Toronto-based singer/songwriter’s burgeoning reputation for crafting confessional lyrics based around her own personal experiences with “Soul Run” based around Charles’ experience of feeling trapped in an emotionally abusive relationship in rural Canada — until she decided to “borrow” her then fiancée’s car and left for Toronto to start her music career, never looking back. Considering the personal nature of the song, Charles as the song’s narrator expresses regret over her own foolishness that wound up with her being hopelessly trapped in an abusive and fucked up relationship and desperate desire to get away and start over. You can almost picture Charles, jumping into the car with whatever possessions she could manage and hitting the road without an idea of where she was going or what would happen — and yet feeling true freedom to do whatever she wanted. 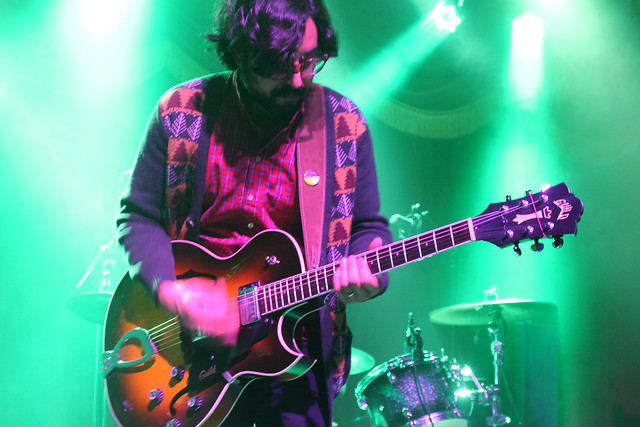 Released last month to critical praise from the likes of Rolling Stone and The Guardian Sharon Jones and The Dap Kings‘ latest effort, Holiday Soul Party offers some fun and soulful takes on holiday standards with a couple […]

Born and raised in Tampa, FL and currently located here in NYC, Camille Trzcinski, who performs under the moniker Camille TRUST is a singer/songwriter, whose sound according to her website is deeply influenced by Motown and […]

Recently Charles Bradley, the Screaming Eagle of Soul was on Jimmy Kimmel Live to perform “You Put A Flame On it,” one of the first batch of singles from Bradley’s incredible Victim of Love. And of […]