With the release of “Apertures” through 1-2-3-4 Go! Records, a self-titled EP through Cut The Cord That . . . Records and the “Escapement” 7 inch, along with what’s been described as a “head-turning” live show, San Francisco, CA-based post-punk quartet Synthetic ID — comprised of Nic Lang, Jake Dudley, and siblings Will and Paul Lucich — have developed a rapidly growing local and national profile, which caught the attention of Jim Dwyer, frontman of Thee Oh Sees and label head of Castle Face Records, who invited the band to play at Castle Face Records’ SF Holiday benefit show a few years ago. And as the story goes, the members of the band managed to keep in touch with Dwyer after his relocation to Los Angeles.

The San Francisco, CA post-punk quartet’s full-length debut Impulses  is slated for an April 22 release through Castle Face. Produced by Phil Manley, best known for his work with Trans Am and Life Coach, the album was recorded during one day at EL Studio and as you’ll hear from the album’s first single “Ciphers,” the material possesses the tense, urgency of the desperate and obsessively neurotic. Sonically, the band pairs slashing and angular guitar chords, propulsive four-on-the-floor-like drumming and a and throbbing bass line with the song’s minimalist shouted lyrics. In some way, sonically speaking the song sounds as though it draws from The Stooges, Gang of Four, Wire and  A Frames and others — in particular, I think of Gang of Four’s “Not Great Men,” and “At Home He’s A Tourist,” Wire’s “Three Girl Rhumba” and “Dot Dash,” The Stooges’ “1969” and “I Wanna Be Your Dog”  A Frames “nobot” and others. And much like those songs sonically and lyrically speaking, “Ciphers”captures and evokes a deeply post-modern sensation — that feeling that you’re somehow absolutely incapable of changing a ridiculous and dangerous repetitive cycle of emotions, thoughts and actions that you can only dimly comprehend; worse yet that you inexplicably feel drawn to compulsive thinking and actions and repetitive thoughts — to the point of obsession. It gives the song an unbridled, unresolved and desperate frustration that’s palpable and lingering.

New York-based electro pop duo Sofi Tukker can trace their origins to when members Sophie Hawley-Weld and Tucker Halpern, who were both attending Brown University  met at an art gallery. Hawley-Weld and Halpern quickly started writing music together, based around their desire of crafting accessible world music that could reach a wider audience. Upon the duo’s graduation, they relocated to New York, where over the following year the duo worked on the material that comprised their self-titled EP. 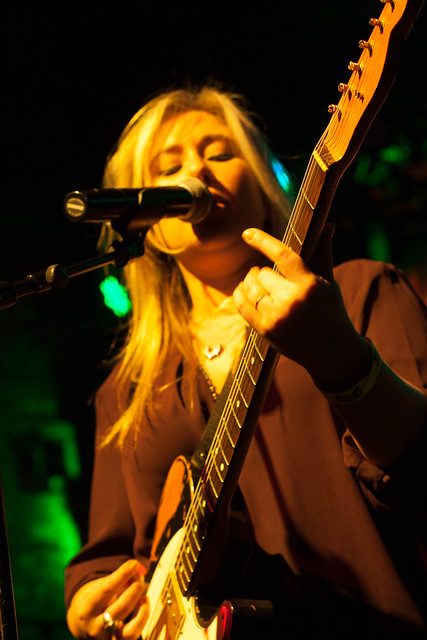 The Los Angeles, CA-based singer/songwriter Bedouine‘s work has largely been inspired by a nomadic youth. As the mysterious singer/songwriter explained in press notes “I love exploring different places and sounds. My childhood was this amalgamation […]

Although she’s the daughter of Alan Menken, the pianist and musical theater and film composer famously known for composing the scores of several beloved Disney animated films — including Beauty and the Beast, Aladdin, The Little Mermaid, The Hunchback of Notre Dame, Pocahontas and others, the New York-based singer/songwriter and JOVM mainstay artist Anna Rose has developed a growing national profile with the release of her self-titled EP, her full-length debut effort Nomad and her sophomore effort, Behold A Pale Horse. Whereas both her self-titled EP and Nomad were mostly acoustic-leaning singer/songwriter efforts with conversational and confessional lyrics, Behold A Pale Horse was a both a change of sonic direction and a bold, brassy announcement of an artist who finally found her most natural and singular voice. But if there’s one thing that holds all three of those efforts together, it’s the fact that all of them reveal that New York-based singer/songwriter and guitarist as a complicated and interesting woman who kicks ass and takes names, who is strong yet vulnerable, seductive yet innocent, wizened through experience and yet youthful.

Slated for release in 2016, Strays In The Cut EP is the long awaited follow-up  to Behold A Pale Horse and the EP reportedly has the New York-based singer/songwriter pushing her musical and songwriting boundaries. As Anna Rose explains in press notes  “I am very much an album artist and a storyteller, so the idea of scaling it all back to the size of an EP was a challenge in itself. It forced me to look at the songs in a different way, the production, everything. These six songs needed to tell the whole story. The limitations I placed on the length made the process so much more imaginative in every other aspect.” “Start A War,” Strays In The Cut‘s first single possesses a somewhat stripped down, country and blues-leaning arrangement that’s roomy enough for Rose’s unhurried and expressive vocals. It’s a slow-burning and spectral ballad full of lingering ghosts of past relationships and lovers, past resentments and a past that routinely finds a way to poke its way through your present at a random moment. But the song does so with a quiet and understanding acceptance a a subtle sense of regret.

Fronted by primary songwriter David Childs, the Philadelphia, PA-based rock band Manwomanchild can trace their origins to when the band originally formed in Rhode Island, back in 2008. With a lineup comprised of David Child (vocals, guitar and synths), Mason Neely (drums) and Craig Gifford (bass), the trio recorded their self-titled debut EP in February 2010, and they received international attention after the release of “Chile, La Roja,”a song specifically written to show support for Chile’s Men’s National Soccer team during the 2010 World Cup; in fact, the song was featured in 4 national newspapers and 2 national TV stations across Chile.

A couple of years after the release of their self-titled full-length debut at the end of 2010, the band relocated to Philadelphia, and since their relocation the band wrote and recorded the soundtrack for Decidedly’s mobile game, Floyd’s Worthwhile Endeavor — and the band’s last single “The Difficult Years” was released to praise from the music blog Surviving the Golden Age.

The band’s latest single “Return to Ithaca” sounds as though it were inspired by early 60s mod-era British rock — in particular, think of The Kinks — as the song pairs a pretty and hummable little melody with a bubblegum pop-leaning wistful hook reminiscent of “Video Killed the Radio Star” and The Kinks’ “I Go To Sleep” but somehow a little bit breezier. At the song’s core is the sort of wistful nostalgia that should be familiar to most of us — a familiar and beloved part of our lives and pasts getting torn down in the face of relentless progress. But the song also suggests that all things must pass and that life does as it always does — push you forward.

More important, “Return to Ithaca” is an time-specific example of finely crafted pop, complete with vivid novelistic imagery — you can practically picture yourself walking along the Charles River in Cambridge, MA with the same observations and thoughts of the song’s wistful narrator.

bells roar is the DIY solo recording project of Albany, NY-based singer/songwriter, producer and multi-instrumentalist Sean Desiree. Originally, the project began with just Desiree’s vocals accompanied by guitar but over the last few years, the project’s sound has taken on elements of hip-hop and electro pop, which has further expanded the project’s sound — all while allowing Desiree to keep her voice ever present.

Desiree first started to receive attention with the release of her self-titled debut, which featured drumming from Kiran Gandhi, who was part of M.I.A.‘s touring band during the Matangi tour. And as a result, Desiree had opened for the likes of MSMR, Mirah, K. Flay, and Chrisette Michele. Her sophomore effort, Second Chances, Vol. 1 was released through Tom Morello‘s Firebrand Records, and the effort, which was largely inspired by the work of renowned poet bell hooks thematically focuses on pushing back against white supremacy and speaking truth to power. Considering the events of the past 18 months and the emergence of the Black Life Matters movement, hearing music that fearlessly discusses the sociopolitical and socioeconomic issues of the day in a thoughtful and serious manner feels desperately necessary — especially since many of those issues are largely being ignored among mainstream radio-friendly artists.

“Slow (remix)” is the first single off Second Chances, Vol. 1, and the single is a slow-burning, atmospheric single comprised of slowly cascading synths, swirling electronics, mournful horns, stuttering and skittering drum programming and shimmering and angular guitar chords paired with Desiree’s piercing and achingly mournful vocals.  In some way, the song sounds as though it were drawing influence from the Cascine Records roster — moody, 80s-inspired synth pop but in this case with a powerful and needed message. And although the song feels incredibly and desperately sad, its tinged with hopefulness at its core — in some way it suggests that things can get better, but that it requires actual work. Maybe we can all learn from that, huh?

You can catch bells roar on tour. Check out the following page for info: http://bellsroar.tumblr.com/shows

for MS MR, Mirah, K Flay, and Chrisette Michele you can tell that her sophomore EP, due out November 13th, 2015 is going places. bell’s roar has the potential to be the voice of her generation and she refuses to be ignored.

Deriving their name from the name of a device used to torture and punish prisoners in Franz Kafka’s “In the Penal Colony,” Brooklyn-based band The Harrow can trace their origins back to 2008 when founding member […]