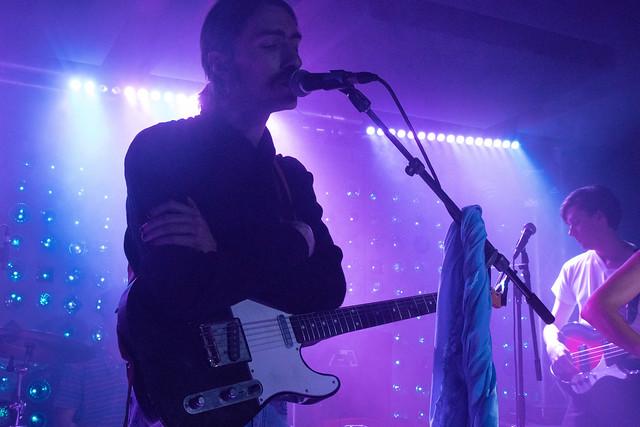 Comprised of Nigerian-born, Ottawa, Ontario, Canada-based singer/songwriter Deelo and Canadian-born, Ottawa-based producer and director Julian Strangelove, the up-and-coming electro pop duo Garçons can trace their origins back to when the duo initially met back in […]

With the release of EP Two, which was released earlier this year, the London-basd electronic soul songwriting and production act Two Another, comprised of Angus and Eliot, along with trumpet and additional production from frequent collaborator Nico Segal received attention for a sound that effortlessly messed classic, Motown-like soul with 90s R&B with slick, contemporary electronic production. As a result of the growing buzz surrounding the British electro soul act, they’ve opened for the likes of Daniel Caesar and SG Lewis.

Building upon their growing profile, the act recently released their latest single, the silky and soulful “Hoping You Changed,” which features a sinuous production that owes a debt to 90s R&B and neo soul,  complete with a funky and insistent bass line, fluttering electronics, and razor sharp hooks paired with soulful vocals and a slick, hyper modern production sheen. And while being remarkably radio friendly, the song reveals a careful yet self-assured attention to craft.

seyr are a rather mysterious London-based duo, who received attention locally and elsewhere for a spectral take on electro soul before going on a lengthy, self-described hiatus. Interestingly enough, the duo recently returned with One of Very Few, the duo’s latest EP, which was released on their new label Glass Ivy in collaboration with Back To Future Sounds — and the EP’s first single, “crowds” features a moody and spectral production consisting of shimmering and fluttering synths and stuttering drum programming paired with achingly tender and soul vocals reminiscent of Bilal, JOVM mainstay ACES and others.

While employing the use of both old timey stock footage with psychedelic imagery, the recently released visuals for the “crowds” further emphasizes the song’s aching loneliness and icy vibes.

Aerin Fogel is a Toronto, ON-based singer/songwriter and multi-instrumentalist, who may be best known for her stint as one-half of fuzz pop duo The Bitters, with Fucked Up’s, Young Guv’s and Bad Actors Records’ Ben Cook. The duo released critically applauded material through several renowned indie labels including Captured Tracks Records, Mexican Summer Records, Sacred Bones Records and Release The Bats Records, as well as festival appearances at SXSW, NXNE, and Woodsist/Captured Tracks Fest; however, Fogel’s newest recording project Queens of Swords finds Fogel specializing in sweeping and dramatic pop that aesthetically speaking nods at Siouxsie and the Banshees, PJ Harvey and others, but with huntingly ethereal melodies, as you’ll hear on her latest single off the project’s self-titled full-length debut, “Rise Instead.”

The recently released music video for the song, was recorded and directed by Danielle Aphrodite on grainy VHS and was devised as n ode to the stages of female empowerment; but it also manages to nod at the billowing and dreamy vibe of the song.

Now, if you had been frequenting this site over the past 12-18 months or so, you’ve likely come across a handful of posts on one of this site’s newest mainstay acts, the Bay Area-based electro pop/electro R&B/electro soul act The Seshen. Comprised of founding members Lalin St. Juste (vocals) and Akiyoshi Ehara (bass, production) with Kasha Rockland (vocals), Mizra Kopelman (percussion) and Kumar Butler (sampler), the Bay Area-based act have received attention from this site and elsewhere for a sound that draws from a broad and eclectic array of influences including  Erykah Badu, Jai Paul, James Blake, Radiohead, Broadcast, hip-hop, indie rock, electronica — with the result being a sound that managed to be simultaneously contemporary and retro-futuristic.
Over the past year, I wrote about the first three singles off the act’s sophomore full-length effort Flames & Figures — “Distant Heart,” a sleek and sensual, synth-based single that sounded as though it were influenced by 80s synth-based R&B and pop,  “Already Gone,” a sultry and sensual track that subtly nodded at Giorgio Moroder, and “Colors Collide,” which managed to nod at 60s-inspired psych pop and rock rock, complete with a shifting and morphing song structure held together by a hazy vibe. The album’s latest single “Right Here” consisting of retro-futuristic-leaning production featuring cascading layers of synths, xylophone, subtly African percussion, a sinuous yet propulsive bass line and ambient synths within an expansive song structure featuring rapidly shifting key changes and mood and razor sharp hooks — and while there’s a lot going on within the song, there’s enough room for St. Juste’s sultry and coquettish vocals to dart and float about. But perhaps most important, the latest single should remind listeners that the Bay Area-based act specialize in balancing an accessible, pop sensibility with an uncompromisingly challenging songwriting approach and sound.

Wallace Gollan is a Wellington, New Zealand-born, Sydney, Australia-based singer/songwriter, who performs under the mononymic stage name Wallace, and she has received attention across New Zealand, Australia and elsewhere for her jazz-influenced, soulful vocals — and for an overall sound that effortlessly meshes jazz, soul, neo-soul, the blues and hip-hop. And unsurprisingly, she’s been compared by some to the likes of Erykah Badu, Little Dragon and Carmen McRae. Now, if you’ve been frequenting this site for some time, you may recall that I wrote about Gollan’s collaboration with Sydney-based emcee and poet  Sampa The Great “Beauty,” which paired Gollan’s expressive vocals singing a positive message of how we all have the power to transform our lives for the better with a skittering, off-kilter production featuring jazz and hip-hop-inspired beats, twinkling keys and a shuffling bass line.

“Diaspora,” the Wellington-born, Sydney-based singer/songwriter’s first single of 2017 is a collaboration with the Sydney-based, Nigerian-Australian producer and vocalist Crooked Letter and interestingly the single is inspired by Gollan’s own experience of being part of a Diaspora as her Dundee, Scotland-born father had moved to Wellington as a child — and the single features Gollan’s brash and almost coquettish jazz phrasing paired with a production based around a looping Nigerian funk sample, stuttering polyrhythm and chopped up yet ethereal samples of Gollan’s own father appearing briefly within the track.  As Gollan explains in press notes about her latest single and her collaboration with Crooked Letter, “I wanted to highlight the connection that we both feel towards places where we didn’t grow up. We bonded over the idea that looking back at our roots gave us a sense of affirmation and appreciation for what makes us who we are.” And as a result, the song possesses a profound sense of gratitude and connection to something far older than where you may currently call home.

I’ve been in Washington D.C. for the past day and a half on a business trip related to my day job as an acquisitions editor at a SoHo, Manhattan-based publisher, and as a result I haven’t been able to post as frequently as I’d prefer; but at the same time I’ve been with two colleagues, who I met while in the Netherlands, who I’ve quickly become fond of and some extremely lovely folks in sales and marketing, some of who are based here in the States and a couple, who are based in the UK. But if you know me well enough, you know that I typically survive on 4-5 hours of sleep during the workweek and as it is I’m fitting in a post or two while my colleagues are asleep. So let’s get to the business at hand . . .

With the 2016 release of their self-titled double EP, the Sydney, Australia-based electro soul act The Goods, currently comprised of founding members, multi-instrumentalists and production duo Boris Bangaltar and Rosario D’Awesome, both of whom have toured and recorded with nationally known acts such as Touch Sensitive, Daniel Merriweather, Dereb The Ambassador and George Maple, and newest member Black Tree, who has a stint as a touring backing vocalist for Sydney-based soul singer/songwriter Ngaiire — and who started collaborating with the band on “Ninja Trolls,” the trio quickly developed a reputation for a sound that reportedly blurred the lines between disco, funk and classic house while nodding at Gorillaz and Outkast. And as a result, the then-duo received radio airplay across community radio and on Triple J. Adding to a growing profile, the act opened for Onra, Oddisee and Winston Surfsshirt.

“Make Your Move,” the first single from the newly constituted trio will further their growing reputation for a slickly produced track that sounds as though it nods to several disparate sources including DFA Records, classic house, 80s electro soul and contemporary electro soul acts inspired by the 80s, including Dam-Funk and others; in fact the track features Black Tree’s soulful and sultry vocals paired with a slick, thumping, club-banging production featuring arpeggio keys, wobbling synths, tons of cowbell, finger snap-led percussion, razor sharp yet infectious hooks and a feel, good, cosmic glow in what may arguably be one of the most dance floor friendly songs I’ve come across this year.

The recently released music video follows the trio as they wander around, and goof off around a rainy Sydney — but if you pay close attention, the trio slowly turn aspects of their world into bold, brilliant colors.