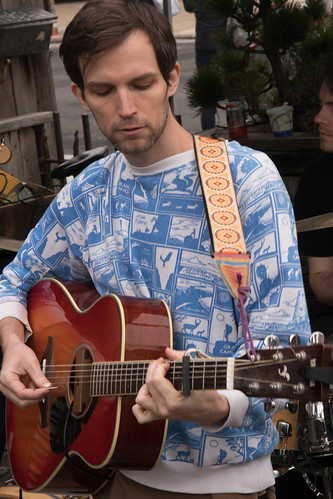 Kyle Thomas is a singer/songwriter and multi-instrumentalist, who’s the creative mastermind behind the critically applauded indie rock recording project King Tuff. And much like countless other musicians, Thomas grew up in a fairly musical home, where he was encouraged to play several different instruments — particularly guitar, keyboard and drums; but interestingly, it was a Fender Stratocaster that his father brought for him when he was 7 that served as a constant source of inspiration. After high school, Thomas spent his time writing songs and playing with a number of bands. “I would go on tour, but i never really took it as a serious job up until a couple years ago, when I decided to really make an effort at it. It’s been a real long, slow practice,” Thomas once publicly said.

Thomas’ first release was a self-made CD-R distributed by Spirit of Orr Records, and the album consisted of rough version of songs, white he later released on his official debut 2008’s Was Dead, which was released through Tee Pee Records’ sister-label The Colonel; however, after not receiving much attention for his work as King Tuff, Thomas went on to other creative pursuits including stints in bands like Witch, Happy Birthday and Ty Segall’s backing band, The Muggers. Thomas’ 2012 sophomore, Bobby Harlow-produced, self-titled, full-length effort was released by Sub Pop Records and charted at #21 on Billboard’s Heatseeker Albums chart while debuting at #14 on CMJ’s charts, before eventually climbing to #2, knocking Jack White’s Blunderbuss from its top charting position. 2013 saw the re-ssiue deluxe edition of Was Dead, which charted at #8 on Billboard’s Heatseeker charts.

Thomas’ third, full-length effort, 2014’s Black Moon Spell continued his ongoing collaboration with Bobby Harlow and featured Ty Segall as a guest drummer on the title track — and the album continued a run of critical and commercial success, with the album debuting at #1 on Billboard’s Heatseeker charts, and was once #1 on the CMJ College Radioplay chart.

Last week, Thomas released his first single in four years, “The Other” the album title track off The Other, which is slated for an April 13, 2018 release through Sub Pop Records. And while his self-produced effort will continue his reputation for hook-driven rock, the material reportedly finds Thomas ditching the goofy, rock-‘n’-roll bacchanalia for much more expansive arrangements, a diversity of instrumentation with lyrics that also reportedly straddle the fence between painful rumination and reconnecting with the childlike and innocent aspect of yourself. Additionally, the album features guest spots from Ty Segall (drums), Jenny Lewis (vocals), Greta Morgan (vocals) and Mikal Cronin (saxophone).  And while being a decided change in sonic direction, Thomas views the album as a psychic reset of him. “I let the songs lead me where they wanted to go, instead of trying to push them into a certain zone. King Tuff was always just supposed to be me. When I started doing this as a teenager, it was whatever I wanted it to be. King Tuff was never supposed to be just one thing. It was supposed to be everything.”

“Psycho Star” is The Other’s first official single is a funky and soulful track based around an arrangement of arpeggiated keys, sinuous bass line, shuffling drums, wah wah pedal effected guitars and a disco-like hook but lyrically the song finds its narrator musing about his place in an indifferent and mysterious universe. It’s obvious that the viewpoint on the album is to look upward and outward towards the cosmic, the infinite.

Directed by Cameron Dutra, the recently released video for “Psycho Star” is a surreal concept that follows the video’s director, King Tuff and backing dancers as they’re about to shoot their video but pulls back to focus on some of the random passerby, a roller skater lost in her music, and a paranoid truth-teller and psychic. At times, the visuals are gloriously lo-fi, nodding at VHS video and cheap car dealership commercials while at other points, being remarkably slick, as well as a mediation on life and death.

If you’ve been frequenting the site over the past 15-18 months or so, you’ve likely come across a post or two on JOVM mainstay act, Toronto, ON-based proto-metal/doom metal trio CROSSS. And although the band is rather […]

If you were frequenting this site last year, you may recall coming across posts on Toronto, ON-based proto-metal/doom metal trio CROSSS. And although the band is rather mysterious and little is publicly known about the band’s personnel I can tell you that the band, which originally began as a Halifax, Nova Scotia-based duo, went through several lineup changes before relocating to Toronto and settling on the band’s current configuration. Since relocating to Toronto, the trio have developed a reputation for crating murky, sludgy and intense dirges that are deeply inspired by proto-done, lo-fi indie rock, noise rock and metal, and as a result bear a sonic resemblance to the likes of Black Sabbath, A Place to Bury Strangers and others — but more bottom heavy and doom-laden as you’ll hear on “Interlocutor,” off their last effort, LO which, was release to quite a bit of attention across the blogosphere.

Naturally, as a result of the attention they received, the Canadian trio opened for the likes of Viet Cong, Built to Spill, Thee Oh Sees, King Tuff, Dirty Beaches, Pop1280,  Oneida, Built to Spill, METZ, Grimes, Fuzz and Moon Duo among a growing list. But adding to a growing profile, CROSSS announced that they had recently signed to Joyful Noise Recordings, who will re-issue the trio’s first two efforts, 2013’s Obsidian Spectre and the aforementioned LO — and they also announced that they’ll be releasing their third full-length effort later on this year. In the meantime, check out “Eye Seance” a doom-laden and lo-fi-leaning dirge  that has the trio pairing rumbling down-tuned bass, enormous power chords with howled vocals in a song that sounds like an existential howl into an indifferent and cruel void.

The band will be embarking on a Stateside tour throughout the end of this month and April, and it includes a NYC area stop. Check out tour dates below.

Originally begun as a duo in Halifax, Nova Scotia, Canadian band CROSSS after several relocations and lineup changes is currently a Toronto, ON-based trio who have developed a reputation for crating murky, sludgy and intense […]

CROSSS is a Canadian trio whose sound is heavily inspired by porto-drone, lo-fi indie, noise rock and metal. Originally begun as a duo in Halifax, Nova Scotia and after a number of relocations and lineup […]

Originally based in Vermont and now based in Los Angeles, the power pop/garage rock artist King Tuff (a.k.a Kyle Thomas) released his newest single, “Screaming Skull” to celebrate the announcement of added dates to his fall/winter […]