Currently comprised of the band’s founding duo Julian Ducatenzeiler (vocals, guitar) and Tony Malacara (bass), along with newest members  Shane Stotsenberg (guitar), Cameron Gartung (drums) and Ignacio Gonzalez (organs), the Los Angeles-based garage rock/psych rock act Mystic Braves can trace their origins to when Ducantenzeiler and Malacara formed the band in San Diego in 2011. Since then the band has gone through a series of lineup changes but their current lineup was solidified in 2013 when Ducantenzeiler and Malacara relocated to Los Angeles, where they recruited Stotsenberg and Gartung. As a quartet featuring Ducatenzeiler, Malacara, Stotsenberg and Gartung, the band had begun writing material and touring while searching for a full-time organist  when they found Gonzalez.

Mystic Braves’ fourth album, The Great Unknown is slated for an August 17, 2018 release through Lolipop Records, and the soon-to-be released album found the band recruiting Kyle Mullarky, who has worked with The Growlers and The Allah-Las. The band spent a week at Mullarky’s Topanga Canyon, CA studio exploring new sounds and approaches and cutting demos, and as the band’s Julian Ducatenzelier says in press notes, “We just wanted to work with him to help shape the songs creatively, but he ended up being so great to work with that we just stuck with him.”

After recording somewhere between 30-40 demos at Mullarky’s studio, the band returned to their hometown, holing up in Lolipop Records‘ new office/studio/living quarters in the Boyle Heights section to record the final versions of the songs that would comprise The Great Escape. “We spent three days a week at Lolipop for about a month and a half, all living together, writing, recording, grilling, drinking too much tequila and coffee,” Ducatenzelier recalls. “We decided to get a little experimental—some of the songs came out sort of country and some were super funky, almost like James Brown.”

Sonically, the material channels The Seeds, The Zombies, The Kinks and others — but while earnestly maintaining a unique sense of individuality, which Ducatenzelier attributes to the album’s deeply personal nature. “A lot of this record comes from a breakup,” he explains. “It deals with the end of past relationships, with knowing that things should end, and figuring out how to cope with the loss.”

The album’s latest single “Under Control” is a shimmering bit of lysergic-tinged bubblegum pop centered around some timeless rock ‘n’ roll tropes: the inevitable end of a romantic relationship, the desperate attempt to move forward as time passes by, the acknowledgement that many things in life are unresolved and unfulfilled — and of life’s fleeting nature. Of course, the song naturally has the band balancing between a swaggering and hook-laden arrangement reminiscent of The Castaways “Liar Liar” with an earnest and familiar heartache.

The members of Mystic Braves are currently touring across Europe to support their new album, which they’ll follow up with al lengthy US tour throughout the fall that includes a September 15, 2018 stop at Rough Trade. Check out the tour dates below.

Now, if you’ve been frequenting this site over the past few months, I’ve written a couple of posts on the Boston, MA-based guitarist and songwriter/composer and bandleader Matthew Stubbs. And as you may recall, Stubbs, has split his time as a member of Charlie Musselwhite’s touring band and as a solo artist, who has released two solo, instrumental albums — 2008’s Soulbender released through Vizztone Records and 2010’s Medford and Main released through Chicago, IL-based Blue Bella Records that drew from the  Memphis, TN soul/blues sound. In 2016 Stubbs added bandleader to his resume, with his backing band The Antiguas, which feature Just Lopes (organ), Chris Rivelli (drums) and Marc Hickox (bass)  — and while continuing with the instrumental composition approach of his previously released work, his newest project is influenced by the work of Duane Eddy, Link Wray, and Booker T but meshed with elements of garage rock, B movie soundtracks and Afrobeat, while focusing on putting the energy and vibe of their live sets on wax.

The band’s self-titled debut was released earlier and this year, and as you may recall album singles “Death Grip” and ” Unwinder,” possessed a decidedly retro feel, bringing to mind late 60s and early 70s B movie soumdtracks, complete with a tight groove —with Death Grip” being inspired by the wild, chase scenes in the cult, car racing movies of the 70s while “Unwinder,” found Stubbs and his Antiguas drawing from 60s psych rock and surfer rock and blues, complete with an organ sequence that brings to mind The Castaways’“Liar Liar.” The album’s latest single “Bastille Day” is a greasy and downright funky track that draws from the blues, Afrobeat, dub and rock within what sounds to my ears like a 12 bar blues — and while expanding upon the sound that has caught attention, the composition will further Stubbs’ reputation for crafting slick and trippy hooks.

Directed and edited by Jack LeMay, the recently released video was shot at the Yawkey T stop in the Boston area, and stars Stubbs, waiting for a train when he encounters the absolutely radiant Monishita Ray, dressed in traditional Indian garb. The video turns into a psychedelic experience when the two look into each other — and the rest of the video splits between following Ray as she dances around the train station, Stubbs’ and company’s rehearsal space and other industrial-like locales, adding a surreal sense of beauty to everything in her path, and Stubbs playing the song’s main riff, before getting even trippier. 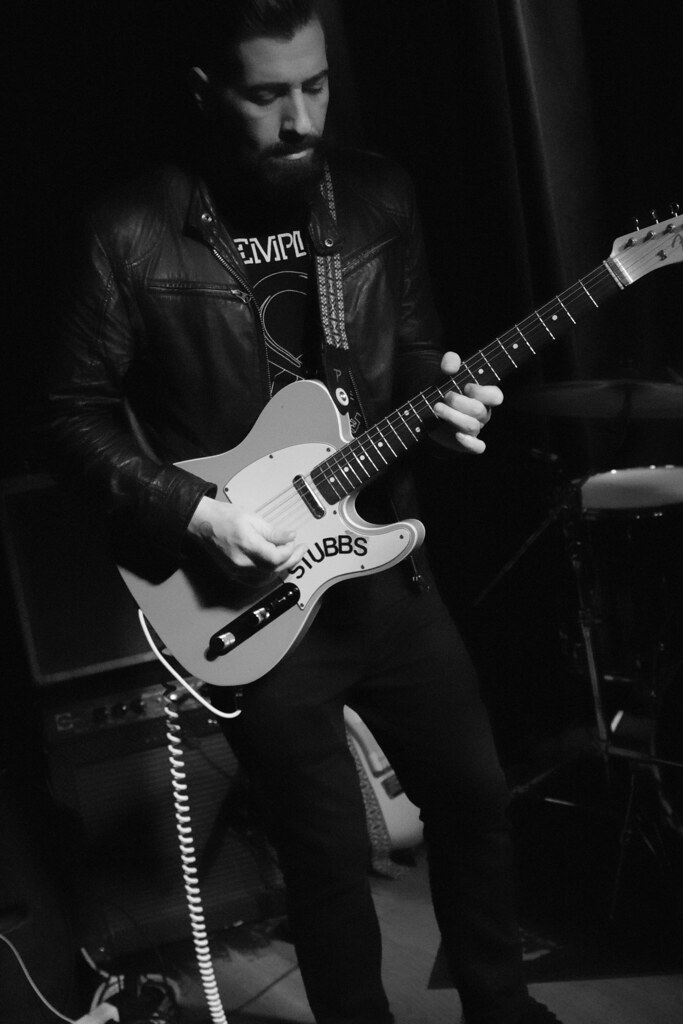 Matthew Stubbs is a Boston, MA-based guitarist and songwriter/composer, who has been Charlie Musselwhite’s touring guitarist since 2007, and as a solo artist has released two solo instrumental record, drawing from the Memphis, TN soul/blues tradition, 2008’s Soulbender released through Vizztone Records and 2010’s Medford and Main released through Chicago, IL-based Blue Bella Records. In 2016, Stubbs, along with Just Lopes (organ), Chris Rivelli (drums) and Marc Hickox (bass) as an instrumental, psych rock-based project inspired by the desire of bringing back popular instrumental work along the lines Duane Eddy, Link Wray, Booker T and others, mixed with elements of garage rock, the blues, movie soundtracks and Afrobeat, — all while focusing on the vibe and energy of the live performance.

The band’s self-tiled full-length debut is slated for a January 26, 2018 release and from “Death Grip” and ” Unwinder,” two singles off the soon-to-be released album, the material on the band’s self-titled debut manage to have a decidedly retro vibe, sounding as though they could have been part of the soundtracks to late 60s and early 70s B movies but with a tight groove; in fact, as Stubbs says of “Death Grip,” “The song was inspired by the wild scenes in those cult, car racing movies of the ’70s. I wrote it with that cinematic, yet frenetic approach in my mind.” “Unwinder,” on the other hand finds Stubbs and company, drawing from 60s psych rock and surfer rock and blues, complete with that soaring organ sequence — and they do so in a way that nods at The Castaways’ “Liar Liar” but with a subtle nod at shoegaze and dub.

The Blank Tapes is the solo recording and musical project of the California-based Matt Adams. A native West Coaster, Adams has spent the past ten years or so developing a reputation for writing stoner/psych pop […]

The Berlin, Germany-based label and music publisher, Snowhite Records and its Public Relations division, Snowhite PR works with number of artists known across Germany, Switzerland and Austria, as well as several acts known on this side of the Atlantic including — […]

Seattle, WA-based quartet La Luz released a cassette tape earlier this year through Burger Records, and it included the great single “Sure as Spring.“ And through that single, there was one thing that was absolutely certain — […]

Seattle, WA-based quartet La Luz released a cassette tape earlier this year through Burger Records, and it included the great single “Sure as Spring.” And through that single, there was one thing that was absolutely […]

The Portland, OR-based quartet of Paradise took over the Eagle’s Lodge to shoot the official video for “Humans and Stars,”“the second single off their debut full-length album, Diary of an Old Soul. As you can see, […]

http://bandcamp.com/EmbeddedPlayer/v=2/album=2814135316/size=venti/bgcol=FFFFFF/linkcol=4285BB/ Jeffery Drag Records has put together a collection of their best singles, exclusive B sides, forthcoming releases and overall best of 2012 for their Winter mixtape. I’ve played this several times and it’s a […]