Currently comprised of founding member Natalie Hoffman (vocals, guitar, synth) with Charlotte Watson (drums) and Madison Farmer (bass), the Memphis, TN-based punk rock  act Nots quickly rose to national prominence with the release of their full-length debut, 2014’s We Are Nots, an effort that sonically drew from 60s garage rock, 77-era punk, thrash punk, No Wave and New Wave. 2017’s sophomore effort Cosmetic found the act expanding upon the sound that first caught the attention of the blogosphere and elsewhere, while lyrically commenting on sociopolitical concerns — in particular, the album focused on the rough and complicated edges of desire, deceit and distortions. and how they impact appearances and your sense of reality.

Last year, the band went through a significant lineup change with longtime keyboardist Alexandra Hoffman leaving the band. Understandably, the threat of the band losing Eastburn’s hammering synth progressions resulted in some growing pains for the band. But when the newly constituted trio arrived at Bunker Audio to recored material with their longtime friend, collaborator and engineer, Andrew McCalla, each member fully embracing the band’s new identity and approach. Rather than completely abandon the noisy synth attack aspect of their sound, Hoffman decided to take up synths. Slated for a May 10, 2019 release through their longtime label home Goner Records, the band’s forthcoming album, the aptly titled 3 should be seen and understood as something altogether different from its predecessors.”Once we really leaned into the space that being a three-piece afforded us, our writing started to make better sense and connect,” the band’s Natalie Hoffmann explains in press notes. “It made for a more interesting record than if we stayed comfortable and safe in the way we were writing.”

Reportedly through the entire album, the band explores themes of lost control, societal division and strife, the loss of reality in performance and how exhausting it can be to navigate the blurry lines between playing an actor/performer and playing human. And while continuing in a similar heady thematic space as its predecessor, the band’s forthcoming third album was recorded live — but with an intense, improvisational energy to the proceedings. 3’s first single, “Half-Painted House” is centered by a propulsive bass line, wild squealing feedback and synths, shouted lyrics, shouted lyrics and a mosh pit friendly hook — and while bearing a resemblance to Cosmetic, the hypnotic track may arguably be one of the darker songs they’ve released to date, as the song is “about being stuck in a haze of repetitive cycles while change proves to be both stubborn and elusive. The veneer of what it looks like to be ‘normally functioning’ during these tumultuous times is peeling to reveal a mind struggling to keep from turning against itself,” Hoffman explains in press notes.

Nots have confirmed a handful of SXSW sets and a couple of live shows. There will be more coming in the near future; but in the meantime, check out the live dates below. 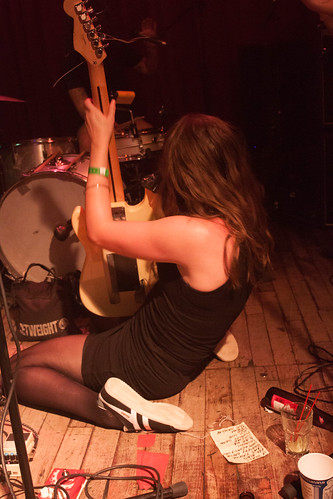 With the release of 2014’s We Are Nots, the Memphis, TN-based punk rock quartet Nots, currently comprised of founding member Natalie Hoffman, along with Charlotte Watson (drums), Madison Farmer (bass) and Alexandra Eastburn (synths), quickly rose to national prominence for a sound that possessed elements of 60s garage rock, punk, thrash punk, No Wave and New Wave. And since 2014, the Memphis-based punk quartet has been rather prolific, realizing a handle of singles that revealed a band that had expanded upon their sound while lyrically focusing on deeper, sociopolitical concerns; in fact, Cosmetic, Nots’ sophomore effort thematically focused on the rough and complicated edges of desire, deceit and distortions — and how they impact both appearances and your sense of reality. And in many ways, the album seemed to capture a narrator struggling to find some kind of footing in a vicious, perverse and fucked up world.

Now, a little bit of time has passed since I’ve written about the JOVM mainstays but they’ve been busy writing and recording new material — including their forthcoming 7 inch single “Violence”/”Cruel Friend,” which is slated for a June 30, 2017 release through Goner Records. And from the single’s “A side, “Violence,” the band has further experimented with their sound, pushing their sound in new, weird directions — all while still remaining a wild, feral rock band; in fact, the band replaces most of the guitar work for layers of buzzing and forceful synths, and as a result, it gives the song a razor sharp sense of menace and irony.

Cosmetic’s third and latest single “Inherently Low” is presciently and strangely fitting for our increasingly surreal times while continuing with the album’s overall theme. Sonically, the band pairs angular guitar and bass chords, propulsive drumming and shouted lyrics — and the end result is a song that evokes creeping dread and unease and while boldly and furiously calling out hypocritical bullshit. Simply put it’s a song with a narrator that simply has stopped giving a fuck.

The recently released video was created and edited by the band’s Natalie Hoffman and was influenced by the results of last week’s Presidential Election. And as Hoffman explains in press notes “the tension and fear that came with the results certainly played a part in the visual outcome of the video. America has elected someone who has openly campaigned to keep us low. To keep us completely divided. To keep us at war. I don’t think that I (or anyone) can fully process the weight of what is to come, but this video is an attempt to translate both what the song is about, and how I’ve felt since the election results – a new awareness, anger, and fear about being kept inherently low.”

With the release of their 2014 full-length debut We Are Nots Memphis, TN-based synth punk/thrash punk/noise punk quartet Nots, featuring their current lineup of Natalie Hoffman (vocals, guitar) and Charlotte Watson (drums), Madison Farmer (bass) and Alexandra Eastburn (synths) have received a growing national profile and became JOVM mainstay artists for a sound that owes a great debt to 60s garage rock, punk, thrash punk, no wave and new wave — complete with a frenetic, unhinged and deeply visceral feel. Since the release of We Are Nots, the band has released a number of singles, including the “Shelf Life”/”Virgin Mary” 7 inch, which revealed that the Memphis-based quartet had been expanding upon the sound that had first captured the attention of the blogosphere, as well as focusing on deeper thematic concerns.

September 9, 2016 will mark the release of Nots highly-anticipated sophomore effort Cosmetic through Goner Records, and the album reportedly focuses on and attacks the rough edges between desire, deceit, appearances and reality. And as the band’s frontwoman Natalie Hoffman explains in press notes, the album’s first single “Entertain Me” “is a song in a constant state of movement and deterioration around one central, repeating part. No two live versions of it sound the same. Drawing influences from experimental no wave, postpunk, and psychedelic music, ‘Entertain Me’ takes its cues from the edges of genres, where one begins to blend into another, and nothing is easily classified. The lyrics reflect the cyclical, distorted nature of the song, addressing different facets of the grotesque horror show going on in American politics and how they are portrayed- the rise of Trump, the reality-TV-like nature of American news, the almost-forced compliance of the viewer, and the for-profit-constructed “right” of the viewer, the consumer, to require constant entertainment in order to participate, and to live.”

Clocking in at a little over 7 minutes, “Entertain Me” is arguably Nots’ noisiest, most frenetic and most sprawling song as swirling layers of guitar chords are played through wah wah pedal and other distortion pedal, furious bleeping and squeaking and squawking synths, howled vocals fed through distortion and propulsive drumming are held together (somewhat) by a a throbbing and insistent bass line in a song that structurally and sonically reminds me of The Church‘s “Chaos” and Disappears‘ “Kone”  — but angrier and much more abrasive, as though capturing the frustration, powerlessness of its narrator, a narrator who is struggling to find some footing in a perverse, fucked up world.

Over the past year or so, Memphis, TN-based  quartet Nots and their Stateside label home Goner Records have become JOVM mainstays as I’ve written quite a bit about both the band and their label; in fact, Goner Records have quickly established themselves as the label home to some of the country’s best hardcore punk and hard rock bands, as they have been the label home to the likes of Ex Cult, whose Midnight Passenger and Cigarette Machine EP have been two of the best (and angriest) punk albums I’ve heard in about 5 years, OBN IIIs who have released several albums of swaggering power chord party rock in the vein of early AC/DC, the late Jay Reatard and several others. And with the release of their debut effort, We Are Nots, the Memphis-based quartet comprised of Natalie Hoffman (guitar) and Charlotte Watson (drums), Madison Farmer (bass) and Alexandra Eastburn (synths) started to receive national attention for material that sounds as though it owes a debt to the 60s era garage rock, punk and new wave – but with a frenetic, unhinged and very visceral feel.  Personally, I think the Memphis-based quartet’s debut effort should have received much more attention as their sound and aesthetic can be compared favorably to The Fall, Bikini Kill, Protomartyr, The B52s and others.

Renowned British indie label Heavenly Records licensed Nots’ We Are Nots and are releasing the effort across the UK on the 20th. The quartet will touring across the UK and the Ehe European Union to support the British/EU release of their debut effort — and to further celebrate the British/EU release of We Are Nots, the band in concert with Heavenly Records released a 7 inch of non-album material featuring “Shelf Life” as a B side to their latest single “Virgin Mary.”

“Shelf Life” is a messy, murky, lo-fi garage psych rock song comprised of relentless, chugging guitar chords, propulsive drumming, layers of distortion and feedback and shouted vocals that rushes in and out in a breakneck 1:43. And although the song kick ass, it manages to reveal a band that’s subtly and playfully expanding their sound while remaining familiar.

Naturally, when most people think of Memphis, TN and of its vibrant music scene, they would probably name-check a number of that city’s soul, funk, hip-hop and country acts that have called Memphis home. However, over the […]

Memphis, TN-based label Goner Records has put a city best known to the rest of the world as the home of soul, funk and hip-hop on the map for having a vital punk rock that […]

Certainly, when most people think of Memphis, TN’s music scene, they would likely think of the countless soul, funk. hip-hop and country acts that have called that city home; however, up until last year, Memphis […]

If you’ve been following this site, specially over the last few weeks, you would have come across several mentions not just of Memphis’s music scene, but also of Goner Records, the label home of that city’s burgeoning, […]