He’s also a member of the acclaimed DJ quartet Pardon My French — and runs his own electronic music label CONFESSION, which has released work by the likes of Malaa, Mercer, AC Slater, Dustycloud, Loge2 1 and others.

The French artist’s highly anticipated album Year Zero is slated for release later this year and so far, he’s released two singles “Proud” and “Ghosts” off the album. Building upon  the attention of those singles, Tchami begins 2020 with two more singles off the album — “Born Again,” and the album’s latest single “Buenos Aires.” Centered around stuttering and skittering beats, chopped up and looped vocal samples, arpeggiated synths and an enormous hook, “Buenos Aires” is a euphoric banger that nods at the New Jack Swing-inspired sound of French Horn Rebellion with a bit of early 90s house. The accompanying video features cinematically shot time lapsed video of some of the world’s most beautiful, well-regarded locales, including the aforementioned Buenos Aires.

Le Couleur is Montreal, Quebec-based electro pop band that consists of Laurence Giroux-Do, Patrick Gosselin and Steeven Chouinard, and with the release of 2010’s debut effort Origami, the trio received attention both across Europe and in their native Quebec for a decidedly French take on synth pop and disco pop. As a result of growing buzz around the French Canadian trio, their debut was propelled to the top of Quebec’s independent radio charts.

Le Couleur’s 2013 French Fox-produced Voyage Love EP found the trio collaborating with the members of French Horn Rebellion on an effort that found the act expanding upon the sound that first caught attention, winning further attention internationally. In fact, the act played a number of festivals across the international festival circuit including stops Pop Montreal, Liverpool Sound City and M for Montreal. The EP was also nominated for a GAMIQ Prize for Best EP of the year. Building upon a run of critically applauded material, the act’s 2015 Dolce Désir EP won the GAMIQ Prize for Electronic Music EP.

The French-Canadian act’s latest single “Le Dernier Noel” is a special (and mesmerizing) Christmas track for their fans, centered around shimmering synths, jangling guitars, ethereal vocals and a slick, radio friendly and dance floor friendly hook. And while being a fairly traditional Christmas tune, the Le Couleur rendition manages to be much more indirect and subtle in its spirit. 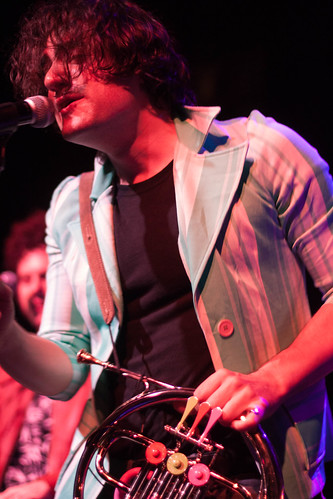 Los Angeles, CA-based duo Woolf and the The Wondershow received attention across the blogosphere for their breezy and upbeat New Jack swing/French Horn Rebellion inspired pop track “Cloaked,” a song that possesses dense layers of synths, […]

Lucio Morais is a Sao Paulo, Brazil-based DJ and producer, best known as one half of the renowned electronic music duo Database. And with Database, Morais has worked with Fatboy Slim, Dragonette, Mark Ronson, French […]

Mario Rdz is a producer and sound engineer, who has released 80s inspired synth-based dance pop under the moniker of That’s Nice since 2013. His latest single, “Holiday” featuring Miami Horror’s Josh Moriarty has blown […]

As I’ve mentioned a number of times on this site, I receive an enormous amount of email from a variety of music industry folks, and I recently received an email about an electronic music artist […]

This past year has been a pretty big year for electro pop act, French Horn Rebellion as they’ve collaborated with Jody Watley, and in a Billboard interview, they reveal that further collaborations with Ghost Beach, St. Lucia […]